It was overcast and cool this morning. There were coffee and various kinds of pastry and fruit in the office and that was the meeting place. We had in room coffee, but it seems this was due to the kindness of an unnamed stranger and not the hotel management. Thanks, Sherm (I think). 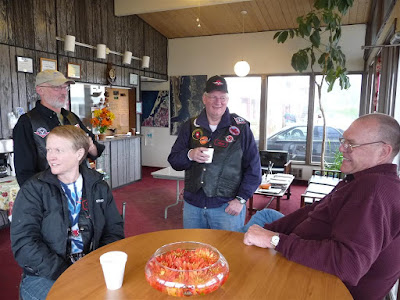 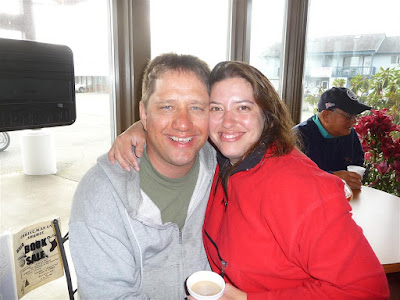 More lovebirds - one of our favourite couples, Malachi and Corvette

Sherm worked on this ride for a long time. I know he rode the course at least three times and made arrangements so that everything would go smoothly. It did. 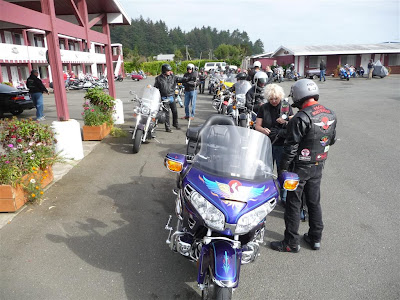 The group lined up at Cap'n John's right on time for the 9:00 AM departure. Cap'n Sherm gave some basic group instructions and told the riders of points of interest to watch for on the first leg. Sandy and I, equipped with a CB radio and able to talk to the leader, lined up at the back (almost).

The ride left town the way we entered, via Seven Devils Road and Beaver Hill Road to US 101. 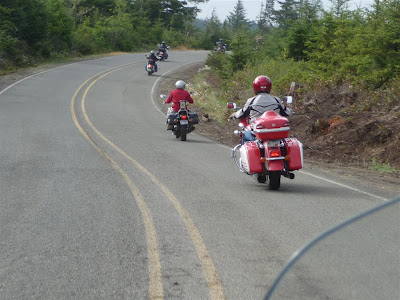 The group moved south on 101 to Bandon or, as the banners say, Bandon By The Sea. We rode into Old Town Bandon and parked by the waterfront. 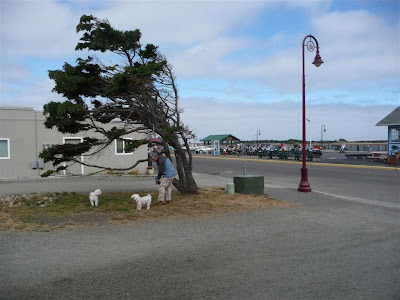 A nature formed bonsai. It was easy to determine which way the prevailing winds blow. Tom Thomson would have loved this tree. 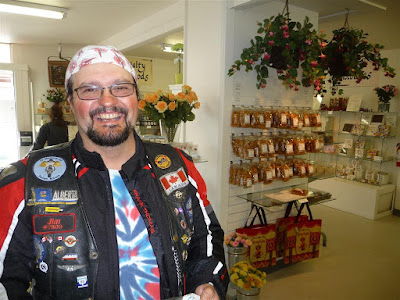 The major Bandon attraction was Cranberry Sweets, a candy shop. They have free samples of most of their wares. We bought a number of things, especially a package of cheddar cheese fudge. Before you cringe too much, it tastes different but not bad at all. I also for a 1/4 pound peanut butter cup. Here, Jim is looking like a Canuck in a candy shop. 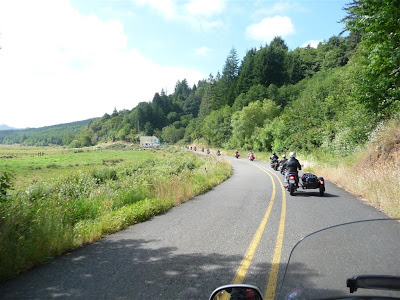 From Bandon, we left the main road and wound through the countryside on some delightful roads. Mark ended up with his Triumph/Velorex sidecar outfit ahead of us. The chair is light and prone to flying on right handers but Mark handled it masterfully. 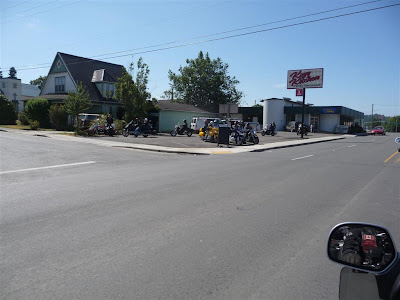 The Kozy Kitchen in Cypress Point. A couple of days ago, King Hussein of Jordan and his entourage, on a tour of the northwest by motorcycle, stopped here for lunch. They had a sign out front that said "Try our mushroom Swiss burger. Fit for a King." So today, it was us. They had a back room set aside for our group. Service and food were excellent. BTW, the King explains the group of Harleys we saw heading down 101 yesterday escorted by four police bikes. 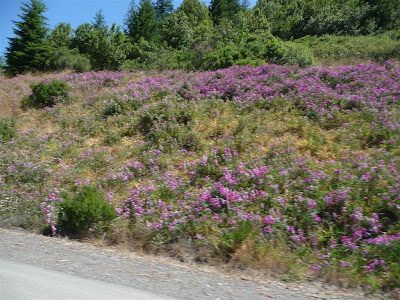 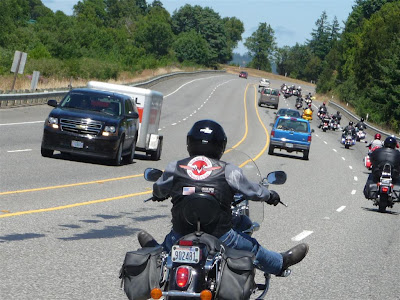 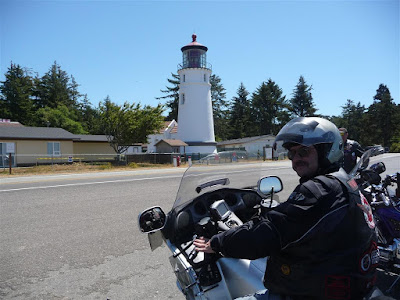 Umpqua Lighthouse near Reedsport, north of Coos Bay on US 101. We didn't have a lot of pictures after Coos Bay because the battery in the camera died. I forgot to charge it last night. This photo was taken using Sherm's battery but he needed it back afterwards.

From the lighthouse we went on to Reedsport to see Guy Mobley, current proprietor of Sherm's Cycle Products. Guy is responsible for efforts that have gained SCP a number of records at the Bonneville Salt Flats. After that, the group broke up. Some went on to look for elk while some of us returned to Charleston. Malachi had given Sherm a beaded seat to try and I snagged it to check out on the ride back. I didn't hardly notice it was there. Perfect. Thanks, Mal, I'm keeping it.

This was one of the best rides I have been on in a very long time. Thanks for all the efforts, Sherm. A job well done. 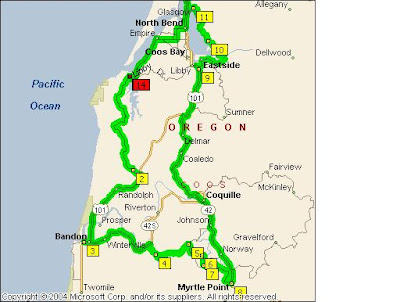 The southern part of Sherm's Ride
The north part was straight up 101 and back
Meanwhile, Back At The Ranch

After the riders returned, we adjourned across the street to the Portside Restaurant, home of some good seafood and a lounge singer of no particular renown. Actually, there was nothing wrong with the singer that earplugs wouldn't fix. No photos because the battery was now charging.

We got word that Pat had taken Sherm to Emergency with severe lower back pains. I knew that something was wrong this morning when he didn't eat his breakfast at the Kozy Kitchen. Sherm never skips food. Our layman's guess was kidney stones. Another rider from Washington, Brian Graham, wrecked riding back alone from the Rogue River tour. No details yet this evening.

Lisa asked if I could cover Sherm's Ride tomorrow. I have no idea where those back roads were, but I'll figure it out somehow. 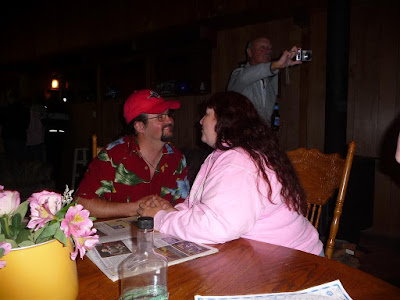 More lovebirds at the Beach House. Jim and Cat, as if you didn't already know. 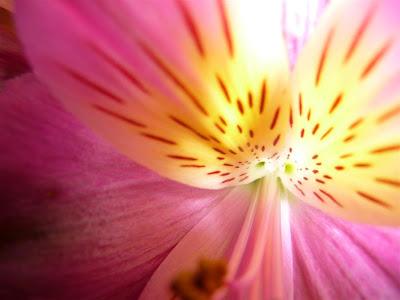 Part of a camera comparison between DD and I

The Beach House was bubbling with energy. Some members chose to stand outside where the bonfire was taking the edge off the cool breeze. Jamey T carried a bottle of Mississippi Mud Black And Tan Beer all the way from South Dakota in response to a comment I made comparing American beer to having sex in a canoe. I don't drink beer but I had some of this in honour of the effort he made. It wasn't half bad. It WAS half British, though:-)
Didsbury Dave and I have new cameras and started comparing performance. I think it was a tie but he paid less for his so I'll have to give the win to him. But mine photographs the inside of flowers better.

I went to bed about 11:00 wondering where I would take Sherm's trusting riders tomorrow.
Posted by Jim "Skid" Robinson on 7/18/2008