The alarm was set for 6:00 AM but a neighboring rooster had Sandy going at 5:00. Mary was getting set to go kayaking on Puget Sound while Steve had those funny work clothes on again. We had coffee and discussed the route down the coast. Steve will be at Oregon Trails next week, hopefully dressed more like himself. 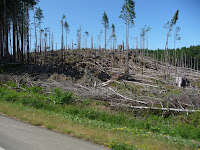 Out of Olympia, we took SR 8 to Montesano and then SR 107 to the famous US 101. This went inland for the first stretch through low, rolling coastal mountains. The log trucks and the cut areas give testimony to the fact that lumber is king around here. There were clear cuts still needing cleaning, bare areas, and many replanted sections in varying stages of growth. In Raymond, we started running closer to the water. Traffic was still light and there was generally a remote feeling to this place. 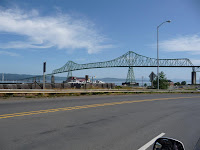 That was until we came to the long bridge crossing the mouth of the Columbia River and the state line. It ended in Astoria, Oregon and Sandy got a photo of the elevated span after we were off it. Steve know about my acrophobia and was concerned about the bridge height, but this has nothing on the Big Mac back home.

Once in Oregon, things became immediately more built-up. The road went up and down along the shore and, since it was low tide, the ocean smell was very noticeable. I'd like to get this bottled so I could spray it around home from time to time. 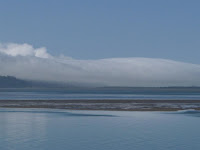 From Cannon Beach (Steve said there was a nude beach but we didn't see it), with its signature Haystack Rock (which can be seen in the scenery post), on down to Rockaway Beach and Garibaldi, the sense of seaside tourist places is very strong. The shore line was occasionally obscured by fog patches causing the temperature to go up and down. Then at Tillamook, home of the cheese and surrounded by dairy farms, we went inland for a while until we arrived at Cloverdale.

Again, the tourism business was significant. Lincoln City reminded me of Ocean City, Maryland. Depoe Bay, billed as the world's smallest harbour, had some very affluent looking houses constructed along severely eroding seaside bluffs. Doesn't make sense to me. I wonder if they can get insurance? Further down, we got into a series of rocky headlines typified by Cape Perpetua. These high, steep edged roads can give those of us who dislike heights some serious fits, especially when the offshore winds are gusting and swirling. At spots, gnarled cypress trees have been shaped by the winds like demented bonsais.

South of here, the rocky shores gave way to sweeping dunes. We passed through Florence, where we had camped in the dunes 30 years ago this month on our first ride down the west coast. Finally, we arrived at Coos Bay and, although I remembered Sherm's street, I forgot the house number. He and Pat were in Eugene having some work done on his Kia and helping a friend select a laptop computer and his cell phone wasn't answering. I called Steve and got the number.

Although no one was home, the side door was open and we were able to get the bike into the garage and unpack it. Our home would be the Kwik-Camp trailer set up in the garage since they sold the 5th wheel that we had used last time. Tom and Denise from Kentucky will be using this same trailer for Oregon Trails.

Sherm and Pat were back shortly after we got there. After ensuring that we had everything we needed, Sherm called friends Karen and Preston and arranged for us to have supper with them at a Kozy Kitchen restaurant. The server there tagged us as Canuck and wasn't even surprised when I asked for brown gravy on french fries. The food was good and the company excellent.

After supper, we returned home where Sherm and I did the computer thing until people turned in for the night.

I mentioned to both Steve and Sherm that I think we've been on the road too long. Yesterday, as we were riding down I-5, my mind started to wander and I found myself thinking about home renovation projects. Yikes!
Posted by Jim "Skid" Robinson on 7/08/2008