We woke up in the Super 8 in Miles City, Montana about 5:00 AM. Because the continental breakfast didn't start until 6:00 AM, we took our time getting ready and checking the Email with CNN playing in the background. Finally, remembering that we weren't on the west coast any more, I flipped over to The Weather Channel. At 5:48, on the 8's, the local forecast kicked in and finished with the local weather radar. Here was a solid green line of rain approaching Miles City from the west, and it was almost here. Time to forget the bagels and dash. Proving we can hustle when we need to, by 6:10, we had packed, fueled and were heading east just in time. 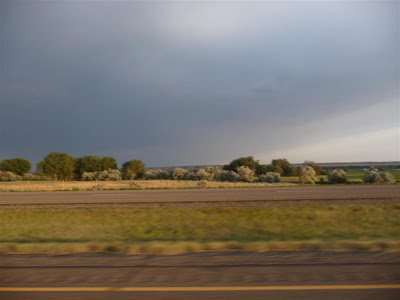 Happiness is a black cloud in your rear view mirror

Near Glendive, Montana, I recognized the spot where my 1980 Honda GL1800 Wing stripped the splines where the drive shaft met the final drive while riding home from the Rider Rally in Cody, Wyoming back in 1988.

As some of the guys went to Glendive to see if they could find someone to haul me to town, Leo and I were pushing the bike to try and get shade under a farm road overpass when a local in a pickup truck stopped. He said he had a ramp and tie-downs and asked if I wanted a lift to town. Does a VROCer argue in debate? I sure did and he got me there before the Honda dealer had gotten plates for their motorcycle trailer to come and get me.

The Honda shop went right to work and had a list of parts needed by 1:00 PM. It was Friday and they sent the list to Honda in California marked URGENT RUSH and specifying overnight delivery. It was noon in sunny California and I guess the surfer dude warehouse guy took the afternoon off because there were no parts on Saturday. My friend John stayed with me as I waited four days for the necessary parts, shipped on MONDAY, to arrive.

The senior ladies who ran the gift shop in the Best Western rented videotapes and VCR's, so I caught up on my movies. There was a pool, sauna and restaurant so we kept amused. On Tuesday, after the parts arrived and we picked up the bike, we were heading out when the ladies flagged us down. They gave us a bag of snack type goodies and a hand lettered sign that said CANADA OR BUST!

Often you can have fun even when things are going radically wrong and I believe there are more good people in the world than bad. 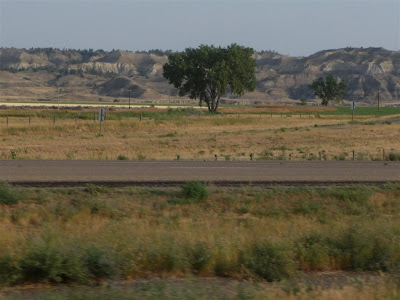 Interstate 94 is a much more entertaining highway than I-90. It has many interesting features, like this tree in front of the badlands at Theodore Roosevelt National Park in North Dakota. 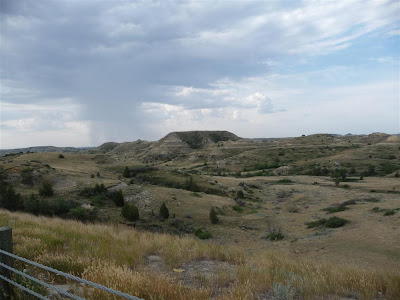 While we easily outdistanced the storm first thing in the morning, we spent a lot of time aimed at a very localized storm. Still, the GPS said we'd be turning and we finally did. It doesn't look like much in the photo, but it was much more intimidating in real life. We passed it by. 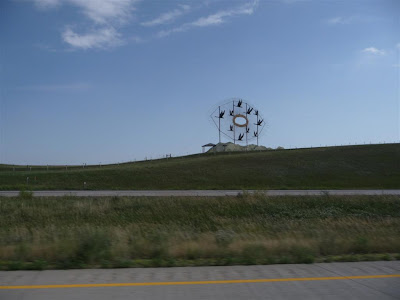 I had no idea what the Enchanted Highway was when we saw this metal sculpture along I-94 near Dickinson. Next time, we'll make time to travel the 32 miles to Regent and look at all Gary Greff's huge metal sculptures. 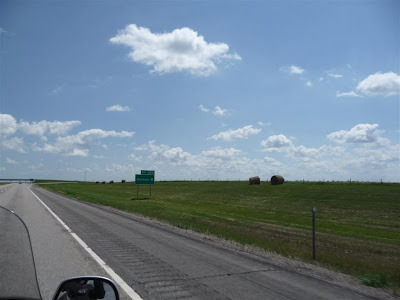 Cows can't get a square meal here
(Damn you, Slammer:-)

I had called J&R Cycle, my dealer of choice, yesterday to order tires. They had taken a long weekend off and were closed until today so I called back. Rhonda wasn't in so I gave the order to her daughter, Lorelai. Said I'd check back tomorrow. We're going to give the new Avon Cobras a try, even though the fast late wear rate of the Avon Venoms has been a concern.

You know, the prevailing winds on the great plains are usually from the west. On the westbound legs, I look forward to heading east because the wind will be at my back. Invariably, I travel east on the rare days when the east wind is blowing. Today was no exception.

In a North Dakota truck stop, we met a couple on a BMW R1150RT. They were from the Northwest Territories and were headed for Spearfish taking turns in the driver's seat. The heat (low 80's) was really bothering them. I have trouble imagining just where in the NWT you would find the 1150RT to be the bike of choice. 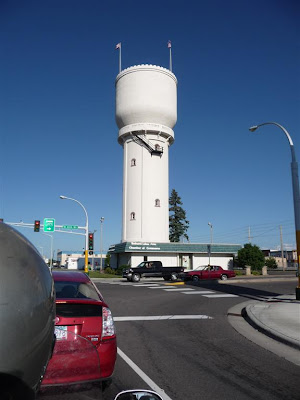 Water tower in Detroit Lakes, Minnesota
We crossed into Minnesota and left the Interstate in favour of two-lane roads. At a gas stop, I found a couple of sipes on the rear tire almost gone, but most were still clearly visible. The outcome was going to depend on how much meat the tire has on it.

Detroit Lakes was under construction. All of it. The highway, the side roads, streets, all ripped up. The new road is going to be concrete. Riding the thunk, thunk, thunk of a concrete road after a few winters (like US 41 around Green Bay) makes me wonder what they could be thinking.

Duluth was still a ways off, so I checked the GPS and found that there was a Town & Country Motel in McGregor, Minnesota. I called and reserved a room but, when we got to the small community of McGregor and saw the place, we called back and canceled. It didn't look like the kind of place we would like to stop, much less spend the night at. I called ahead and booked a room at the Travelodge in Duluth.

On the way to Duluth, Mom called and told me that our friend Mark 'Kilo' Irwin of North Carolina had suffered a fatal cardiac arrest while riding to see a friend. We were shocked and headed on towards Duluth with heavy hearts. Then, as we were approaching Duluth on I-35, she called again to say that Chuck Burt, our friend from Texas with the perennial cowboy hat, had been killed on the way home from OTI in Oregon. Unbelievable, like a bad dream. We just said goodbye to him on Saturday night.

Reeling, I got lost in Duluth despite the GPS. Not sure what I keyed in but I ended up downtown before I re-input the Travelodge and it took me back six miles. Then the Travelodge was now a Red Roof Inn so I flailed a bit more. It was a very upscale Red Roof and we got settled in but our mood was sombre. After reading the latest information on the VROC newsgroup, we went to bed early.
Posted by Jim "Skid" Robinson on 7/22/2008