I wasn't thinking too clearly this morning. We took our time getting up and leaving despite the fact that we had one more time zone to cross and over 700 miles to do on mostly two-lane roads. At breakfast, we talked to a couple of Wing trike couples from Pennsylvania. We didn't get on the road until after 8:00 AM Eastern Time.

The ride across Wisconsin and Michigan was uneventful. Traffic was light and, after a couple of gas stops,we pulled into the McDonald's near Newberry, Michigan for lunch. The tire was in the home stretch and, while looking pretty used up, looked like it would make it. I was a bit slow getting in line and found myself behind a crowd of nubile teenage girls, a basketball team from some high school. They were ordering one at a time and we took longer than planned at the stop. 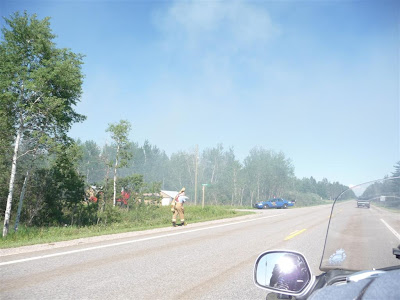 Out of Newberry, SR 28 was under a lot of construction including long one-lane stretches where we had to wait for a flagman. Then we had to contend with emergency vehicles on their way to fight the bush fire shown above.

I called Rhonda and confirmed the tire order. Added front wheel bearing to the list. Nothing wrong with the current ones, they just have almost 100K miles on them and won't last forever. I also called Mom and told her that we were running late and wouldn't be stopping on our way through town. I expect to be down in August when my brother gets home from Edmonton for his annual visit. 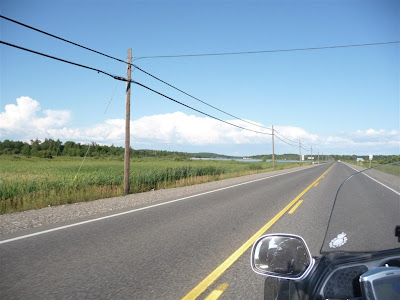 As we got closer to I-75 and the Soo, the familiar clouds over Canada came into view. This was identical to what we saw last year on a ride home from the west. We knew we would hit them before we were done the day.

The border crossing was easy. Short line, easy questions and again, no ID requested. Maybe they know us?

Near Spanish, about 70 miles from home, the clouds got ugly and we could see that we were headed into a series of heavy local showers. We suited up in a picnic area beside the Serpent River and rode through a downpour coupled with lightning and road construction through Spanish. Once out of the first storm, Sandy got a picture of this double rainbow. 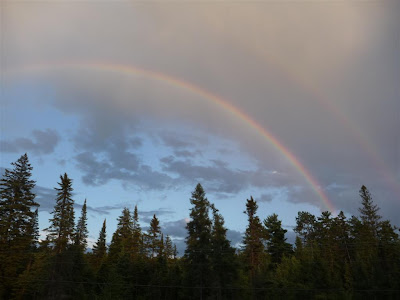 It rained off and on all the way home, the first rain we had ridden in since Wisconsin, almost six weeks ago. 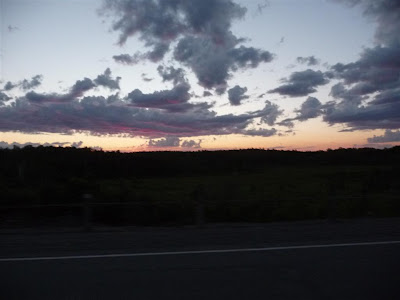 On the by-pass around Sudbury, about five miles from home, Sandy got this shot of clouds showing a magenta underside as the sun went down. We pulled into the driveway about 9:30, tire intact, tired, glad to be home but saddened by the news from yesterday. After unpacking and putting the word out that we had arrived safely, we turned in for the night in our very own bed.
Posted by Jim "Skid" Robinson on 7/23/2008