First let me say that there won't be any photos in this post. Don didn't have his camera and so I gave him my card when we got back. After review, every photo I would have published can be seen in Don's NorCal blog post on the ride. Sherm's blog also has a version of the events in reverse chronological order. I will, however, post a map of the route. 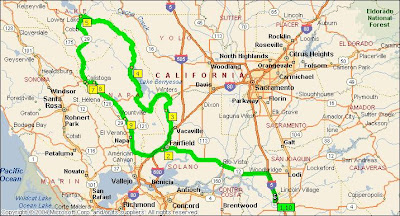 I checked my tires again before leaving. The tread depth appears to be holding up and should get us home without any trouble. Sherm lead to Flag City (the Lodi exit) where we fueled at the Flying J before Don led us across the delta on 12 and then across the top of the levy to Isleton and The River's Edge Restaurant. Sherm has good food photos, but said Don and my scrambled eggs and bacon didn't warrant a picture. I beg to differ. The scrambled eggs were done with feta cheese and scallions. The whole thing was satisfying but light, just what we needed to start the day.

The ride along the levy had been somewhat harsh. I had the rear shock set at 22, which is what I use when the bike is loaded. I backed it off to 20 for the ride to Fairfield. The stretch of SR 12 after Rio Vista is intriguing since they put posts up in the middle of the road to keep people from passing. We rode by Travis AFB and were soon pulling in to 1 Jelly Belly Lane in Fairfield, the home of the the infamous Jelly Bellies. A number of VROCers were assembled including, Jim and Cat from Alberta and California (respectively), David J who we rode with at Topaz, NiteLite, Paul (Happy Wanderer) who I've read about but never met and JazzHound (who we last saw cooking brats at Topaz). New member Barry from Elk Grove and his friend Mike from Sacramento rounded out the group. Before we set out, I dropped the rear shock to 18, which turned out to be the right place with no luggage.

Out of Fairfield, Don led us up I-80 a ways to Pleasant Valley Road, then north to SR 128. This was a nice road in good repair with a few bicycle riders and Don set a lively but reasonable pace. I was feeling good about riding and kept up with the lead three bikes. Up on 128, we caught up to a pick-up truck towing a boat that held us up in some of the corners. Eventually, we wound our way to The Corners where 128 meets SR 121. There is a store at The Corners, but it is closed. Nothing there but a large group of riders and their bikes taking a break before continuing on their way. We stopped for a smoke break and then continued up 128 to Turtle Rock at the intersection with the Knoxville-Berryessa Road. Turtle Rock has a small store/bar that had untold numbers of autographed dollar bills hanging from the ceiling.

What can I say about Knoxville-Berryessa Road? It starts out pleasant enough. Don slowed the pace down because of the possibility of police and we followed the pleasant stretch up along the very popular Lake Berryessa. People were on beaches and in boats and all seemed to be having fun. After a while, the lake ran out and so did the centre-line. Then the excellent pavement gave up and we realized we were in a place where not that many go. There were concrete creek fords, dry today but rough, and the speed was reduced. In the heat, the Wing temperature gauge started to rise and I modified my riding accordingly. My passenger started making threatening noises about our leader.

After about 30 miles of this, just as my temperature gauge was hitting the red, we came upon a centre-line. Don pulled off at the gate of a closed Homestake Gold Mine, the same company we toured last month in Lead. What are the odds of seeing another one of their mines so soon? Discussing the last stretch of road, several riders suggested that maybe we could break Don's GOOD knee. After a short time (the length of one of Don's cigarettes), we saddled up again and continued winding our way down Morgan Canyon Road into the crossroads of Lower Lake where Don stopped at the Chevron station for gas.

Now I come to the only really negative incident of the day. The Chevron pump requires a Zip Code to use the credit card at the pump. Since there are no letters on the keypad for Canadian Postal Codes, I usually send Sandy inside with the credit card to get them to turn the pump on. After waiting a bit, I went inside to see what the hold up was. It seems the cashiers here will not turn the pump on unless they run a specific amount on the card ahead of time. How am I supposed to know? This happened once before in 2005 in Scottsdale, Arizona. That time, I took my card and went elsewhere. Same this time. I won't spend money at a place where people don't understand that the word 'service' comes from 'serve'. I went up the street to the Shell and fueled up there with no trouble.

From Lower Lake to Calistoga, Don suggested we not ride as a group. Sherm and I rode down SR 29 together, with David J, Cat and Jim S. further ahead in the line of traffic. All was pretty serene until we neared Calistoga. Here we encountered a stretch of road about ten miles long that is much tighter and more challenging than The Dragon back east. It is tighter but has stretches of passing lane so you don't get trapped behind a slower vehicle for too long. I followed Sherm until I missed a pass on a car and he got away from me. He was having a blast pushing Jim S. while I, after clearing the car, wasn't able to catch up before Calistoga. Too much traffic but an excellent piece of road.

In Calistoga, we stopped at Buster's BBQ. Check the other blogs for photos. Sandy had pork while I had tri-tip beef. Most excellent. Sherm's brother-in-law, Richard, his wife Alice and Pat's 97 year old mother Pauline, who live nearby, joined us. So did Uwe and Rad, who we met at Jest's on Saturday.

After eating, people went their own way. Don led, Cat, Jim S., us and David J. back through Napa and on to Fairfield on the Silverado Trail, which wandered through endless vineyards past many wineries. In Fairfield, we split up and we followed Don back to Stockton. It was a long and tiring day, but it was a good kind of tired.
Posted by Jim "Skid" Robinson on 7/13/2008