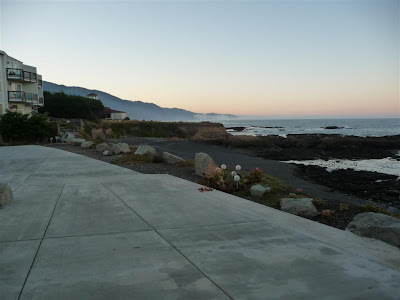 There were foggy patches up and down the coast this morning, but it was clear where we were. The temperature was in the low teens (low 50's F). The climb out of the cove was quicker than going in because, this time, I knew there was road around all the corners. We got out to Redway and connected with US 101 North for a brief period under overcast skies. Then we got off again to ride through the Avenue of the Giants. 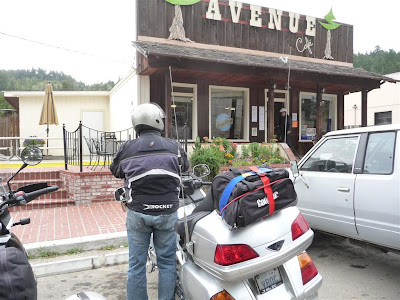 The first stop was at the Avenue Cafe in the sleepy little town of Miranda. Here, Howie is checking the door to be sure it is open before we take off the buckets. The food was pricey, but this is definitely tourist trap area and there isn't another restaurant open for quite a ways. The consolation was that the food was also excellent. 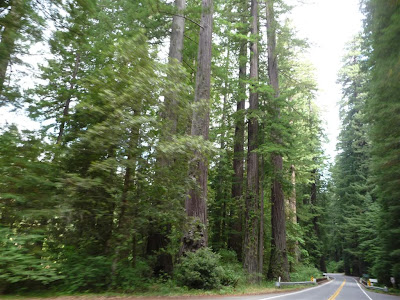 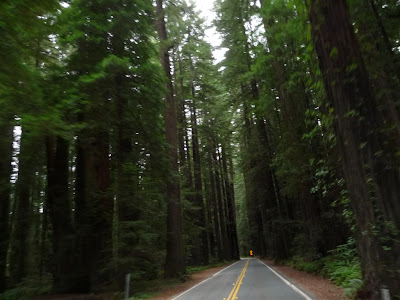 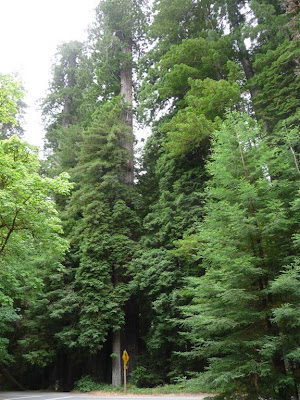 Huge redwood trees along The Avenue of the Giants 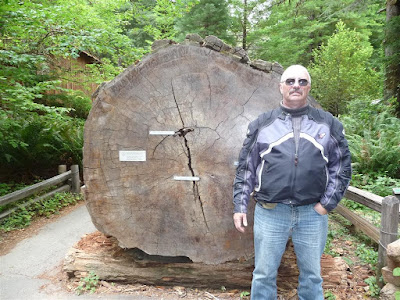 This was at The Avenue of the Giants Visitor Center. The tree was determined to be 839 years old when it fell in 1987. At its base, it was nine feet across and the whole thing was estimated to weigh 325 tons. After the Visitor Center, we cut back over to 101 to make some time. 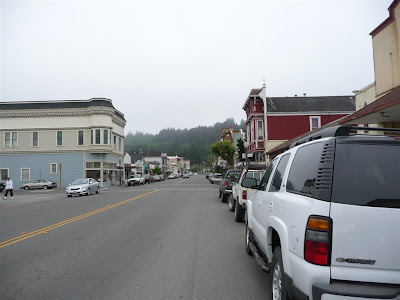 We made a detour into the quaint town of Ferndale. I kept thinking Ferndale Tonight, but I know that's wrong so don't bother telling me. This town seemed to be the stomping grounds of a number of large dogs which roamed the streets. The buildings are quite old and picturesque. What the photo doesn't show is the temperature, which was fairly cold and damp for our two Californians. Don and Howie went looking for some warmer clothes but weren't having a lot of luck. Finally, Don said that we should go ahead and they would be along when they found suitable gear. We boogied north. 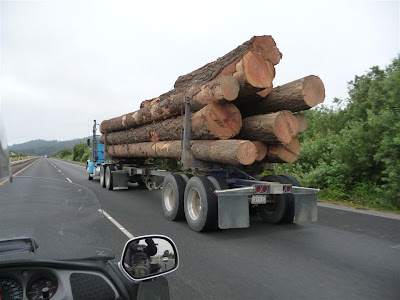 We rode north and got stopped by road construction only a few miles from the Oregon border. It took them a while because the same guy was operating the excavator, the grader and the sweeper. Strange job. Eventually, they let us through and we crossed into Oregon.

The sun finally came out again as we reached Gold Coast, but the wind also picked up quite a bit. The Wing didn't have trouble but I knew Don wasn't going to be happy on that light little BMW when he finally got there. 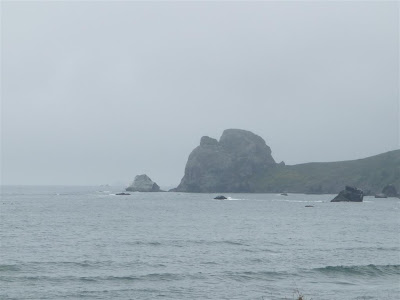 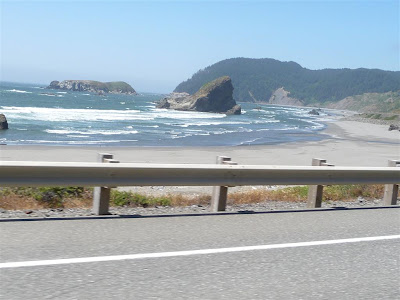 Scenes for the Oregon Coast

The Oregon coast is spectacular. Mix fine, sandy beaches with massive rock formations and you get sights that take your breath away.

The GPS had us turn onto Beaver Hill Road, which became Seven Devils Road and led right into Charleston. This is adjacent to Coos Bay and is where Captain John's Motel, headquarters of the Oregon Trails International Rally (OTI) is located. I couldn't find the motel on the GPS and when I put the address in, it didn't recognize it. It suggested two other addresses and they both brought me right to the correct place. I pulled in and saw NiteLite, Linda, Scotty, Marlene and Slots standing there in front of me. We had arrived.

We were booked into a king room on the second floor with hard-wired Internet. Guess who left his Ethernet cable at home. Luckily, John Hanneman loaned me a yellow cable that matched his GoldWing. We got unpacked and joined the OTI festivities.