Today we woke up to a travel day for the first time in a week. We were up at 5:30 AM going through the methodical ritual of getting everything packed in its place, ensuring nothing was left behind. On a positive note, after days of overcast and odd precipitation, there wasn't a cloud in the sky.

Malcolm found a box and we packed some gear we didn't need any longer to mail it home. He showed how to print the mailing label and pay for postage on line. Slick.

Just before 8:00 AM, we headed out on Highway 1. Malcolm had suggested that we go out of town and cross into the USA near Aldergrove instead of taking the Peace Arch adjacent to the city. Once across Second Narrows Bridge, we slid into the HOV lane. There weren't many eastbound but the Vancouver bound lanes were jam packed with people trying to get to work. I did note that BC drivers are worse than Torontonians when it comes to hogging the left lane on a four-lane road. Downright ignorant.

The border crossing to Lynden, Washington went without a hitch. The line was short and moved right along. The Border Agent asked the usual questions and we were on our way in less than a minute. It was still cool when we rode down SR 539 towards I-5. We stopped for gas and paid $4.45, painful but still much better than Vancouver's $1.52 / liter. SR 539 was under construction down near I-5 and they were holding traffic both ways, so I used the GPS to find some back roads around the bottleneck. We were on I-5 southbound in no time. Washington State cat's eyes (reflectors on the road) are hard to navigate through because there are several of them together in the centre line dashes.

As we approached the non-stop corridor made up of Everett, Seattle and Tacoma, we once again took advantage of the HOV lane. Most vehicles had a single occupant, so we had the diamond lane largely to ourselves. We did note that the Washington drivers were even worse than the British Columbians on hogging the left lane. They almost act proud to be obstructions.

Seattle was pretty but, strangely, they had TWO large stadiums side by side downtown. Don't let the Sudbury fathers and their legacy project dreams get wind of this. 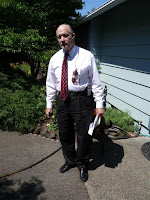 As I was approaching Tacoma, Scorp~ (Steve) called. I was just about to give him a shout. He suggested we meet at the truck stop at Exit 136. It was a Flying J and Sandy and I had soup and toast while waiting for The Arachnid~ to arrive. When he did, we were treated to the spectacle of a man in a shirt and tie. He looked like someone we knew, but the clothes were very different.

We left the bike at the Flying J and Steve took us on a tour of Tacoma in his car. The tall ships were in town and Dale Chihuly blown glass was everywhere. The Washington State History Museum will deserve a long visit the next time we're in town.

From there, Steve took us back to the bike and we followed him to his home in Olympia. He and his wife Mary have a house with a bird sanctuary area in front, a beautiful garden and two very special dogs, Ruby the hound and Rika. Mary arrived soon after we got there and we met her for the first time. It was good to see her since I've been crossing paths with her worse half for almost a decade.

For dinner, they took us to the Budd Bay Cafe, a place that is upscale without being pushy about it. Jennifer, our server, was one of the best I've seen in a long time. The dinners included soup or New England clam chowder, and entree (75% of us selected the marinated flank steak which was excellent) and dessert. A different 75% of us opted for a spectacular creme brule. Then we walked the waterfront and priced yachts while Steve abused the boat salesman with his latest joke. 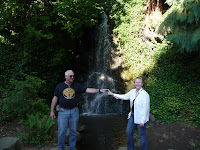 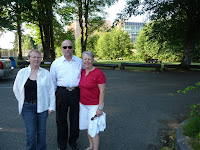 We drove around to Tumwater Falls and walked along the river where Sandy and I posed for an ET moment. Then Sandy, Steve and Mary posed in front of the now-defunct Olympia Brewery building. After that, we went back to their house and traded tales until bedtime.

Thank you, Steve and Mary, for the kind hospitality. Steve, we'll see you next week in Oregon.

Latest discovery. I have been having some trouble controlling the bike at low speed. Lurching front brake, hard to hold the clutch friction zone. While motoring down I-5, I chanced to look at the lever adjustment wheels. The brake should be on 1 but was on 2 while the clutch should be on 3 but was on 4. Damn. I don't know if I might have been fooling around with them on the way to Lead (55 MPH leads to all kinds of mischief) or if somebody else messed with them. Probably me. When I put them back, everything smoothed right out.
Posted by Jim "Skid" Robinson on 7/07/2008