It is time to head for home.

The one concern I have is that the rear tire, which I have been religiously monitoring, has gotten down to the wear bars in a few spots. This is the point at which a tire is usually thrown away, but we have 2,600 miles yet to go. I expect it will make it just fine, but I will keep a close eye on it.

We said our goodbyes to the few people who were up. The last two we saw were Malachi and Yvette. We'll see you again before too long, Joe. Then we rode into town and had breakfast with Sherm and Pat at a place called Dishners. Thanks for breakfast. Parting is such sweet sorrow but we'll see Sherm in Arkansas in September.

It was 10C when we rolled out northbound on US 101. We rode up to Florence and then cut over to Eugene and I-5. Some pick-up truck driver in Eugene got upset at me. Honked his horn and gave me the finger. I guess I did something wrong but have no idea what. Then I leaned on my own horn when a van moved into my lane without signaling. Thanks, Honda, for making a horn that scared the guy.

We rode up I-5 to Portland and caught I-84 east along the Columbia River Gorge. 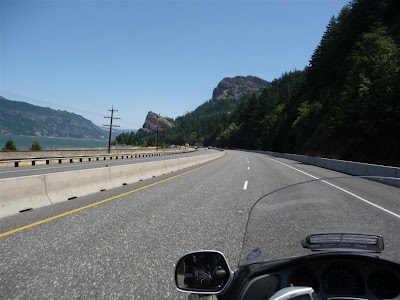 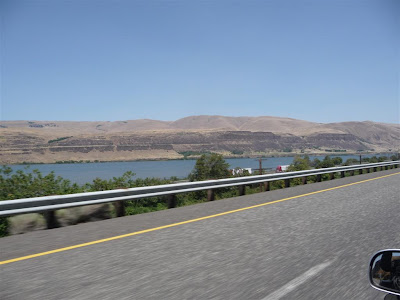 Looking across at Washington 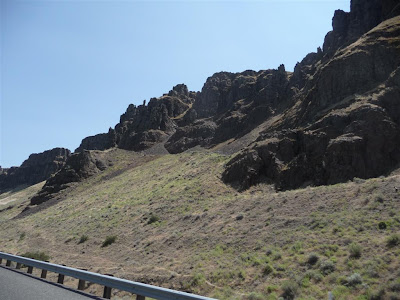 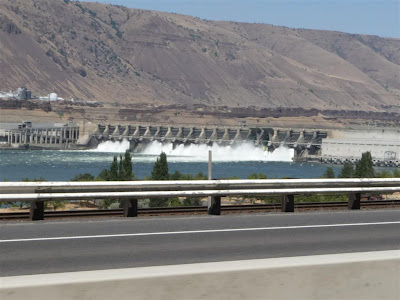 John Day Dam on the Columbia

We stopped at Biggs Junction where they have a Mickey D's in a Pilot Truck Stop. We stayed here back in '04 in the Travelodge Hotel. Today, there were no (zero, none, nada) parking spaces in the Pilot. Crazy. We fueled at the Chevron and took off our cold weather gear. There was a BMW with Quebec plates. The couple, from Quebec City, had shipped the bike to BC since they only had two weeks to ride. Good plan. Skipping food, we continued on.

In the gorge, we saw a disturbing sight. There was a bike on the other side with a trailer. It looked like the riders were picking up the detached top half of the trailer, which looked like it could have been a Lees-ure Lite. It appears that someone didn't have the luck we did back in '05. Unfortunately, there was no way we could get across to help.

Eventually, we turned onto I-82 north and crossed into Washington State. We hit the max temperature about here at 36C. We made a food stop at Mickey D's in Kennewick and then I called the Super 8 near Spokane and reserved a room. We got in about 6:30 after covering 573 miles (according to the GPS). The rear tire looks about the same as it did this morning. I am cautiously optimistic.

Now the blogs are up to date. We will ride early tomorrow since we lose an hour to Time Zone and I'm hoping to cover some serious miles.
Posted by Jim "Skid" Robinson on 7/20/2008