Sandy wasn't sure what day it was when we got up this morning. We left in Don's car about 7:30 and drove 45 miles up I-5 into Sacramento for breakfast. Traffic was light. On the way, we were talking about TV series that might have been set in Sacramento. I was sure there was one and just checked IMDB. Eight Is Enough, not that it matters to anyone but me. 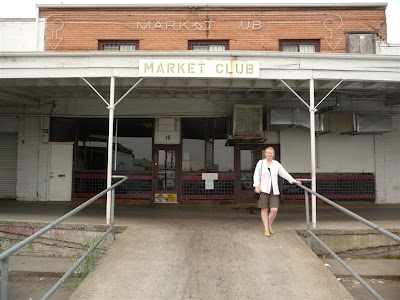 The Market Club Cafe
Arriving in Sacramento, Don wheeled us down a side street and into what appeared to be a run-down part of a wholesale produce market. We wondered just what kind of breakfast we were going to be getting, but we need not have worried. The Market Club Cafe is simple with no frills but the service is good and the food is excellent (if a bit unorthodox for our Canuck tastes). Customers appeared to be mostly local regulars and market workers. The top special was baloney and eggs. Don had Spam, eggs and rice. I had linguica (Portuguese sausage), eggs and hash browns. Sandy wasn't at all adventurous and settled for bacon, eggs and hash browns. It was very tasty and we called Sherm while eating because he knows and likes this place. I'd recommend it to anyone in the Sacramento area. 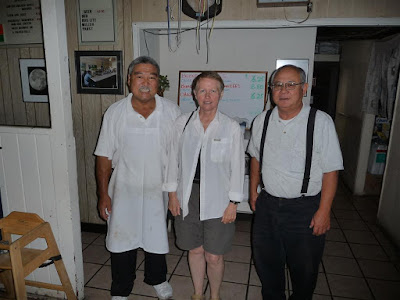 Jim, owner and chef of the Market Club Cafe, with Sandy and Don
After breakfast, the owner/chef came out to say hello to Don, an obvious regular. We complimented him on the food and conveyed greetings from Sherm, He Who Photographs Food. There was a photo on the wall of the #3 Goodwrench car along with the 8 and 15 dated February 18, 2001. It seems Jim was a fellow Earnhardt fan and we talked a bit about that fateful day.

On the way back, Don pointed out a flock of sheep held alongside the road in a temporary corral. He said they put the sheep out to deal with the roadside vegetation and just keep moving them down the road as they eat everything.

When we got back, Don went out for a haircut, Sandy took a nap and I caught up several days of blogs. We spent the first part of the afternoon doing our various chores and Sandy de-slimed her cool vest. Don figures the slime was residue from her following the directions and rinsing the vest in detergent when it was new.

About 3:30, we piled into the car and drove over to Don's Mom's house. Leona lives in her beautiful house with her daughter, Laura. Regular blog readers will recall that Don's father, Frank, passed away last year but Leona is still a ball of fire. The plan was to take us to the L&L Hawaiian Barbeque for supper. This is sort of fast food but more. I had fried shrimp with brown rice and macaroni salad while Sandy had a small order of sesame chicken and Don had a beef dish. Leona got salmon and we took a low carb selection back to the house after for Laura. 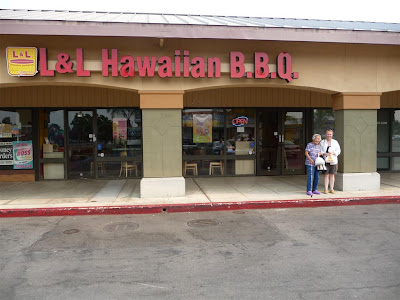 Leona and Sandy in front of the L&L Hawaiian Barbeque 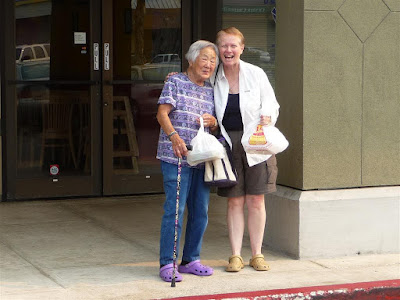 The ladies share a joke
After supper, we went back to Leona's house for a while. She gave Sandy a clever T-bag holder in her favourite colour, purple, and some unique dishcloths. We had to head back to Don's before too long, but we will be seeing Leona again on Tuesday for lunch.

At the house, we prepared a few things for our car trip to Jest's house in Saratoga (near San Jose) for the pool party tomorrow. Then we lazed around (except for Don, who ran several more permutations of our Coos Bay route) until bedtime.
Posted by Jim "Skid" Robinson on 7/11/2008