Planning an early start, we were up at 5:30 getting gear stowed. Sherm had toast, coffee and a delicious pastry laid out for us for breakfast. Then, after making a comment about how nice it was to have a bike that started any time, we hit the jinx. First, my microphone wouldn't work. After trying all the exterior plugs, I delved into a hidden plug under the helmet lining and fixed the problem. Unfortunately, somewhere during this time, it appears that I had left the ignition on with those two headlight beams drawing power. The battery didn't have enough juice to start the bike. Sherm brought out a spare battery and it had enough power to get me going. We were a little late getting the 'trouble-free' bike on the road.

Thanks, Sherm and Pat, for having us as guests. And Sherm, I should have paid more attention to your advice about not getting off US 101 while leaving town. I took the scenic route.

So by 7:30 we were rolling south on Highway 101. It was cool and breezy. About the time we swung onto SR 42 to take us inland to I-5, the temperature gauge was reading 12C. The ride over 42 was fun, sweeping and climbing with almost no traffic. At 9:00, we were swinging up the ramp onto I-5 South. We stopped in Medford at what was supposed to be a McDonald's but we couldn't find it. Instead, we just fueled and took off our cool weather gear since it was now in the high 20's C. Then, cursing Medford's convoluted service road, we managed to find I-5 and continue south.

The secenery as you enter California is rugged. Dry brown hills dotted with trees. Hills so steep trucks also use the paved shoulder to get out of the way as they climb at almost a walking pace. And then you see Mt. Shasta in the distance. 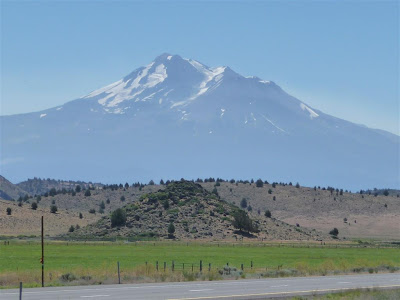 Mt. Shasta from I-5
According to releases earlier this week, the scientists say that Shasta is the one place in North America where the glaciers are actually growing.

One thing that was immediately apparent as the heat started to push 38C (100F) was the tinder dry conditions. Along the edge of Lake Shasta, Sandy got a picture of the first of many fires we would see burning. 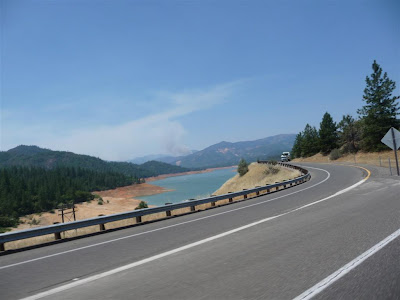 Fire over Lake Shasta
The temperature continued to climb as we pushed south. I watched the ambient temp display on the Wing go to 40C (104F) and then keep on until it topped out at 43C (109F) near Redding. We had stopped to put on our cool vests for the first time in a rest area. These are vests you soak in water. They absorb great quantities and then cool you as the water evaporates while you ride. Under the mash jackets they were messy but I wouldn't have ridden without them. 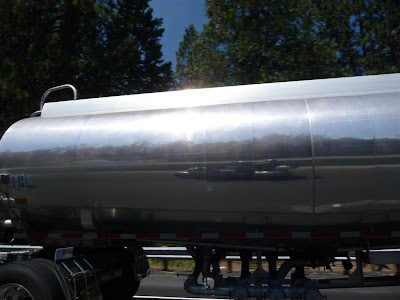 GoldWing Reflections On A Tank Truck
The intense heat was compounded by a haze of smoke. The Wing coolant temp gauge We stopped in Corning for gas and Sandy almost passed out after climbing off the bike. Lemonade and Mickey D's fries (to replenish salt loss) were the prescription and we soaked the cool vests again. Strangely, as we continued south and caught a few places where the temperature was down to around 100F, it felt refreshingly cool to us. 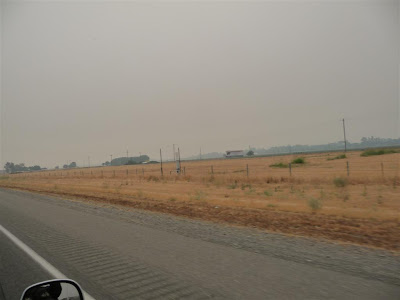 Fire Smoke on I-5 near Williams
We couldn't take I-5 all the way to Stockton because of construction on the southbound lanes in Sacramento. Instead, we took I-505 south, a cutoff road for San Francisco Bay area people to get to and from the north. Before we got down to 80, we took Midway Road east and then went south on SR 113 before turning on SR 12 to Rio Vista and Lodi. Traffic was light until we reached Rio Vista, and we came to a dead stop at the far side of Brannan Isle while the bridge swung open to let a tall masted boat pass through. We sat here for about 15 minutes but, since the temperature was just barely above 100F, we didn't suffer too much.

Bridge closed, we continued on to I-5 and followed it south to Stockton where Don recorded our arrival condition for posterity. 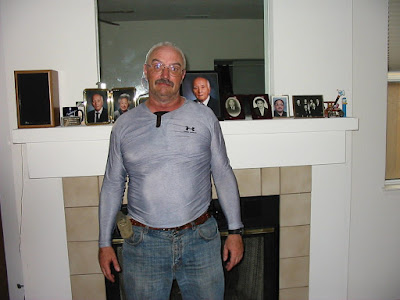 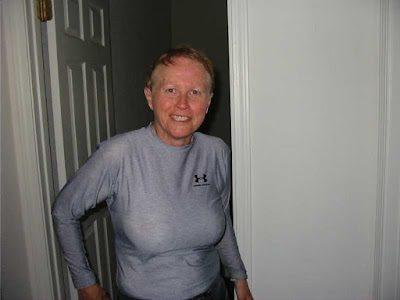 Skid & Sandy arriving in Stockton after 109F on I-5
We may look a little rough, but it was that kind of a day. The shirts are the UnderArmour ones we bought at Cabela's in Prairie Du Chien. Don figured we wouldn't be up for a hot meal after the kind of day we had so he had some flatbread loaves from the River's Edge in Isleton and an assortment of deli meats and cheeses along with some potato salad. The bread was amazing and the whole meal hit the spot perfectly.

Sandy turned in early while Don and I sat up and watched a DVD of Wild Hogs. Then it was off to bed for both of us.
Posted by Jim "Skid" Robinson on 7/10/2008