Finding that we would be in the neighborhood, a well known California VROCer named Rick (aka Jest) invited the NorCal members and pretty much anyone else who could make it to his home for a party today so we could meet them. Rick lives in Saratoga, down below San Jose, so we had a ways to go. Don planned an 8:30 departure and we would be traveling by car. 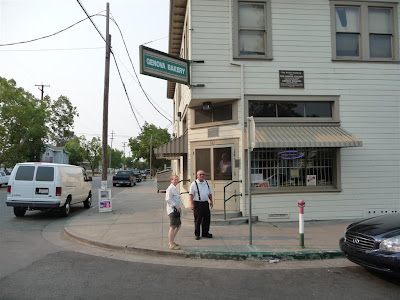 The first stop, on the other side of the proverbial Stockton tracks was the Genova Bakery. One street over, we saw the Stockton PD handcuffing a kid whose car they had stopped, but the bakery is an oasis of everything that is right in the middle of a whole lot that is not. Right after I took this picture, wearing my Red Rock Rally pseudo tie-dyed shirt, many pocketed shorts and Crocks, a lady in the bakery greeted me with "Look, tourists". That hurt:-) She was the backup bookkeeping trainee and we had a nice chat while Don was getting bread.

We left Stockton on I-5 and took I-205 and I-680 to Fremont. Along the way, we went by Altamont with the many windmills and saw working cattle ranches juxtaposed with Audi dealers. Such is California. The smoke was a constant haze. 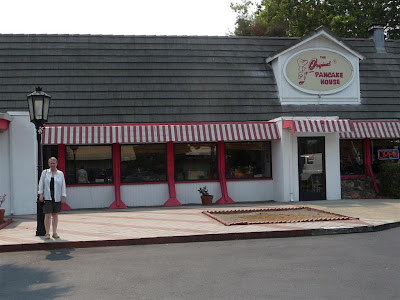 In Fremont, we stopped for breakfast at The Original Pancake House. I don't think this specific one is the actual 'original', but it was very good. The pancakes were light and fluffy and firemen were eating here. I'd recommend it.

On the way to Rick's we went through the very 'just-so' downtown area of Saratoga so Don could check the location of the Hakone Buddhist Gardens for future reference. We found it at the top of a steep hill. There were many cars in the lot but they all had California plates so this looks like it is special to the locals but isn't publicized to the tourists.

I would not have found Rick's house even with my GPS. When you get to the address in the hills, there is a little non-descript lane that will take you back to the house if you think to follow it. It is a beautiful place, the kind I told Rick that we think is part of the California fantasy.

David (Redbeard), Howard (NiteLite) and, of course, Rick were there when we arrived, as was Rick's daughter Lauren. Cranky came in on his bicycle soon after and KC paid a visit although he was technically working. Later, Steelman and his son Brandon arrived. So did Uwe and Rad. Uwe is still recovering from his adventure on the NorCal ride at the end of May when he found that Nomads can't fly. Rick's wife Colleen and son got back around this time and they put in an order for pizza. 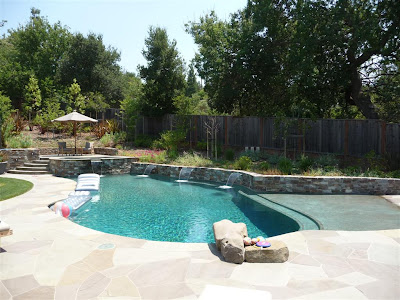 Rick's pool was wonderful. It even has a diving rock on this end. Howard, Rick and I were the only adults to get wet although Lauren and Brandon made good use of the water. The temperature was about the same as the air and Howard commented that some moments were so good that they just should not end. I had to agree. Sherm, comedian that he is, wasn't there but did post this tidbit from Don's camera. We ended up getting out of the water just in time for the pizza delivery. 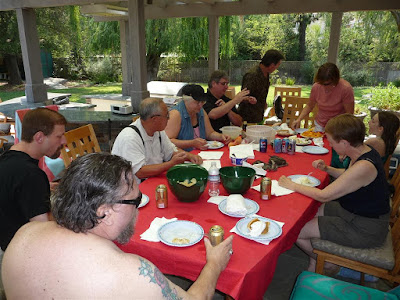 From the foreground, clockwise, Howard, Steelman, VSP, Rad, Uwe, Rick, Colleen, Lauren and Sandy
About 5:00, we packed up to leave. Many thanks to Rick and Colleen for opening their home so graciously to the wanderers. This gave us a chance to see and meet some people we otherwise wouldn't have on this trip.

For more pictures, you can look at Don's blog of the gathering.

The return home was uneventful. When we got back to Don's, Sherm was there watching the NASCAR race. Our drivers didn't do very well and our standings in the VROC NASCAR Fantasy League took major hits. With tears in our eyes, we turned in for the night.
Posted by Jim "Skid" Robinson on 7/12/2008