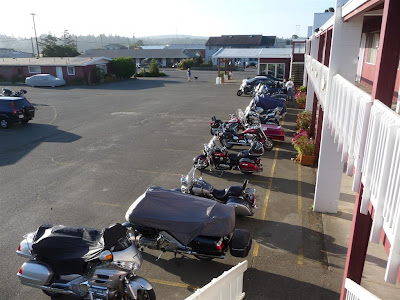 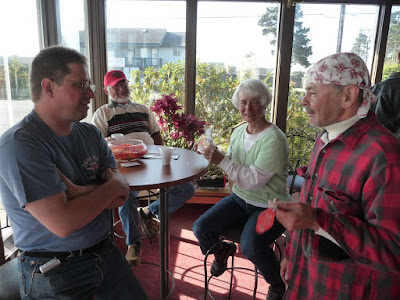 In the lobby, Malachi talks to Scotty while Slammer and Marlene look on
Sherm's Ride without Sherm

I woke up early this morning and got on line. Since I had ridden Sherm's Ride yesterday with the GPS on, I was sure there was a way to get the GPS to tell me where I had been. Once I found the right site (www.zumoforums.com), I found the answer. The ride from here all the way to the Umpqua Lighthouse was saved as one track and the unit easily (once you know how) converted it to a route that could be followed again.

Word came down that Sherm had, in fact, been diagnosed with three kidney stones. Efforts to go after them had not been successful and he was pretty heavily medicated. Brian, the other casualty, had been transferred to Portland. The CT scan showed no brain swelling but he wasn't conscious yet.

We set out on time with less bikes than we had yesterday but more than I had expected. The only change from yesterday's ride was a short detour at Bandon led by White Eagle/Peabody/Mark to see the Bandon shore. 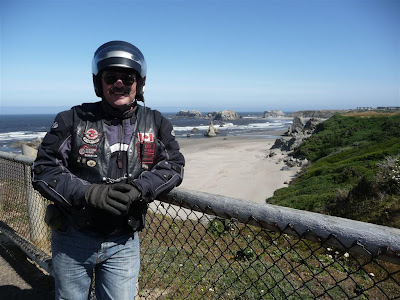 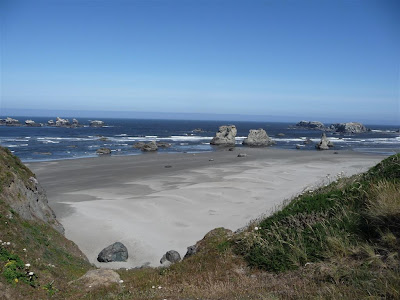 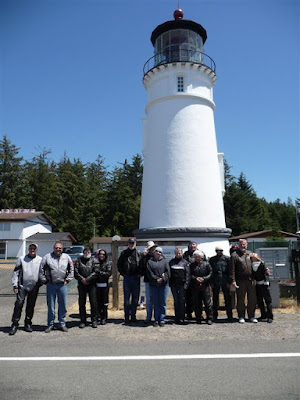 Group photo at the Umpqua Lighthouse

Some riders returned to Charleston from the lighthouse. Sandy caught a ride back with Nickels. I took the rest on to SCP in Reedsport. From there, I appointed someone to lead the elk viewers on up the road and I took the remainder back to Charleston. I pulled into the motel lot with one bike, Valdez, behind me. It was a pleasure riding with you, Valdez.

Notwithstanding the VROC server, the Darkside has come to refer to motorcyclists who use a car tire on the rear of their bikes. Biglefti, aka Lanny, has done just this with his Wing but is using a taller tire meant for a Dodge Sprinter van. I took it for a spin. While a little different from a bike tire, it does work. I took a series of 30 MPH corners at 45 and, other than a slight tendency to centre itself upright, it felt not bad. Now consider $115 and the possibility of 50K miles.

There are many who vehemently criticize this practice but I am no longer one of them.

Didsbury Dave (so named because he hails from Didsbury, Alberta) and his lady Romy (aka Pebbles) decided that they wanted to share their wedding vows at OTI. They spent some time getting everything set up. Romy, originally from South Africa, has just recently become a Canadian citizen.

At 6:00 PM, VROCers saddled up and followed the groom to Cape Arago. There, on a scenic bluff overlooking the Pacific Ocean, the deed was done. 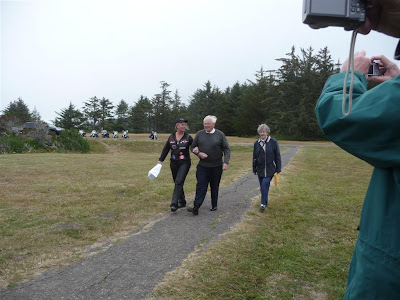 Dave's father and step-mother escort Romy down the 'aisle' 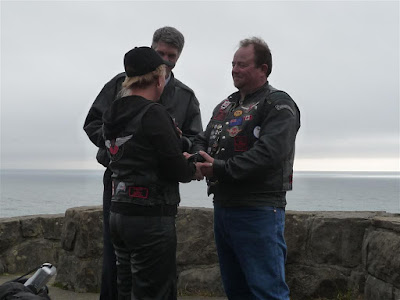 The presentation of the CLAP
The minister rattled some of the attendees by stating that, instead of a ring, the bride was going to give the groom the CLAP. Actually, it was some CLAP (Chrome, Leather and Performance) in the form of a Zumo GPS. 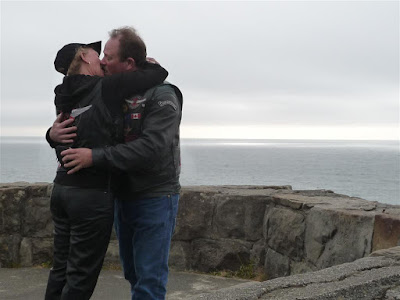 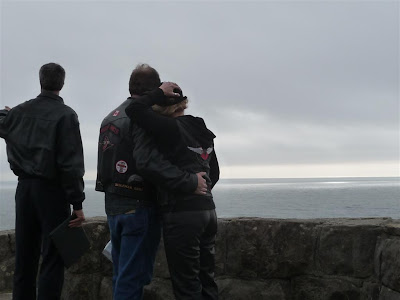 The sun breaks through on the horizon
An auspicious omen 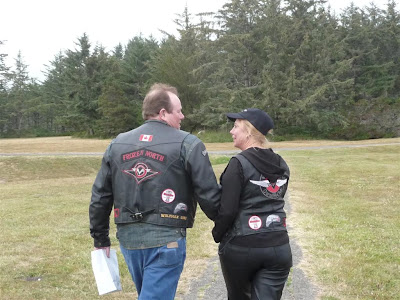 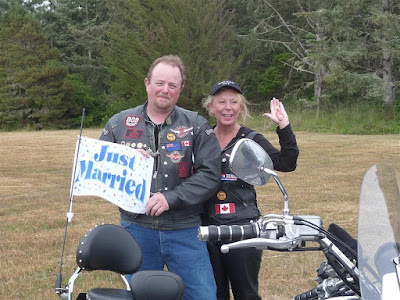 Congratulations, Dave and Romy. May you be blessed with many long and happy years together.

Back At The Beach House

It was raffle time. Instead of calling numbers, we had all written our name on tickets. You had to be present to win, so I had Jamey T's tickets, too. Jamey won some nice vest extender chains. I won a nifty LED flashlight. Then the wedding cake arrived and we proceeded through the receiving line and got cake before drawing the 50/50. I can't remember who won but it wasn't me.

Since we were out in the morning, Sandy and I said our goodbyes and headed to bed soon after the draw was over.

It has been a fine rally. Thanks to Lisa and all those who assisted her. You all did a fine job and should be very proud of yourselves. Our special thanks to Sherm and Pat for the extra touches.
Posted by Jim "Skid" Robinson on 7/19/2008