We woke up in Baldwinsville to a clear, sunny sky. The Weather Channel showed active weather throughout much of the US, so we were very lucky. Checking the VROC newsgroup showed many people arriving home safely, although Badluck and Jason, who left Richmond together, had separate incidents with gravel that caused them to go down. Luckily, damages and injuries were minor.

I did some work on the blogs and then we hit the road about 9:15. We didn't get far as we took SR 31 east across Syracuse and found a huge big box area. We had breakfast at McDonald's and then went to WalMart for some electrical tape, duct tape and Crazy Glue for the helmet. We needed aa second camera and, after spending some time looking for something that didn't have too many buttons, we settled on a Kodak V1073 with a touchscreen. The pricing in the computer was wrong but, after getting that sorted out, we got on the road again. The new camera would have to wait because it needed a full charge on the internal lithium ion battery.

SR 31 took us over to Rome NY where we accidentally went right through town due to a road reroute that wasn't in the GPS. Rome is a pretty little town on the Erie canal with historical Fort Stanwix right in the middle of it. 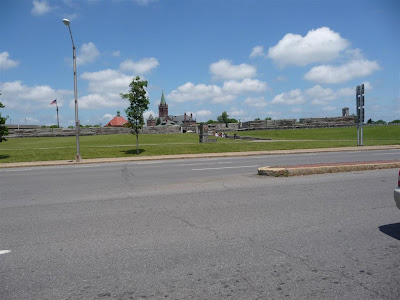 Fort Stanwix
We rode along the south side of Lake Oneida which made me think of the Oneida Community, one of the original alternative lifestyle places in the US back in the mid to late 1800's. Then wwe took Old Floyd Road to the town of Floyd, making me think of infamous VROCer Vonster, aka, WingedNut. 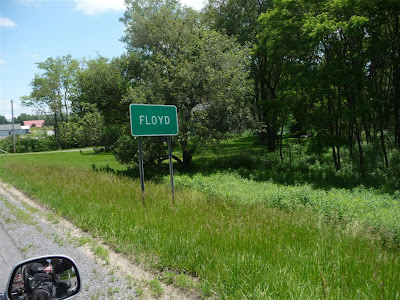 Entering the Town of Floyd
Typically, the GPS took us on some back roads from SR 395 back to SR 395. Then we wandered up past the Hinckley Reservoir to a place called 96 corners. I only saw one corner and couldn't find out where the name came from. 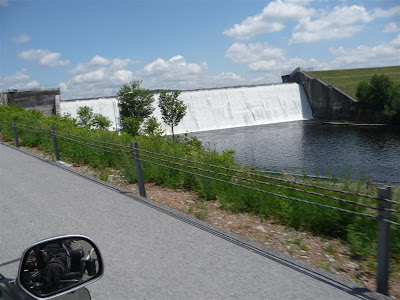 Hinckley Reservoir overflow
Entering Adirondack Park, we could smell the pines. The road swept back and forth in the 20C weather. I was comfortable in mesh but Sandy put her sweater on the cut the chill she felt. The road was a great ride except for quite a few slippery tar snakes. No big problem. At one point a sign indicated we would have 8 miles of rough road, but it was better than many of the roads back home. 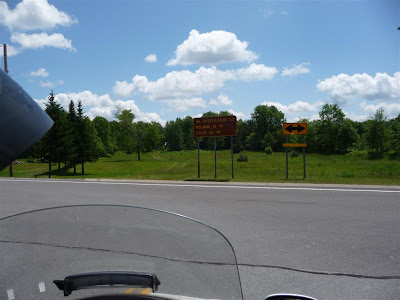 Poland sign for Tom on SR 8
Although I planned to head over to Lake george, blacl clouds were building in that direction so we cut south on SR 30. 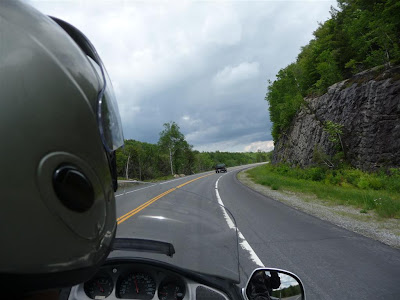 Dark clouds on the horizon
In the town of Speculator, we saw Welcome Bikers signs left over from Americade. I was feeling tired so we stopped at the King of the Frosties Restaurant. Unfortunately, they close at 2:00 PM and it was 1:58. The girl behind the counter let me have what was left in the coffeepot for free. 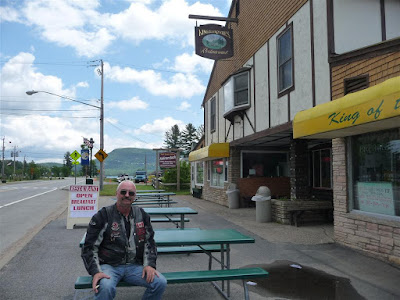 King of the Frosties restaurant
The modified route too us south and then east. At the 30 & 29 intersection, we stopped and split a Subway meal deal. Then it was on the Saratoga Springs, where I forgot to clear the via point in the GPS and was rewarded with a tour of downtown as it took us past city hall. Saratoga Springs has horses in the same way that Ludlow Vermont has llamas and Custer South Dakota has buffalos. 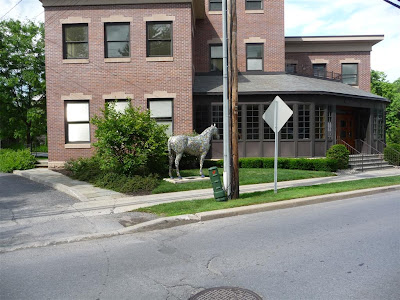 One of the Saratoga Springs horses 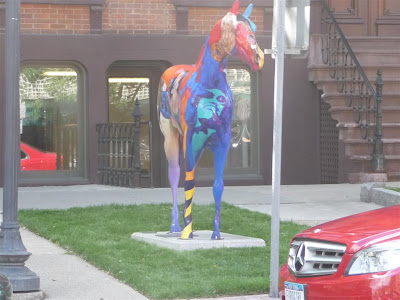 Another one
From here, we took some dandy back roads towards Bennington, Vermont. The traffic was light and we enjoyed the countryside. From a plaque we found this was Grandma Moses country. Her work was first discovered in a Hoosick drug store in 1938. We also saw a herd of rare
Belted Galloway cows and went through the Buskirk covered bridge. 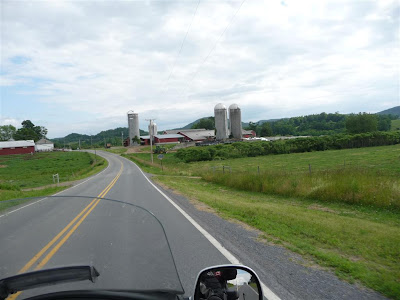 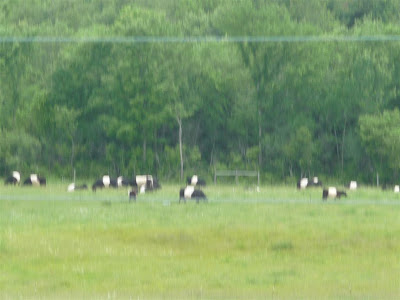 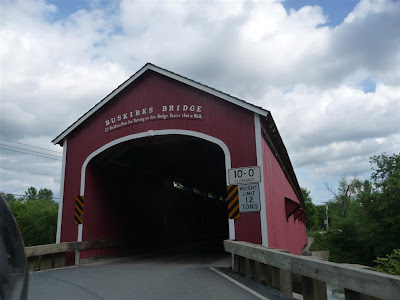 Buskirk Covered Bridge
(note speed limit sign)
We entered the serene town of Bennington Vermont and decided to splurge at another Hampton Inn. This one was extremely nice except that the hot tub was down for the night. We walked over to a Hannaford's groceries store and got some deli chicken, potato salad and drinks to take back to the room. I did some more blog and photo work but am still running about four days behind real time. 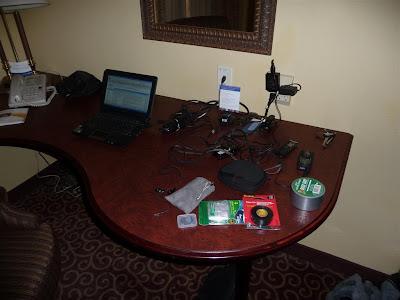 Blogger Central
We're only three hours from Epsom. Forecast for tomorrow is sunny and warm. The weekend in Epsom is calling for 40% chance of rain and temperatures around 70 each day. Could be worse.