Wrong Turn (Jim) is a VROC friend who lives in Fayetteville, West (By God) Virginia. He's been getting around to far flung VROC events for a few years and now has several bikes including a Nomad and a 2005 GoldWing in silver, just like ours.

Jim told me in Kentucky that he was considering a ride around the north side of Lake Superior after visiting a friend in Wisconsin. I told him that if it looked like he was coming through Sudbury to let us know and that he has a place to stay here. Thursday night, he called from Thunder Bay where he was staying with Borys after a ride up from Duluth. Friday, he would be heading across the top of Gitche Gumee and we'd see him on Saturday.

We didn't hear from Jim last night but I figured it was just some glitch. This morning, the Freedom Riders were heading south on a ride to Parry Sound and across 124 to visit the Screaming Heads in Burks Falls. We rode down to see them off at the Tim's in the south end and decided to ride along a ways.

About 20 miles south of town, the cell phone rang and the Caller ID said it was Jim. I answered but the call cut off. I looked to see what I could have done wrong. Nothing seemed apparent so I left the group in Estaire and tried Jim a few times before getting through. His cell phone battery died the day before and he had little signal now but we learned he was in Pancake Bay (north of Sault Ste. Marie). I told him we would meet him at the Tim's in Blind River, about half way between Sudbury and the Soo.

We got to Tim's first. Not too long thereafter, in rolled Jim on his Wing towing his Kwik-Kamp trailer. I told him he was in the place Neil Young sang about in Long May You Run ("well it was back in Blind River, in 1962, when I last saw you alive"). We had a coffee and then headed east on Highway 17. 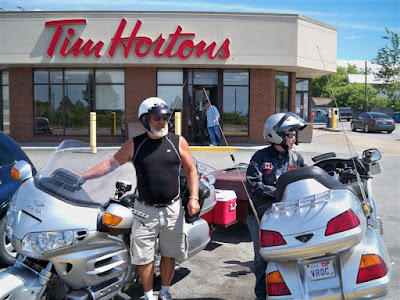 We stopped at the Serpent River picnic area to look at the white water and again in Spanish for gas. Coming into Sudbury, I took him up to the Big Nickel/Dynamic Earth site where much of Sudbury as well as the mining/milling/smelting and refining operations at Vale INCO are visible. It gives a good look at the unique Sudbury landscapes. 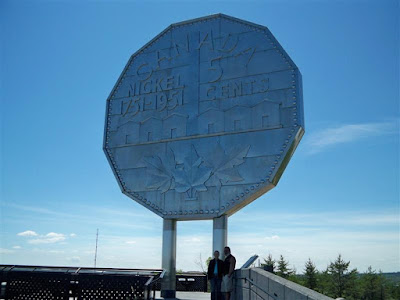 The Big Nickel
From there, we rode to the house and got Jim settled in his room. Then we took the van and took a local tour starting with Bell Park, the Boardwalk, Ramsey Lake and the Miners' Memorial. This is one of the prettier places in the City. 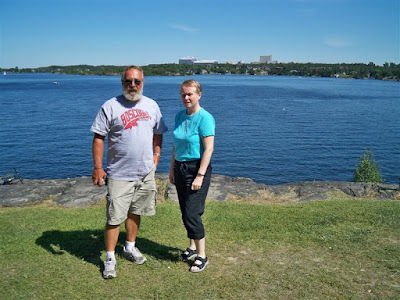 Jim & Sandy at Bell Park with Ramsey Lake in the background
From the park, we took a drive out by Laurentian University and the upscale houses out on the point and South Bay. Then it was on through New Sudbury before arriving at Montana's Restaurant at 6:00 PM to meet Biker, Cheryl and Normie for supper. The special was a beef/pork rib combo that some had. I had a steak and Sandy had a rack of back ribs. Norm was the only one with room for dessert. He couldn't finish it. 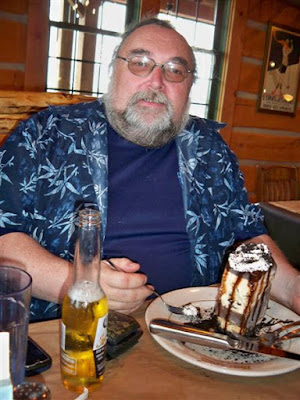 Normie making a valiant attempt at dessert
After supper, we returned home and visited until bedtime.
Posted by Jim "Skid" Robinson on 6/27/2009