On The Road Again

At 7:00, there was a very fine rain falling. The weather man said would last until 2:00 PM but the radar showed we were on the back end of it so I hoped it would end sooner than that. As usual, I packed at the last minute and we got everything fit into the bags and the bags fit into the bike by 9:00. The radar showed the rain ending, but it was still falling too lightly to be picked up by the radar beam. In the meantime, I spent some time on the phone with Bell figuring out how to call forward the home phone to the cell phone.

Just after 10:00 AM, I gave up on the rain ending completely and we headed out. I stopped for gas and realized I had left the new voice recorder hanging on a hook in the house. It was back home for a moment and then we left for real.

Sixty miles south of town, the rain eased and the roads dried. This felt like a warm front rain so we couldn't figure out why the temperature was only 12C. A few miles after the rain ended, the temperature dropped a few degrees and we rode into Parry Sound in light fog. During our lunch stop at the Nobel Timmie's, Sandy kept her hands wrapped around my hot coffee cup until it was time to go again. Setting out from there, we took off the rain jackets and gloves but kept the pants on just in case.

Near Moonstone, about 17o miles into the trip, we encountered our first other motorcycles on the road. Lots of people not riding today. Coming into Barrie, we saw a flock of Canada geese headed south. Perhaps they were tired of waiting for summer? The Petrocan station at 400 and 89 had the pumps blocked off so I had to do a reroute and go into Cookstown for fuel.

From Cookstown we took the regular route to Alliston, down the Tottenham Road and across through the Hockley Valley. A nice ride with virtually no traffic. I contemplated how dirty the bike was (even the half I cleaned before leaving) and considered the futility of washing a long haul machine.

We arrived at Taylor's Bridal in Elmira in time for Sandy to pay for the second half of her mother-of-the-bride gown. It looks spectacular. While there, I got a call from Heather telling us Sundial, out of NYC, had crashed on his way to Kentucky. No details except to say that the prognosis was good. Warren was one of the people I was really looking forward to meeting for the first time.

We rode on to Waterloo and picked up the two new face shields at KW Honda. Nice to have, but they cost $74 for the pair. Then it was in to Kim and Mike's in Cambridge to see granddaughter Jolene. She was happy to see Grandma but Grandpa caused the lower lip to quiver for a bit. 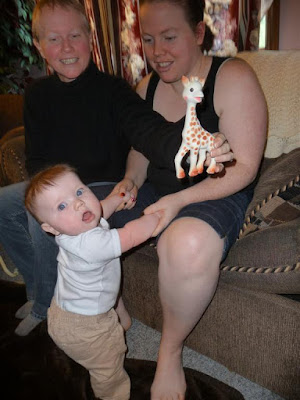 Jolene standing on her own two feet
I spent time installing the new shields and we put lines of black electrical tape across the top and bottom to act as sun shades. Thanks, Kim & Mike, for the pizza supper, the stuffed crust was excellent. Mike also ripped me some tunes off Kristofferson's new album. Then we headed over to Heather & Tom's for the night. I don't want this to get out but I did wipe the bike down before covering it for the night.

It's been a slow start to the season but it feels really good to be going somewhere again.
Posted by Jim "Skid" Robinson on 6/09/2009