The weather wasn't the best this morning. Sandy caught the sky while out on her morning walk. 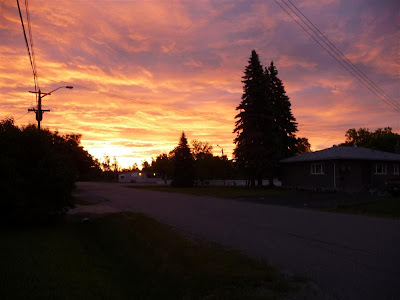 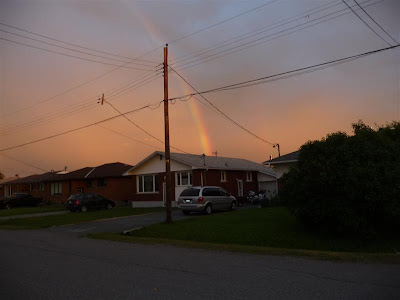 The rainbow looks like it is coming down into our house (pot of gold?) and the rain hasn't even started yet.

The rain started soon after and we knew that it wouldn't be a bike day. We took the van to Gonga's Grill for breakfast and then came home where we passed the time for a bit. After talking country/mountain music, we watched the movie Songcatcher. Then we took a drive in the van to see Onaping Falls from the A.Y. Jackson Lookout. This was the place Biker, Sandy and I spread Kilo's ashes last fall. We also walked around the little park checking out the mineral and equipment exhibits. 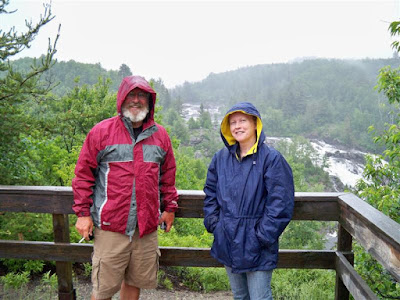 Jim & Sandy brave the drizzle at Onaping Falls
From Onaping Falls, we toured Levack before heading back to town. Jim was curious about WalMart so we took him into ours where he learned that Canadian and US WalMarts are not equal. We have a long way to go up here. Then it was over to Canadian Tire to show him a Canuck tradition and, finally, into our Real Canadian Super Store, the local grocery place we use. 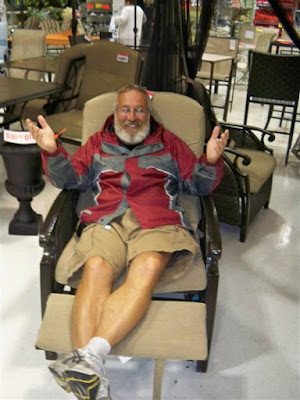 Jim checks out lawn recliners at Canadian Tire
We picked up supper to go at the Silver Bullet, an airstream trailer/food stand in the Flour Mill area. We ordered three small poutines, burgers for Jim and I and a couple of chicken fingers for Sandy. They screwed up and we ended up with one small poutine plus two LARGE ones. At home, we tucked in the best we could, but there was just too much. It was Jim's first encounter with poutine and it nearly did him in. I love the burgers but will probably pass on the poutine next time unless someone will share a small one with me.

After supper I skipped through the NASCAR race coverage from (of all places) New Hampshire. I did OK but it could have been better. The end of the race was rained out but, after our experience there last weekend, I was not surprised at all.

Then we watched an hour of Gene Simmons Family Jewels before Sandy turned in. Jim and I talked a bunch more before hitting our respective bunks.
Posted by Jim "Skid" Robinson on 6/28/2009