(That's Lima as in beans, not Peru)

Heather was off to the chiropractor first thing this morning. I see online that Biker (headed for WWR by a different route) is using a new feature on the Find Me SPOT device that tracks his progress with regular breadcrumbs. What will they think of next?

I also saw on the newsgroup that Sherm, trying to catch up to Malachi and Yvette, got a hefty speeding ticket from an Oklahoma state trooper. Hefty but generously marked down because he was clocked at 105 MPH in a construction zone. The trooper knocked it down to 90 and didn't hit him with the double penalty. In Ontario, he'd be walking for a week.

We could see storms moving across the mid-west but it looked like we wouldn't encounter anything serious today. We decided to ride to Sarnia and Flint before heading south. It's a little further, but would be a better border crossing and avoid the Detroit traffic.

We loaded up and followed Tom & Heather to his parents place. That's where they keep the bikes. As they were getting ready, I realized that my item to forget for today was sunglasses. My clip wasn't in its usual pocket, so I went back to the condo and found it on the kitchen table. That's two saves in two days. I better get my act together or I may be a day down the road before I realize the next item I forget.

By 9:45, we were at the Homer Watson exit on the 401 and had finished a McDonalds breakfast and fueled the bikes. We were finally on the road. Traffic was light but a few of the trucks gave me cause to wonder about Dalton's new speed governor law for trucks. Some passed me at well above the speed they were supposed to be governed at. We were running at a steady 112 KPH. There was a sign on the 401 indicating no gas at the next two service centres. They were also IIRC Petrocans so, after the closed pumps on the 400, I wonder if something is afoot.

Malachi phoned me while we were on the 402. Bike cell phone to bike cell phone. We talked about our respective trips. He said Sherm won't go any more than a couple of miles an hour over the speed limit. This I have to see.

As we pulled into the toll plaza at the Bluewater Bridge, a car with Michigan plates was entering the traffic lane from the duty free store. The lady in the passenger seat was looking right at me and I assumed she would tell the driver of traffic coming, but he didn't look and pulled right out. Not a problem because I anticipated it, but I gave him the horn to show my displeasure. He looked surprised and it seemed he couldn't figure out what he had done wrong.

There were about five cars ahead of us in the line at the US border post. We could have zipped right through the NEXUS line but the kids couldn't, so we took the regular line. I went first and the border agent asked if I crossed often. Yes, I replied. He asked if I had ever had trouble. I told him yes, since the start of last September. He asked if I knew why and I told him about the CNN article about a James Robinson being on the terror watch list. He then asked what they did about it, so I told him I was referred to secondary inspection. I also said a guard in the Soo told me the bad guy was black. He commented that we had different birth dates too, and was surprised they had done this. Then he wished us well and released us. The kids had no trouble at all.

Waiting for Heather & Tom to clear customs, I shut the bike off. I forgot to tell Sandy to unplug her heated vest so, when I pressed the start button, the battery dropped out and all the electronics reset. Time to redo the clock and opening ceremony. My trip meter was back to zero as well. We stopped and got gas at a Speedway right after the border.

Finding I-69 was a screw up as usual. I took the wrong turn and went through Port Huron on Business 69, but we were soon out of town and on our way. Traffic was light to Flint. There were two stretches of construction where we were down to one lane. In one, a Vulcan 900 with loud pipes followed us and then passed us when he could. I wonder who he was? I did see a bumper sticker on a truck that said "Deport Granholm". Sandy also pointed out a Little Caesar's billboard advertising a large Hot and Ready pizza for $5.00. It's $5.55 at home for a medium. Go figure.

In Flint, I made a sudden move to exit for lunch but saw it took Tom by surprise and he wouldn't have made the exit. I cancelled the move to keep us together and we went on to the 23 south exit. There, we almost ended up on the road to Detroit due to a surprise lane split but Heather caught my direction and took the proper lane from an inconsiderate SUV driver. We all caught the right road. South of town, we stopped at another Mickey D's for lunch. The coffee was especially bad, probably well past its "best before" week.

We were passed by a rider on a Harley who gave us a cheery wave. He had a patch for the Blood Brothers MC. Never heard of them and we were speculating, but a Google check shows they are a club for active and retired male police officers. You learn something new every day.

At 3:00, we stopped for gas at Milan. It was hot and sunny. Shortly after, the temperature dropped and it started to mist down. We stopped again and put on partial rain gear just in case. At the Pilot truck stop I pulled into to suit up, I accidentally pulled into the truck lot. I didn't realize that you can't get from there to the regular lot without pulling back out on the street. 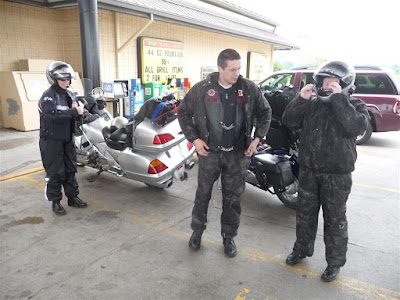 Getting suited up at Pilot
At one point, the sky was blue to the east and the west while it was spitting on us. The wind was out of the east, which is never a good thing. I slowed to 65 MPH to better match speed with the right lane traffic, although Heather was doing an excellent job controlling the lanes whenever I indicated I wanted to pull out to pass. The last rider in any group is an important position.

By Findlay, the temperature was back up to 22C. We saw a Cracker Barrel semi on the road. I have never seen one of those before, but I imagine they need to get things to their stores somehow.

In Lima, we splurged and split a room at the Hampton Inn. Then it was off to Cracker Barrel before hitting the pool and hot tub. Radar shows a big system headed our way. Hope it gets here and beyond quickly. I was able to check VROC blogs and photos showing that the early arrivals are having fun in Richmond. We have about 3 1/2 road hours tomorrow to get there.