The warm, sunny mornings are over. It was overcast and in the mid 50's as we rode over to The Circle to meet the breakfast crowd. The radar looked bad with a large green blob slowly gobbling up New Hampshire. The rest of the gang rolled in shortly after we did. 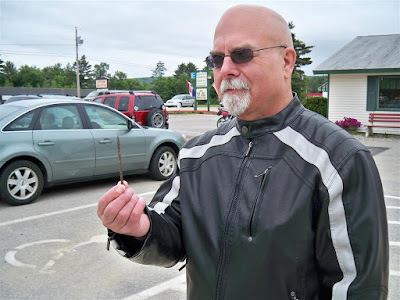 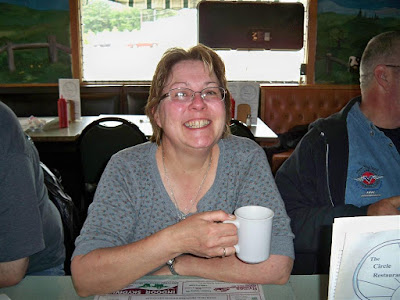 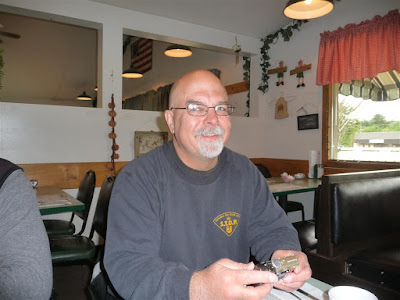 Gary, again too cheerful
The plan today was to rake a ride up the Kancamagus Highway but rain rolling in cut that short. Instead, a group of us decided to ride up to Weirs Beach on the shores of Lake Winnipesaukee. This is Biker Central during Laconia Bike Week and is usually jam packed with riders. We thought, with the weather, it might be a little less crowded. Right.

Some people had to make stops on the way so we agreed to meet at a Mobil station on SR 28. 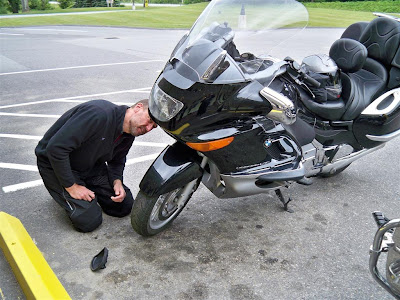 Is Brad praying to the BMY or checking his headlight bulb?
As we all got ready to head north, the raain started to fall. We followed Brother Bear in a tight formation all the way into tow where we lucked into a group of parking spaces on the strip. It was 11:00 AM when we got there so we agreed to meet at 12ish or 12:30, depending on who you talked to. The rain stopped and the humidity went up quite a bit. We walked around looking at vendors and Gary bought T-shirts. 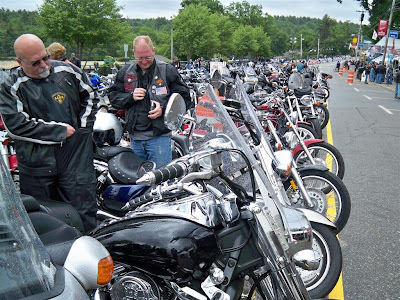 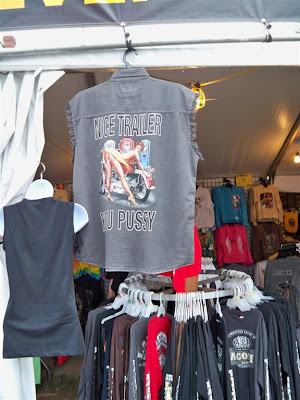 We Haul Our Rides Everywhere 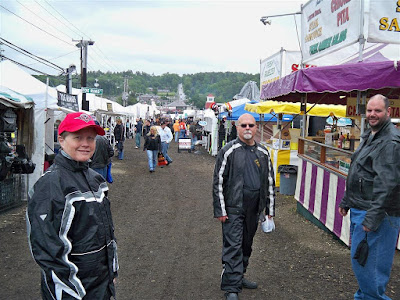 Sandy, Gary and Steve among the vendors 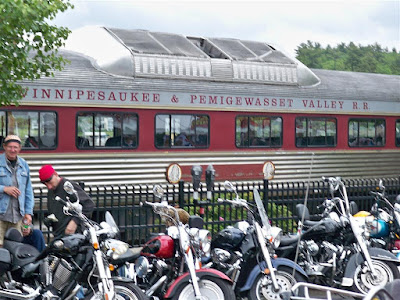 Now that is a name for a railroad
The 12ish thing didn't work very well. About 12:30, still waiting for a few, Gary, Sandy and I headed out to find a tail light bulb for his Vulcan 2000. We were aimed at a WalMart near Concord but got sidetracked by a herd of CanAm Spyders coming back from a test ride. Wonering if our friend Marc, marketing director for the Spyders, was with them, we followed them into the Funspot. Marc wasn't there but we met a fellow named Ken, originally from the Sudbury area. 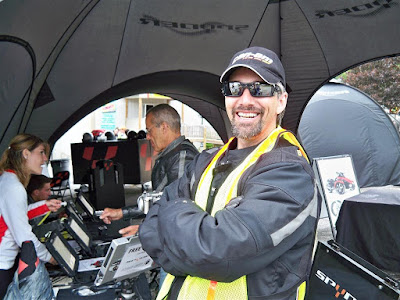 Ken from BRP/CanAm
We were wet again on the ride down to WalMart, psat the NASCAR track (no picture because the cameras were under the rain gear) and across to the motel. We had gotten 1157 bulbs, assuming this standard is what would be called for. In the motel lot, a lady in a cars said she knew it was bike week because it was raining. 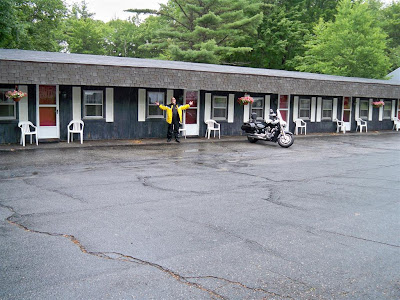 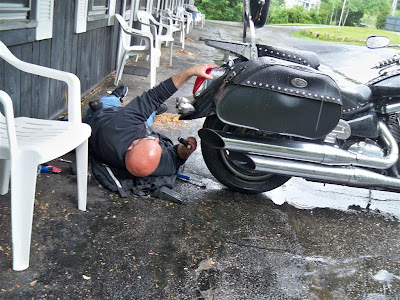 Gary trying to get the furshlugginer bulb out
Imagine our consternation when we found the bulb wasn't a 1157 but something with a push-in base. With only 21/5 watts to go by, I spent 20 minutes on Google figuring out it was a 7443. I made a call to Joe who tried to track it down.

Because the rain picked up, Joe came and got us in his car and took us to the campground. On the way, he threw Gary two bulbs because he had realized that they were the same bulbs he used in the new GL1800.

We fund some new arrivals at the Kaw Pasture. Notably, Cheyenne Dave and Sue had come in from Wyoming in their Dutch Star RV towing a trailer with his Drifter and a 1975 MGB. Dave makes the trek to Laconia every year. 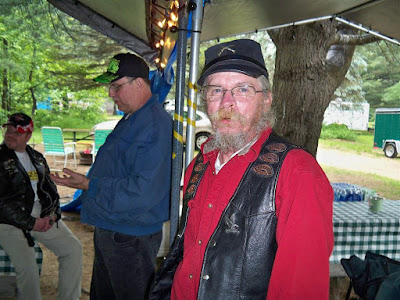 Cheyenne Dave with Ralph in the background 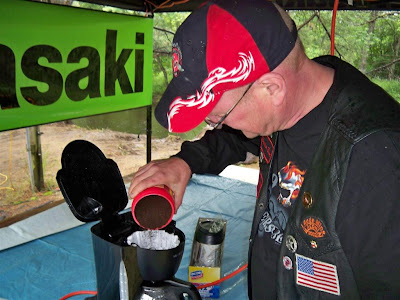 Brother Bear makes some very strong coffee
We left mostlyin cars to make out traditional 7:00 PM reservation at the Longhorn Restaurant. We had about 28 people there and the food was excellent. I had a 16 ounce prime rib, Sandy had a half rack of ribs and I think Gary had a 22 ounce Porterhouse. 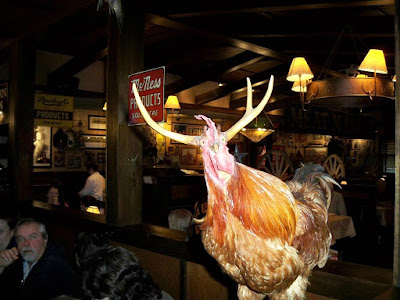 Today's Route to Weirs and WalMart