We awoke to what looked like a decent day for Jim to depart. My plan was to take him down Highway 69 and across 141 to Huntsville and set him on a path across Algonquin Park. He could then cut south and cross into the US at Thousand Islands on his way to Maine. The weather radar suggested otherwise. A large system was coming in off Georgian Bay, right across the proposed track, while a larger one had all of Canada east of Ottawa under rain.

OK, we would let the weather dictate the route. There was a window along the Highway 17 corridor through the Ottawa Vally so we'd ride that way and he could hook down from Arnprior to the crossing at Prescott/Ogdensburg.

Leaving about 7:45, the dark clouds blanketing the southern horizon told us we'd made the right choice. After a few spits getting out of town, we caught the blue skies again. There was a stop in Sturgeon Falls for gas and a Mickey D's breakfast and then we rode on to Mattawa, about 120 miles east of Sudbury where we said our goodbyes and I headed back. It was great having Jim visit. He is one laid back gentleman we are always happy to see. 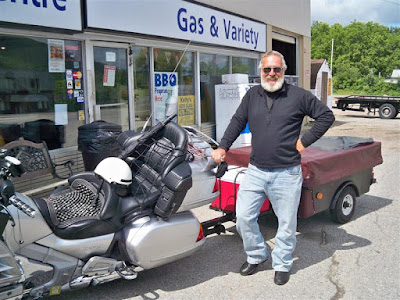 I expected to get hosed on the return leg but got into North Bay dry. I checked the radar on the phone browser and it looked good so I continued. In Verner at R&L, I stopped and bought some rain totes and checked the radar again on their bigger computer screen. There was lots of localized activity but, with luck, it would be a clear shot home. I left there running between two ugly cells and, although I got spit on a few times, the ride home was dry.

In Hagar, a fellow on a Harley Davidson CVO Springer pulled out in front of me and I followed him all the way to Sudbury. He had no luggage or windshield, just a Canadian military pack strapped to his back, and was moving along at a good clip.

Approaching town, there was one more big black cloud and I just made it home before the rain started in earnest.

I rode from A to B and Jim hopefully continued on to C.