We woke up and got ready to go. As we were suiting up, I found the bracket that holds my headset on had broken, so we did some fixing with electrical tape. A minor annoyance.

Thanks to Rob and Jan for putting us up and feeding us. We don't see nearly enough of them from year to year. 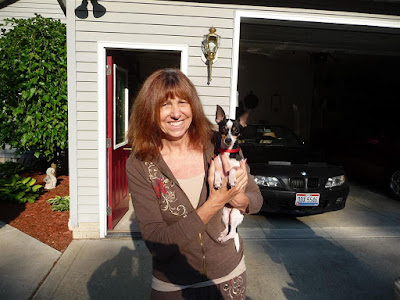 Jan with Chi Chi
We set out, getting onto US 2 East. This would be a big day for the new riders, with Tom turning over 10,000 Kms on the way to Buffalo and Heather doing the same before they got home. From to, we merged onto I-90 through Cleveland. Traffic was surprisingly light all the way along.

There was an east wind through Cleveland, not a good sign, but it had changed to a north wind by Erie. We stopped at a Mickey D's for a break and met a nice, older Dutch couple who, in limited English, raved over Harley Davidson's.

I don't like the split speed limits in Ohio, 65 MPH for cars and 55 for trucks. It creates speed differentials which are a source of traffic problems.

In Northeast Pennsylvania (a town, not a general location) we fueled with the Suzuki's for the last time. Hugs and goodbyes. They have done very well and we've enjoyed riding with them but they will be on their own after Buffalo. Then it was onto the NY Thruway for the last stretch together. As we exited in Buffalo, the EZ Pass booth told me to phone their office. Not sure what this was about, but first we escorted the kids to the Peace Bridge ramp and then headed back to I-90 East. 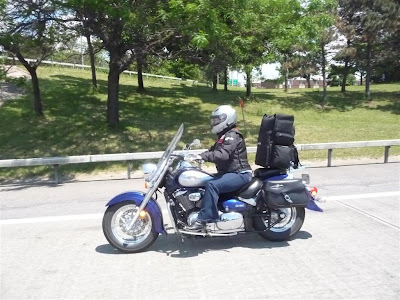 Heather taking the ramp to the bridge
We got back on the toll road and the sign told me to Call EZ Pass so I stopped and did on the side of the road. Peace Bridge EZ Pass (my issuing agency) told me my account was fine. We went to one of the service centres and I phoned the NY EZ Pass office. They didn't know what the problem might be but said to keep using the lanes. If I get violation charges, call them and they'll adjust them. I need to get into a manned booth and see if the transponder is malfunctioning.

On a side note, when we went into the service centre, I checked to see that the bike key wasn't in the ignition. When we came out, I found the key on the bike seat. Damn, anybody could have just walked away with a slightly used GoldWing. I have to check everything twice.

We ended the day in a Microtel in Baldwinsville NY. There were two riders, one on a Wing and the other on a Hog, from Florence Oregon. Theyy were homeward bound after a trip to Vermont via Winnemucca, the Grand Canyon and Branson. Quite the routing. We ordered Pizza Hut delivery got a call from Heather that she and Tom were home safe. We turned in early without me getting anything accomplished on the blogs.

When you were in Erie, you were a little more than an hour's ride from our house in Warren, PA.