The big storm was just reaching us at 6:00 AM. Checkout time was noon and it wasn't far to Richmond, so we didn't rush. At 7:00, we could hear thunder. We went down for the breakfast of biscuits, gravy and other things and then I had time so I posted my travel bills and caught up on two days of blogging. 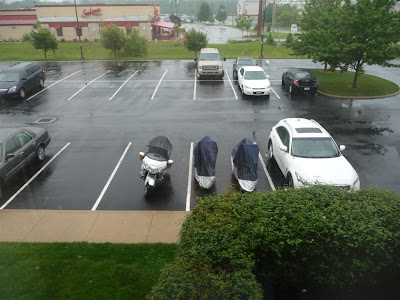 The Bikes Are Wet
At 9:15, it was clearing to the south of us and the storm had almost moved through, but there was a second line of rain hooking down from Kokomo that was going to hit us. It looked like we would have to set out wet.

Finally, we headed out in light but steady rain at 10:25. I have wiped the bike down two nights in a row and it has proved futile with the weather. I guess this is a new habit I won't be continuing. The rain let up but we continued to have periods of spitting, alternating with almost dry roads.

We stopped at a rest area north of Cincinnati for a break and, as we were leaving, I broke the zipper on my new rain suit. The slider broke right in half, leading me to believe that there was a flaw in the casting. The Velcro closure is excellent, so I will be able to get by without zipping up and it's even easier to do up and undo. I'm going to consider this a modification for the better instead of a failure. 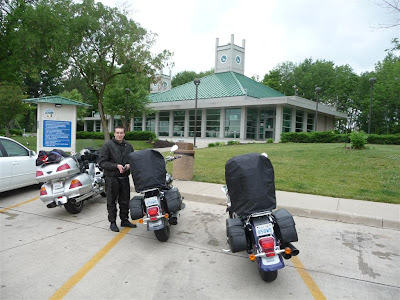 Tom in the Ohio Rest Area
Entering Kentucky, we climbed the Covington Hill and stopped at an exit with a McDonald's for lunch. This must have been the day when Mickey was giving away free hamburgers because, at 1:30, the lot was full and people were waiting to get in. We went next door to Arby's and met a man whose family hails from Chatham, Ontario.

On the way out, a local cop warned us to hustle because boomers were on their way. We hauled the last 90 miles towards Richmond at a good clip, noting how much better the road was in Kentucky. The rain spit lightly most of the way and, after Lexington, dark clouds appeared ahead of us. Then we could see lightning and I considered stopping but, watching the miles count down, I thought we might make it. Almost did. Ten miles out, serious rain started falling. One mile out it turned into a frog strangling downpour and we slowed to 50 MPH in the right lane with out four way flashers on.

In the rain, we exited and crossed over the Interstate to the best Western where we pulled in under the awning. We had arrived at the Here To Kingdom Come iteration of the Wolfman's Wandering Rally.