We sat over breakfast and talked to a number of people including Epibunny, who was heading back west as soon as she finished eating. Then we visited in the parking lot while scoping out the ride for the day. 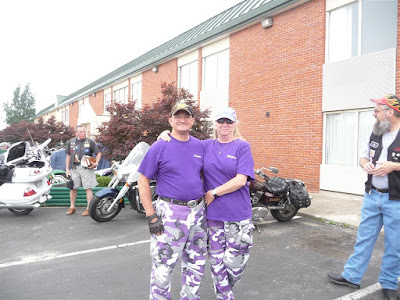 Wompus says Montene dressed him this morning
The four of us and Gary decided that we would visit the Red River Gorge and Natural Bridge. We headed out of Richmond under a high overcast and followed SR 52 out past Irvine (with the ubiquitous coal unit trains in the yard) and Ravenna before turning onto SR 213. SR 213 is one of those really twisty, technical roads, the kind you usually associate with North Carolina or North Georgia. I took it easy so I didn't lead my young followers in over their heads, considering this was the first of this type of road they had ever encountered. They did well.

When 213 ended in Stanton, I stopped to see how they had done and get a new route fix (Gary had photographed the map at the hotel, so we needed to periodically consult his camera). Heather was smiling and Gary said she had grounded the boards in a curve and held the bike down all the way through. That bodes well for the future. 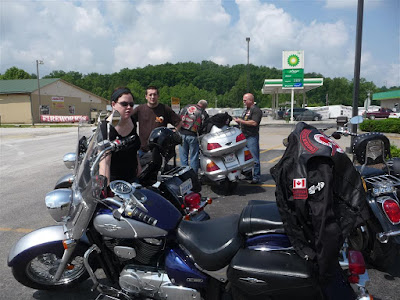 The team catches its breath in Stanton Ky
From Stanton, we took the Bert Combs Parkway to Nada where we stopped at a tourist information place before following the Red River Gorge. Highway 11 seems to have been taken over by bicycles that travel two and three abreast with no concern for cars backing up behind them. It was just like US 19 in Blairsville Georgia. We turned onto the little road that runs through the gorge and immediately encountered the Nada tunnel. 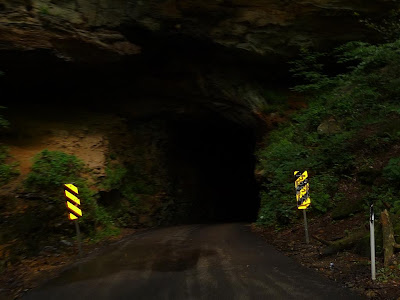 The mouth of the Nada Tunnel
The gorge road was a very nice ride, slow and twisty through heavy trees. We crossed two narrow bridges, with the second putting us in Wolf County where they don't seem to have as much money for roads. We stopped at a pullout at Parched Corn Creek for photos and had Wrong Turn, CB and a group catch up to us. Then Scooter and Playthang stopped for a moment and continued on. 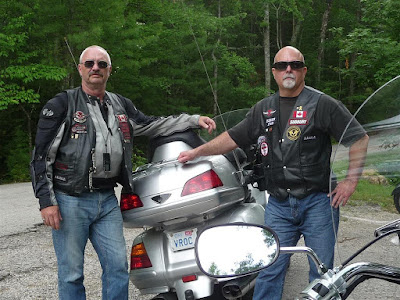 Gary and I at Parched Corn Creek 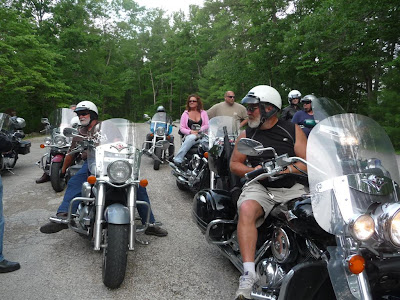 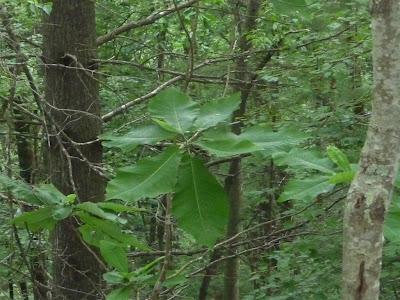 Big Leaf Magnolia, according to CB (the leaves were huge)
South of the Combs Parkway, 715 opened up and had very nice sweepers back to 11. Then we cut north to the Natural Bridge Skylift, where we encountered multiple groups of VROCers coming and going. The Skylift went straight up at the end. First we took a path with some muddy sections to the overlook to gaze across at the Natural Bridge. Then, after Heather and Sandy took the lift back down, Gary, Tom and I walked over and stood on the bridge. The reason you go to the overlook first is because you can't tell you're standing on a bridge wheen you get there. 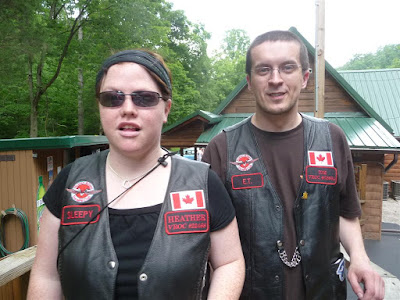 Heather and Tom waiting to ascend 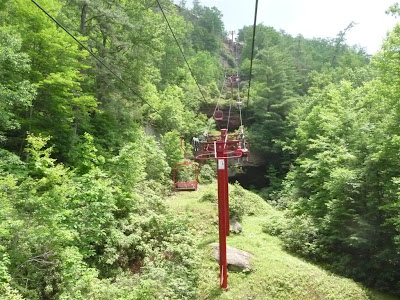 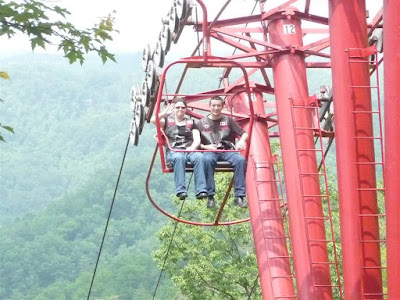 Heather and Tom at the top 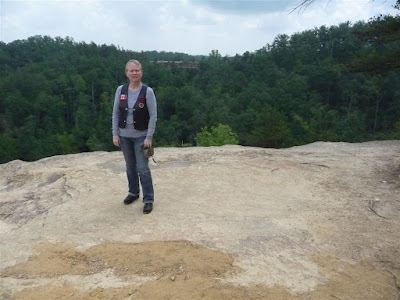 Sandy with the Natural Bridge in the background 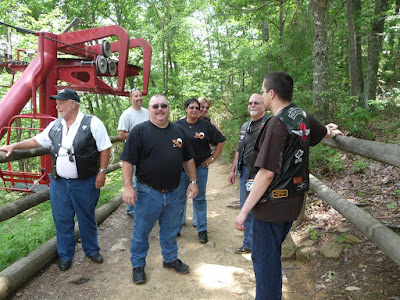 Meeting Tobey, Brad, Kevin, Steph & April on the way to the bridge 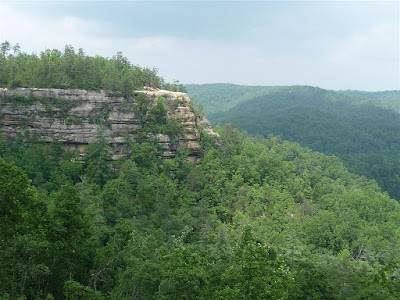 The Overlook as seen from the Natural Bridge 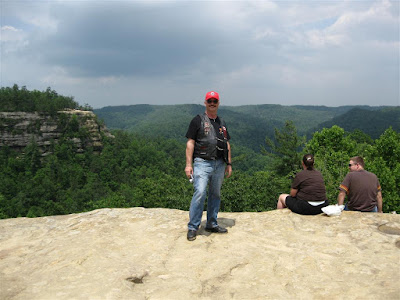 Me on the Natural Bridge (look Ma, no railings)
(photo by Gary) 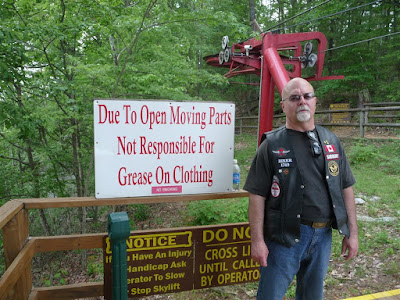 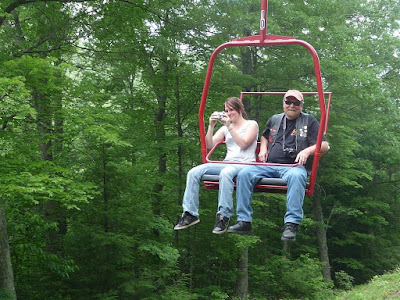 Deerslayer and his daughter Alex 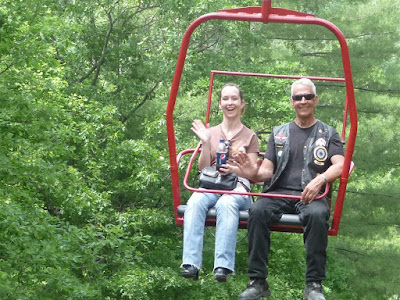 Trucker and his daughter Julie 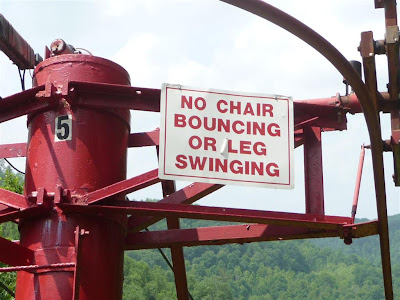 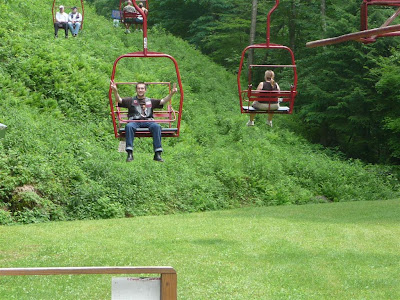 Tom nearing the bottom
From the Natural Bridge, we highballed back home via Bert Combs Parkway, I-64, 627 and I-75. We fueled in anticipation of tomorrow and had a bite at the Waffle House. The server pressured us to take our bottomless drinks to go. 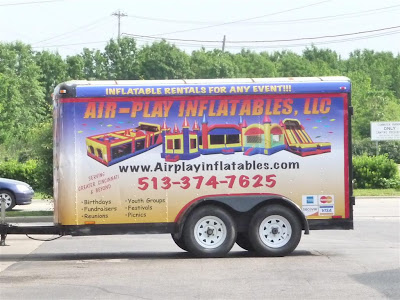 I'm not sure why this made me think of Mean Susan and Thrillseeker
We spent the evening around the parking lot visiting, not wanting it all to end. 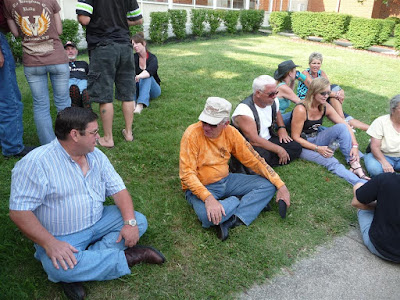 Coyote, Oldman, Toj, Susan, Kelly & Deb
(nobody sat on the grass after learning about chiggers) 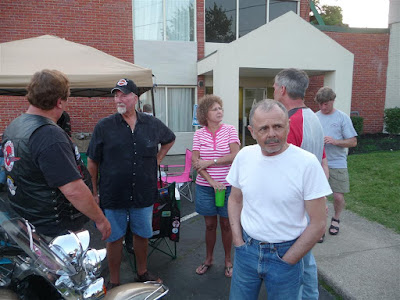 Stewey, Wiliedog, Pam, Scotty, Tom Miller & Jamey T.
About 9:00 PM, I started making the rounds to say my goodbyes. Three hours later, we finally toddled off to bed. This was a magical weekend and we thank Tom, Denise and all the people who had a hand in making it come true.

That was a good idea listing other people's photos from WWR3. It would be nice if there were a "links page" on the VROC website so that all the blogs and photo pages that pertain to WWR3 could be put in one place.