We were blinded this morning by a large yellow thing hanging in the blue eastern sky. After the last three days, what could we have done to deserve this?

We were late getting to the Circle. Everyone else was later. The ride today was supposed to be to Dover for seafood and then to the Nubble Lighthouse in Maine. I needed to visit Venco Wings with the gift certificate and a toll booth to check the EZ Pass. We would head out and Brother Bear would update us on the group by phone.

Venco Wings is a nice little shop on SR 129. In addition to having a GL1800 guru, the shop also has a guy who specializes in older Wings.They had many cosmetic things but I don't put them on. We settled on a nice shirt and jacket for Sandy and I splurged and bought a Hopnel storage pocket for the fairing, a Canuck flag and a rubber jacket for my trunk remote. 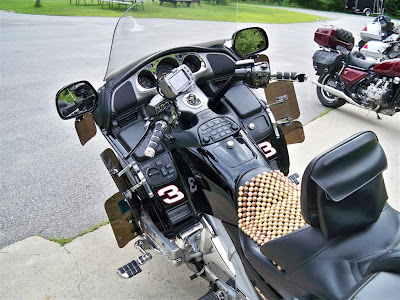 DE GL1800 at Venco
From Venco, we headed for Pittsfield to find a bank. It was right where the GPS said it was. 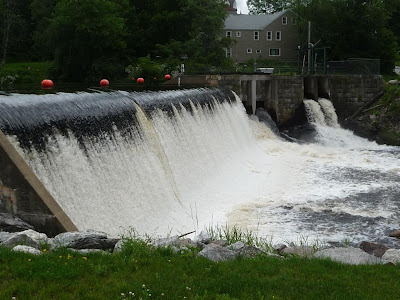 A dam in Pittsfield
Brother Bear had called to say the group was on the move but they wouldn't be going to Dover. With a black cloud on the horizon, we returned to the motel where Gary and Sandy remained while I rode to Dover to find a toll booth on SR 16. It cost me $.75 to confirm the transponder was dead. Then I went back to Northwood.

After riding a series of two lane roads here, I have come to the conclusion that most New Hampshire people are in no hurry. Back home, these people would be run over.
We spent the rest of the afternoon practicing packing the additional gear and napping. I finally caught up all my blogging. Then we went out for supper at the Northwood Diner. It was closed and Johnson's was so busy cars were parking in the adjacent field. We headed for the Circle but Sandy changed her mind and here's where we ended up. 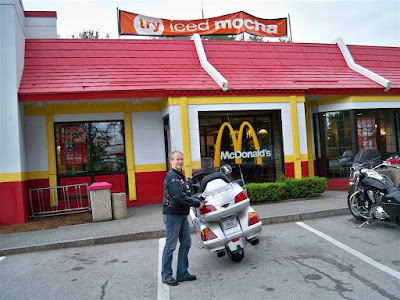 We deserved a break today.
From there, we made a short visit to the campground to say goodbyes. We'll see some in Maine in September and some other places down the road. We will see Brother Bear and Brad in a couple of weeks in Wellsboro Pennsylvania for a two week wander together. Then it was back to the motel and early to bed. I see Sherm and Mike from Calgary made it home. We may be the last WWW3 riders to get home when we arrive tomorrow.

The radar shows a large system moving in overnight. We have the rain suits ready.
Posted by Jim "Skid" Robinson on 6/20/2009

Wellsboro is a pretty little town. We have visited Wellsboro and PA's Grand Canyon a few times. Wellsboro is only a couple hour's ride for us. The Steel City VROC group has been talking about coming up that way sometime. We hope so.