After getting to bed about 2:00 AM, I was awakened by a fire alarm at 5:30. The alarm didn't actually intrude on my sleep, I was shaken awake by Sandy asking me if the ringing bell was a fire alarm. It soon shut off, but then I couldn't get back to sleep.

The full hotel breakfast included very strange eggs. They are hard to describe, but resemble those found in an Egg McMuffin. The bacon appeared to be the microwave stuff. There was a lot of other foods and I had most of it including the biscuits and gravy. Heather made a hotel waffle, the kind I screw up whenever I try to make one. Hers was perfect.

The run to spread the final segment of Kilo's ashes from Natural Bridge left at 10:00. We didn't go and the rain started about two minutes later. I heard later that the ride violated two cardinal rules. Each ride is supposed to have ONE leader and the rest are supposed to follow him or her. This one had several leaders and people arrived at Natural Bridge from ever direction. But they got the mission accomplished. 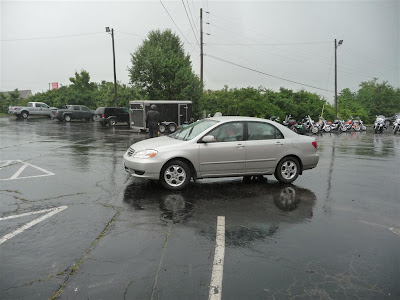 VSP doesn't seem to mind the rain
We kicked around until the rain stopped somewhere before noon visiting with some old friends and meeting a few new ones. 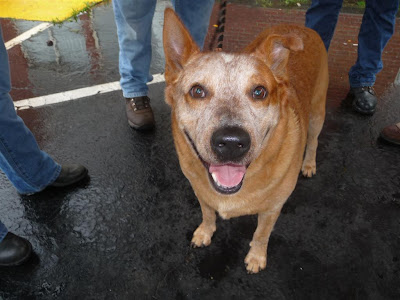 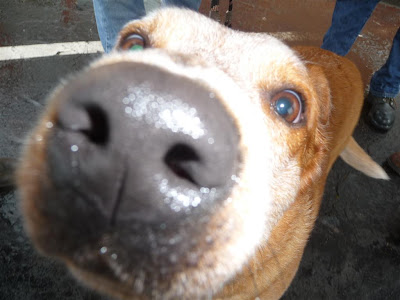 Taz checks out the camera
About noon, the family plus Sherm and Lucky Al made a WalMart run. I needed another Timex Expedition Velcro watch band. Heather picked up some sunglasses and the others grabbed various items. Then we stopped at a White Castle for some lunch. This was my first time in one. The little sliders were tasty and I now know why Harold and Kumar were trying to get there. After lunch, we hopped back to the hotel because the skies were threatening and we didn't want to get soaked on a two mile ride.

Back at the hotel, Solo from Colorado Springs' buddy Steve had picked up a screw in his front tire. I volunteered to try a Stop&Go plug in the hole. This is the same kit I practiced with on my own punctured tire. I had lots of spectators offering opinions as it took me three tries to get the plug in properly, but it was finally done right. Ham from Washington provided pliers and a nifty compressor to refill the tire. Very seldom am I ever involved in demonstrating anything technical. In case anything went wrong, I told Steve my name was Bob Smith:-))

(I got word Monday that Steve and Solo made it back to Colorado Springs without mishap.)

As suppertime rolled around, we moved towards the hall to secure seats. We know we were going to be about 30 short. Sandy usually scopes out the food line and arranges to be at the front. This time, I wandered around as the caterers were setting up and found Cargo paying Tom. I paid too and fell into line behind Cargo. I tried to get Sandy's attention but she was otherwise occupied. By the time she noticed, the rest of the room caught on and we had instant line right out the door. While Sandy & Sherm made it to the front, Heather and Tom ended up at the tail end. Luckily, there was enough to go around and the ribs were excellent. 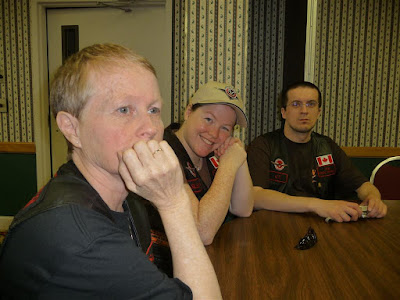 The family waiting for food 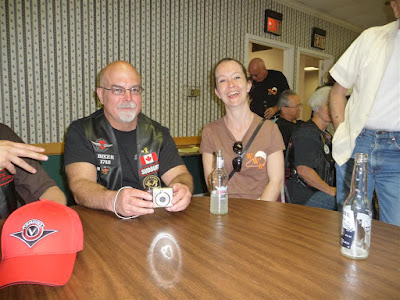 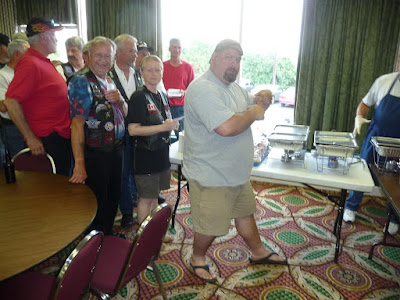 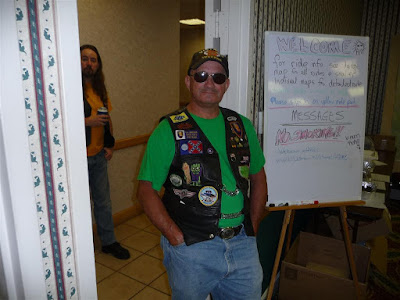 Wompus after the meal
After the meal, I wandered outside. Flamekiller was on the phone and told me I got 15 qualifying points in our NASCAR Fantasy League for the race at Michigan. It was surprising how many of the 36 fantasy participants were actually here in the building.

Inside, they held the drawing for the raffle prizes. The 50/50 prize of $1,200 was won by Denise Miller. A young man named Max was the recipient of the proceeds. He suffers from a kidney disease and will need a very expensive transplant soon. True to her nature, Denise donated her winnings back making it a 100/0 draw. Sandy won a buff which Heather purloined.

The parking lot was busier than last night. I asked Kudzu, resident expert, about David Carradine's passing. Dan said that you should always have a spotter for those types of activities. I found Oldman from Texas talking to John Hoover, formerly of Kawasaki. John was the father of the Vulcan Classic and is deservedly held in very high esteem by the VROC cognoscenti. Later, Epibunny from Washington State reprized her Reading of the Manual, a tradition she started in Oregon last year. It is a very sultry reading, but you'd have to be there to get the full effect. Teri Conrad (the official Kawasaki rep) was justifiably shocked that these outrageous words could be found in the manual. 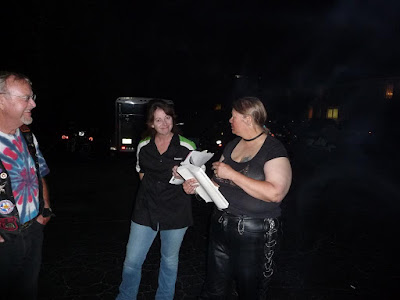 Sherm looks on as Epibunny (right) Reads The Manual to Teri
Despite our desire to have the night go on forever, we decided discretion was the better part of valour and turned in before 11:00.