We were up at 6:00 AM, whether we wanted to be or not, to allow time to be packed before breakfast. It was a sad time as we said goodbyes to those who were similarly getting ready to leave. When we first got here, I told Tom that the most common thing forgotten in hotel rooms was a phone charger. Mine would have been added to the list if he hadn't noticed it as we were getting suited up. I'm getting old.

Radar showed a storm moving through Louisville but it didn't look like it would affect our ride. We rolled out of the lot before 8:00, taking a turn through downtown before hitting I-75 North in 20C foggy weather. On the first leg, Sandy's mic wasn't working so it was pretty quiet until Rainman and Fireball (Ray & Lisa) of Michigan thundered by with a wave. They looked incredibly good riding their Nomads in perfect unison.

The ride was uneventful. I-75 to Cincinnati, then I-71 past Columbus to Ashland. Heather got cut off by an SUV and, after avoiding him, graced him with a glare and he made himself scarce. I told her to get used too it since bikes are pretty well invisible to car drivers. Defensive riding is a must.

From Ashland, we took back roads due north to Vermilion Ohio where we'd spend the night with our old friends Rob & Jan. SR 603 was particularly nice riding. There were a lot of southbound bikes, mostly Harleys, reminding me that Ohio Bike Week in Sandusky was wrapping up today.

We arrived at Vermilion at 3:00 PM with Tom noting that his speedometer was behaving erratically on deceleration. I took it for a ride and confirmed the problem, then found a kink in the electric cable from the sensor on the front wheel that let it rub against the brake rotor. Some rerouting and the problem was solved although I recommend either replacing the cable or taping it well.

Rob and Jan have a beautiful home, complete with pool and hot tub in the back yard. We swam, soaked and played ball with ChiChi the rat terrier. Fascinating little dog and smart as a whip. 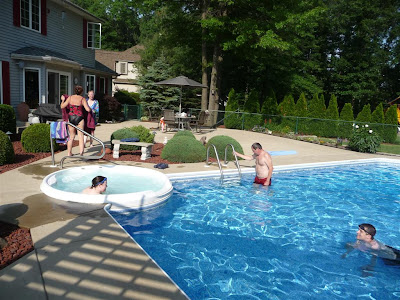 The gang at play

We had a supper of lasagna, salad and garlic bread. Very tasty and just what we needed. Then we visited for a while before going downstairs to play some demented game of darts. This was different from the usual game and I discovered neither my wife nor daughter could throw a dart with any level of competence. There were darts in the wall, darts in the floor, in fact darts pretty much everywhere except in the board. They improved a little by the end of the game but it was still pretty scary.

Following the dart game, we turned in for the night. 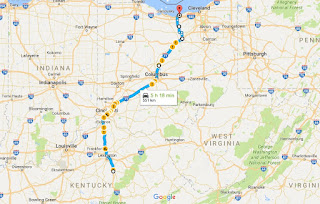