The radar indicated that the rain was moving out but that we would be the last place to see clearing. It's getting hard not to take this personally. We rode over to the Circle where we saw U-Turn's Nomad sporting its new root beer colour next to Joe's Wing. 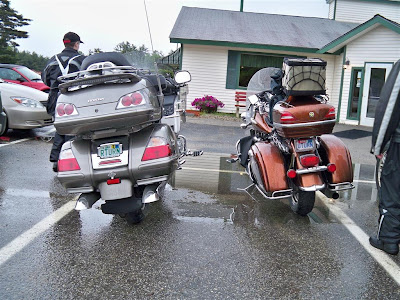 Look at the wet ground 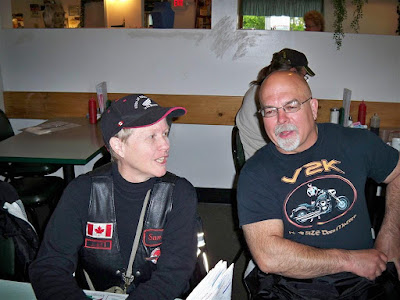 Sandy and Gary discussing the breakfast options
After breakfast, we wandered back to the campground and mingled. Today was poker run day and we had planned a nice ride through the countryside to Hookset Kawasaki. The ride was to be abbreviated due to the weather but then we took a vote and decided to ride straight there. 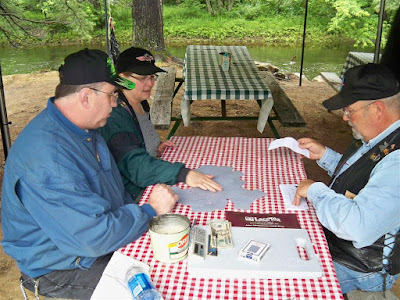 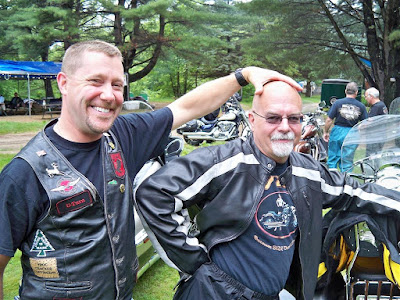 U-Turn, thinking he found a bowling ball, looks for finger holes
The new route to Hookset was straight down SR 28. This was an excellent choice bacause, while no rain showed on Brother Bear's Canadian made) Blackberry radar, we were enveloped in a fine mist. On the way, we only saw one other bike. At Hookset kaw, we found they had no rain totes (overboots) for Sandy. We looked at bikes and accessories and some took advantage of the 20% discount offered to our group. 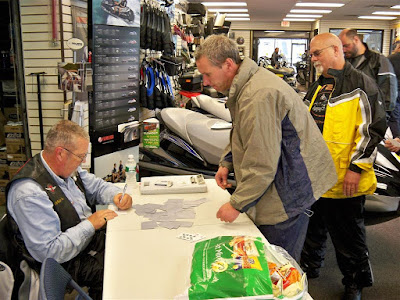 Joe oversees the drawring (NH pronunciation) of the final cards
From Hookset, Sandy, Gary and I headed out through the ongoing mist for Northwood. We stopped at Johnson's Steak, Seafood and Dairy Bar for lunch. We all had different soups and dessert. 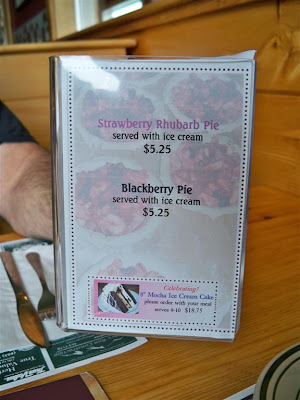 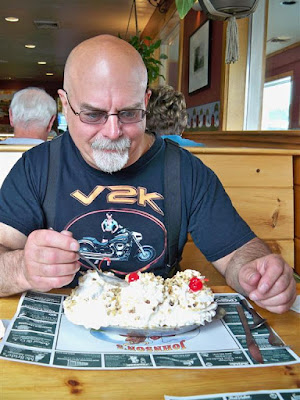 Gary ordered this monstrosity (but couldn't finish it) 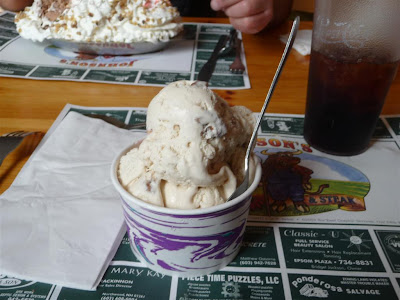 Sandy had a kids portion of ice cream
From there, we took a break at the motel before returning to the campground for the raffle and BBQ. There was over $6,000 in prizes on the table. Everyone was limited to three regular prizes and then all the tickets were put back in for the seven grand prizes. There was even a special GoldWing draw that three of us tried for. 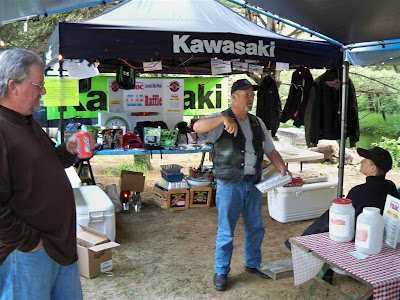 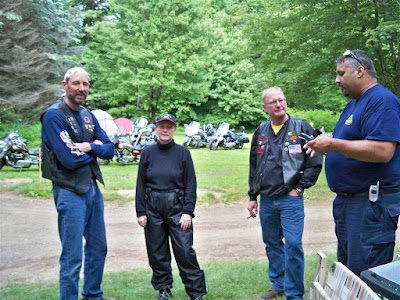 Brad, Sandy Brother Bear & Paul
I had three tickets and won three prizes. The Wing prize was a $100 gift certificate from Venco Wings, a local shop. I also won a a Stop and Go tire plug kit and a certificate for Nomad lowers. Gary picked up a helmet and a discount on a Mustang seat. He traded the seat coupon to me for the plug kit and I'll give the Nomad prize to someone still riding one. We came up empty on the grand prizes.

After the raffle, the food came out. there were BBQ hamburgers, hot dogs and kielbasa along with beans, salads and desserts. As the meal was going on, blue sky appeared above us. 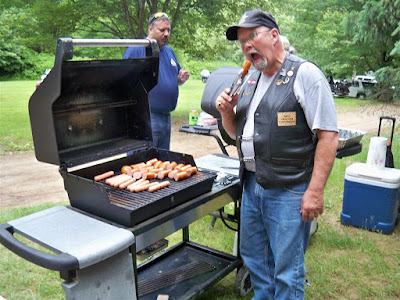 Joe testing the food
After supper, we returned to the motel where Snappa and Tom & Chris (also on GoldWings) were also staying tonight. Of four VROC bikes here, Gary has the only Vulcan.

Tomorrow's weather looks good and we are hopeful.
Posted by Jim "Skid" Robinson on 6/19/2009