At 5:30, the weather radar showed the big system we had been expecting had shrunk and hooked south. We suited up anyway and by the time we left at 7:00, misting that wasn't evident on radar had begun.

We headed west and caught I-93 North, not the usual route but necessary because the bridge over the St. Laurence River at Cornwall was still closed due to a dispute with the local Mohawks. As we moved north over patches of new pavement (with related signs indicating this was done with stimulus money), the rain picked up and we saw groups of bikes pulled over and suiting up. This continued up to Franconia Notch State Park, after which it eased up.

Near Vermont, with the roads starting to dry, a wild turkey wandered across the road in front of us causing me to brake hard. Gary wasn't as concerned but then he has never been hit by a wild turkey while riding.

In East Lyndon, just north of St. Johnsbury Vermont, we stopped for gas and breakfast. The Wing took 3.2 gallons compared to 3.9 for Gary's Rogue. He suggested that while the 2000 Vulcan was less fuel efficient, Rogue riders look better. McDonalds was the breakfast of choice.

At the border crossing near Stanstead Quebec, US Border Patrol officers were pulling over and searching bikes leaving the country. They had several stopped and ordered a truck pulling a bike trailer into a holding spot. An agent said he would need to see our ID but, as soon as they saw the Ontario plates, we were released without any further ado. They must have had a tip about some Quebec riders. The Canadian border check was anti-climactic and we were soon headed north on the Joseph Armand Bombardier Autoroute. Parts of it were OK but a lot of the asphalt looked like it had leprosy. We saw one deer almost hidden in tall grass on the side of the road but it turned and ran away as we went by.

Soon we turned onto Autoroute 10 headed towards Montreal and the traffic picked up. My Zumo had this as AuT 10 O (for Ouest). It kept calling it Ow Tee 10 O. Kim called and wished me a Happy Father's Day. I had forgotten all about it, but was glad to have the phone on the bike.

As we approached the Champlain Bridge, we encountered stop and go traffic. 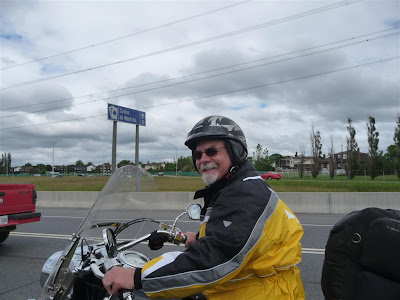 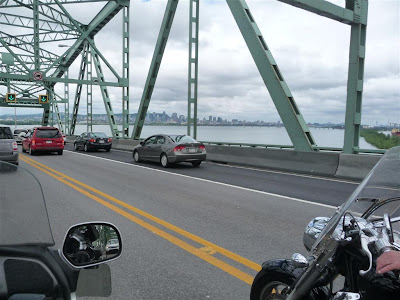 Montreal skyline seen from the Champlain Bridge
The backed up traffic seemed to be due to rubbernecking at an accident on the far side of the bridge and the other side of the road. Once by this spot, we were back up to speed again.

Gary needed gas so I followed the GPS directions and took a tour of downtown Ste. Anne de Bellevue to two non-existent gas stations. This looks like a really quaint community but I would rather have had the fuel where it was supposed to be and I found Sandy doesn't like me swearing at the GPS. On the way out, we found a station that wasn't in the Garmin database. After fueling, the battery had a drop-out (again) as I started the bike and reset all the electronics. Battery or charging system? This would bear checking tonight.

Back on the highway, we soon crossed into Ontario and the road changed to 417. The right lane was so rippled that I stayed in the left as much as I could. In Casselman, we stopped for food at one of the slower Tim Horton's I have seen. Then it was on towards Ottawa with the weather getting darker as we went along. We slipped between several nasty looking cells as we went through Ottawa and continued on arriving at a Travelodge in Pembroke at 5:00 PM in stifling heat, reminding us that it was the first day of summer. 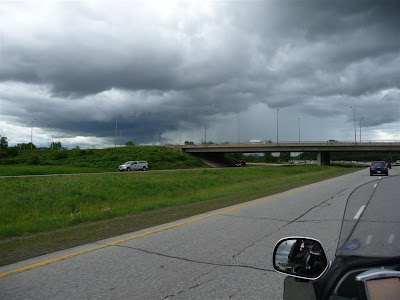 One of the cells around Ottawa
We went across the road for supper at Finnegan's. The food was OK but the server, while pretty and engaging, wasn't as quick or competent as I might have liked. Then it was back to the hotel where we blogged and watched TV until bedtime. We couldn't get the NASCAR race in Sonoma California because it had been relegated to TSN 2 and, despite all the channels available in the hotel, this wasn't one of them.

On a positive note, my multi-meter showed the electrical system at 14.4 volts at idle making it virtually certain that my electrical problems were due to a battery that was on its fifth year. 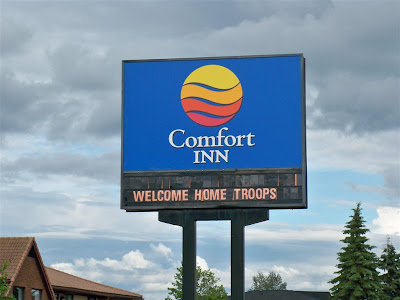