The plan for the day was to make the Memorial Ride up over the San Juan Skyway, also known as the Million Dollar Highway, from Durango up to Silverton and Ouray and then swing back around on Colorado 145 to Dolores and Cortez. This was a 224 mile run that would again challenge my acrophobia. I asked Malachi to lead the ride because he was familiar with the roads and he graciously agreed. Then, after breakfast in the nook, I saw a certain look in Sandy's eyes and floated the idea that we not go on the ride. She brightened visibly and I told Mal he was on his own.

Sherm, Sandy and I waved goodbye to the rides heading out to the Million Dollar Highway and Four Corners. Then we rode to WalMart so Sherm could replace the battery in the remote for his Harley Davidson alarm. After that, we went to the other end of town to Mesa Verde Motorsports, the local Honda/Yamaha dealer. I had heard they had some J&M components hanging on the wall and I wanted to replace the faulty lower headset cord that has been causing me all these problems. In fact, they only had three items that had been hanging there for a very long time. Lucky for me, one of them was the correct cord and I guess they had old prices because it cost me $26.83, tax included. This cord normally goes for almost $50.00 these days.

Back at the Super 8, we found Brillo trying to break into his own Corvette because the keys were still in the ignition. Mad Kaw was assisting but they were having difficulty because coat hangers are now much more flexible than they used to be. We offered to cut the convertible top but he didn't seem to enthusiastic about that idea. Then a local service truck arrived with some rigid wire and they were able to snag the keys from the passenger side. While they were doing this, the alarm went off, but they soon had the door open and all was well in Brilloland once more. 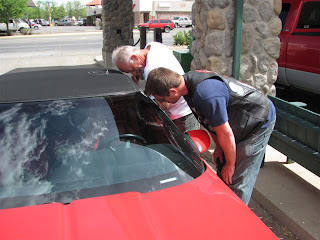 Brillo and Mad Kaw trying to break into the 'Vette
Another interesting sight was Vickie, Flying Biker's wife. While he was wandering around the lot, she brought out her tool kit, got down on the ground and proceeded to pull a baffle out of her exhaust pipe trying to find a rattle. She rides, she wrenches and I hear she cooks well, too. It later turned out one baffle had broken into three pieces. 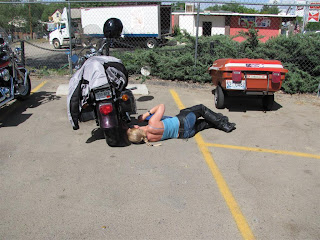 Vickie removing a baffle
Sherm headed over to the library to post some more of his blog photos (you really need to check out Sherm's photography to get a flavour of what we're up to) while I worked away using the slow Super 8 connection. They have three access points and, when one bogged down, I just switched to another. After Sherm got back, we wandered over to Burger Boy for some old fashioned drive-in burgers. They were OK and the price was extremely reasonable. 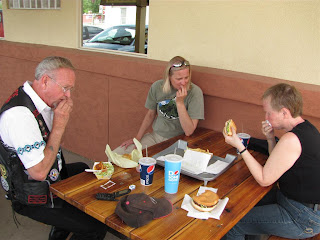 Trouble watches Sherm and Sandy eat at Burger Boy
The afternoon was spent hanging out in the parking lot with a few people. Sherm got a City Market discount card, so we were able to pick up folding chairs for $7.51 each, taxes in, allowing us to be a little more comfortable. There were a lot of these chairs appearing as time went on. 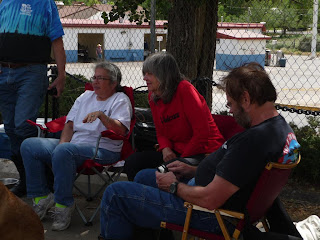 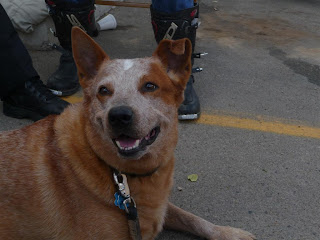 Margot and Hot Sauce's dog Taz
Later in the afternoon, the rides returned wearing rain gear. The weather was changing here too, cooler and cloudier with some rain drops. A small group of us went down to Jack and Janelle's for supper. Our table included us, Sherm, Slammer, Oldman & Slash from Texas and Scotty & Marlene. As we were finishing, another whole crowd wandered in. Then we returned to the hotel where Badger was hard at work selling raffle tickets. 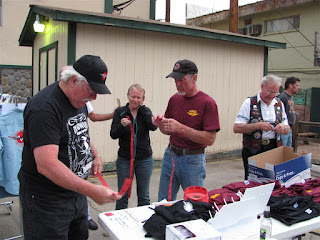 Badger selling tickets to David Barnes & Sandy with Sherm and Kopperhed in the background
As the sun went down, people mingled in the parking lot. We came across a (mostly) yellow 1974 Norton Commando which has been upgraded many ways and is a local guy's everyday ride. There is a Norton shop here that is world famous for keeping the old bikes running. 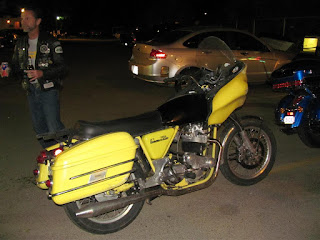 1974 Norton Commando
Then we were treated to a spectacular lightning show over the mesa and then all around us. Rain started to fall and people moved under the overhang in front of the lobby, much to the consternation of a few regular guests. The girls kept wandering off to do their traditional lemon shots and were getting more and more boisterous. 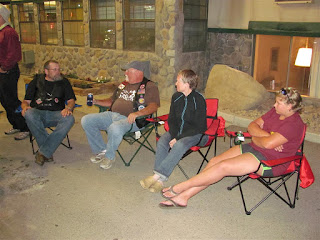 Waterman and Cheap B talking while Sandy and Elyse look on 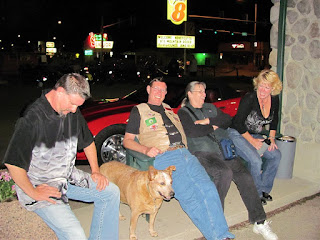 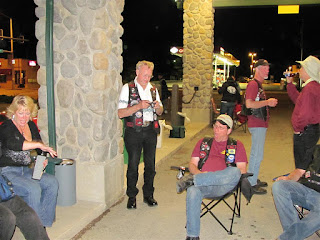 Malachi watching Tracey while Sherm checks his camera
Badger and rainman in the background
I'm sorry I didn't get more pictures but I was too busy visiting. Sandy wandered off to bed about 10:30 and I wasn't far behind at 11:00. We could hear the party going on for a while outside but, before too long, it quieted down.
Posted by Jim "Skid" Robinson on 6/11/2010

1974 Commando how sweet is that,I can only imagine how nice it sounds!Have a blast ride safe take lots of photos and be careful.