It was downright cool this morning.  I woke up at 4:00 AM and put the gas furnace on.  I'm not sure what possessed me to do this because I have to fill the propane tank while the electricity is included in my site rental and we do have an electric heater too.  Next time.

I finished the blog from yesterday while Sandy used the RV shower.  We discovered that my comfortable blue jeans were missing so they will probably be found in the dryer when we get back to Sudbury.  Add a shopping trip to Walmart to our list for the day.

I unloaded the bike from the trailer, topped up the air in the tires and we started out towards Cherokee on US 19, heading up the hill towards Soco Gap.  There were two cars ahead of us and the lead was crawling.  When we got to the passing lane near the top, the car behind him pulled out to pass and then stayed in the left lane.  I went by him on the right and leaned into the next curve, catching the sole of my boot on the process.  I didn't think I was that far over but it felt good to lean:-)

From Soco Gap, 19 winds its way down to Cherokee.  We started behind a slow car that caught up to a slower pickup truck but there was a brief spot where I was able to pass both of them, albeit on a solid line.  From there on down, there was no one ahead of us. Despite having cereal first thing, I was looking for a little more (preferably not fast food).  Entering Cherokee, we saw Granny's Kitchen and stopped.  Unfortunately, Granny doesn't open until 11:00 AM this time of year (except Saturday and Sunday).  It was only 10:20 so, with heavy hearts, we continued through town noting a number of other  closed establishments.  On to Bryson City.

The road isn't as twisty, although there are some curves, and it is definitely flatter.  As we hit the outskirts of Bryson City, we encountered a police checkpoint stopping cars going both ways.  There were a combination of deputies and troopers who wanted to see all the drivers' licences.  All the cruisers and hardware made me think of Arlo Guthrie at the "scene of the crime".  It looks like this is their way of conducting sobriety checks given the restrictions of state laws. 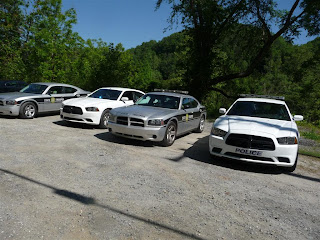 Continuing on, I checked the GPS for restaurants.  The Everett Diner looked good, a block off the highway in the downtown area.  It was not there but we found, in its place, the Iron Skillet.  We were seated and the couple in the next booth started a conversation.  They aren't from here, but not far away either, and they stop here every time they come to town. The gentleman spoke just like our friend TJ from Chattanooga, on of the most pleasant accents I have ever heard.


I didn't want too much food so the Scrambler Sandwich looked about right.  Scrambled egg with crumbled sausage mixed in topped with cheese on Texas Toast. I ordered a side of bacon and put that on the sandwich as well.  Sandy, asking about the cinnamon roll, was assured by Amanda the server that it wasn't too big.  Right. My sandwich was perfect.  I asked if they baked the bread but no, it comes from the store.  They toast it first, then put the butter on it and grill it.


On the way out, a much older gentleman came out to talk about the bike.  He had a plate on his truck that said Retired Air Force and told me he and his wife had a Kawasaki Voyager in the old days. A 1200, I asked?  No, he said, a 1300.  Wow.  That was a monster. 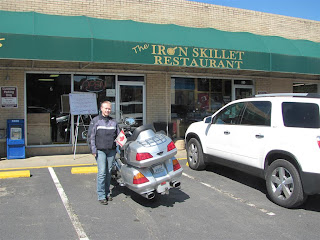 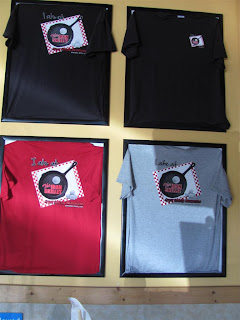 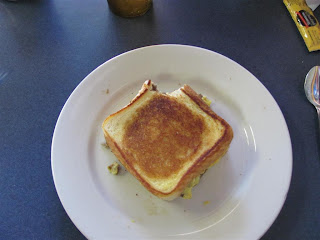 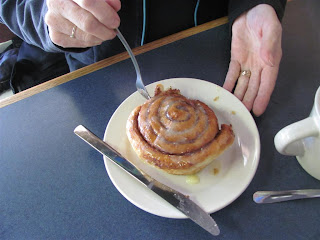 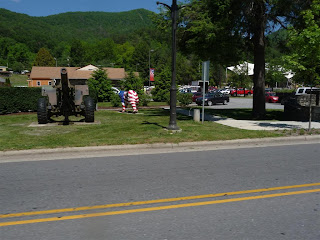 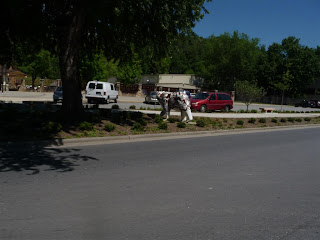 Another bear in Cherokee 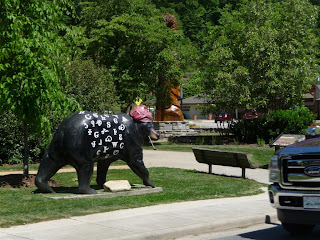 Really, these bears are all over the place

As we approached the BRP entrance, I got another bright idea.  We have never been to Gatlinburg, Tennessee because the highway up over Newfound Gap is usually jam packed with slow moving tourists.  There weren't many cars today so we continued on US 441 into the Great Smoky Mountains National Park, stopping at the National Park Oconaluftee Visitor Center. They had displays and exhibits describing the history and ecology of the park.  My National Park Passport was, unfortunately, back in the RV. so I will have to get it stamped later.


We headed up the road which, while winding, was mostly composed of sweepers.  For the longest way, there was no one ahead of us although we encountered a long line going the other way following a Hurricane Class A motorhome.  The smell of burning brakes was intense.  Eventually, we caught a line that was moving along about the 45 MPH speed limit, still a comfortable pace.  Then we caught another Hurricane just as we started the steep climb. I was pleasantly surprised when he pulled over at the first opportunity and let us by. 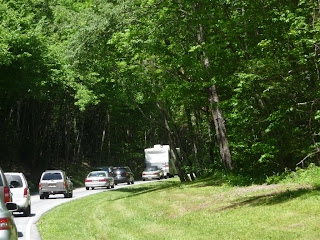 Hurricane motorhome on the upgrade 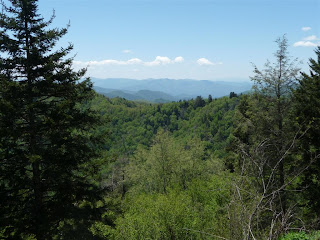 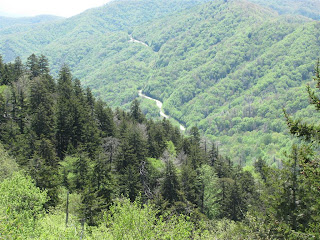 
The Tennessee side of the Gap is like a completely different road.  Tighter and more technical, the pavement leaves a lot to be desired in some spots. We were behind two Harley's following a line of cars that were going a little slower than I would have liked.  Still, it wasn't a bad ride.  I was thinking I didn't want to come back up this way if I was in slow traffic because of the Wing engine heat characteristics.  They even had something like the Pigtail Bridges on The Iron Mountain Road in the Black Hills, only this one was built of stone. 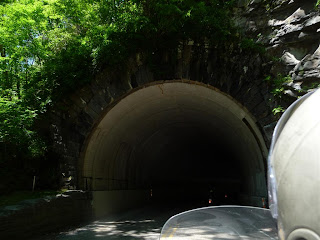 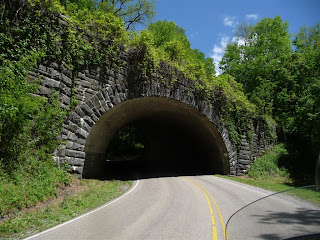 And a pigtail type bridge 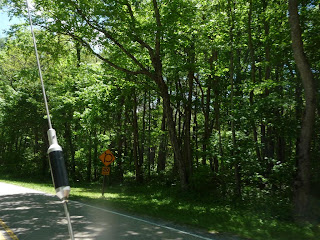 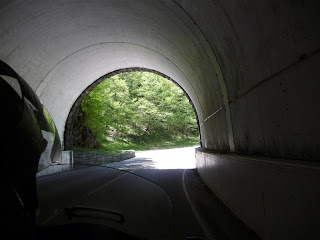 At the bottom, we stopped at the Sugarland Visitor Center.  I looked at the alternate routes for getting back to Waynesville. They both looked long so I decided to run back up over 441.  We got out just ahead of a few cars and I held the speed to 40 MPH, hoping not to catch up to anyone for as long as possible.  About 2/3rds of the way up, we caught a pickup truck but he was still doing a good pace.  Then we caught a slower SUV but he pulled over when the climb got really steep.  Then the truck did and we had a clear shot until we caught very slow cars about 1/2 mile from the top.  This was the first time the temperature gauge came up over half way.  Down the North Carolina side on perfect pavement, the line ahead of us moved at a respectable speed even if the lead car rode its brakes all the way down.  All in all, it was an excellent ride considering some of the horror stories I have heard from others. 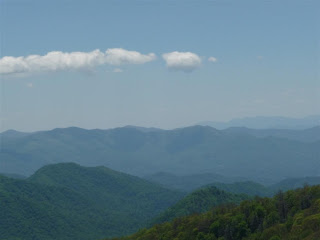 Where the Blue Ridge gets its name


In Cherokee, we continued down US 441 to US 74 and headed for Waynesville. 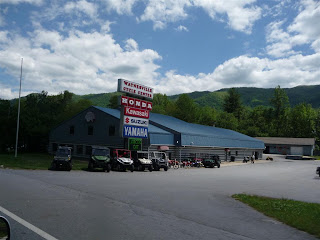 I found the Walmart in Waynesville with no trouble. In the jeans section, I checked out the Wranglers.  Relaxed fit versus regular fit?  The relaxed fit have a straight leg and a natural waist but are loose through the thigh and butt.  The regular fit have a straight leg and are tighter in the thigh and rear end but the waist is lower.  I wanted a regular with a higher waist but that was not to be.  As a compromise, I took one of each and bought a bale of socks as well.  Sandy bought some exercise pants, once pair long and one with shorter legs.


From Wally World, we went across town to Fat Buddies BBQ. I had brisket with sides of potato salad and coleslaw.  Sandy just had a half rack of ribs off the appetizer menu.  I ended up needing to get a box for some of my brisket.  They have a lot of older NASCAR items in here, seeming to favour Kevin Harvick. 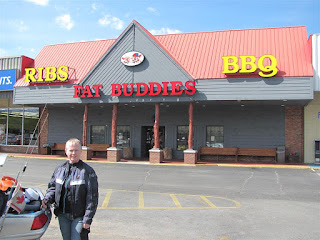 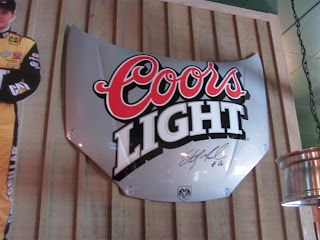 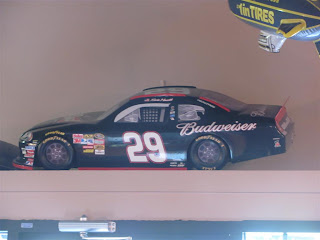 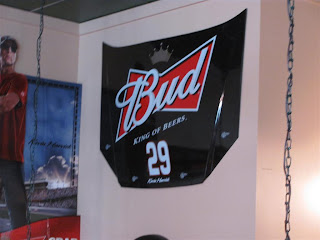 And more Harvick (Sandy was happy about Happy)


From Fat Buddies, we returned to the Applecover, getting gas along the way.  We spent much of the rest of the day visiting with Joan and Rembert, the nice folks who own the trailer next to our site.  They are from Leesville, SC, but this is their summer getaway.  Rembert gave us some tomatoes from Florida while I solved a problem with Joan's computer, which wasn't able to access any WiFi signals.  We talked for a long while.  Then I came in to watch the Nationwide race on TV while sorting blog photos and notes. We were in bed by 10:00 PM


This new Blogger interface has a few really annoying features and I am still trying to find the most efficient way of getting posts together.  There might not be one.