We slept much later than usual this morning.  I had complained yesterday about not getting to bed until 1:30 AM for two nights in a row and a 3:00 AM bedtime last night didn't help that.  By the time we were up, most had headed out on rides for the day but I was told by the boss that we weren't going anywhere, anyway.  We had breakfast in the RV while I sorted photos from yesterday and the we sat around visiting with the few people who were not out riding. 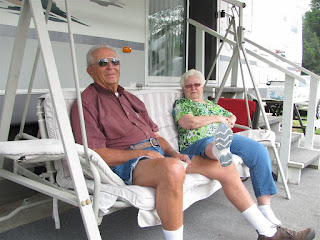 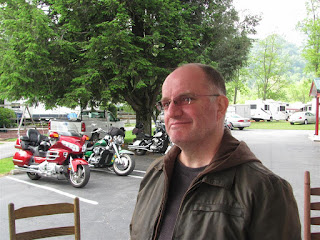 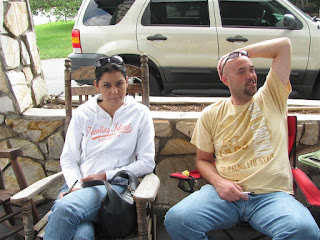 Around lunch time, Willie Wonka and Carlene joined us for a ride to a restaurant in Waynesville that our campground neighbor Joan told us about.  Bogart's was on Main Street just past the turn onto US 276 that goes up to the Parkway. Lucky Al joined us there after his successful search for a cord to connect his GPS/MP3 player to the GoldWing sound system.

We arrived after the rush hour crowd and were seated upstairs right away. I started with a soup and then had a rib-eye sandwich with the meat hanging off all sides of the large bun.  It was excellent and the price was reasonable.  I'm not sure why the usual food photos got missed. 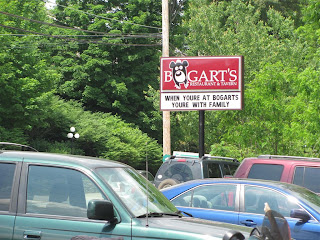 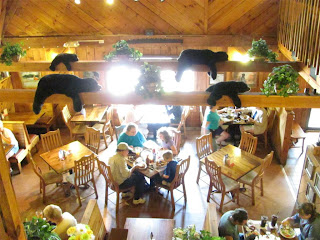 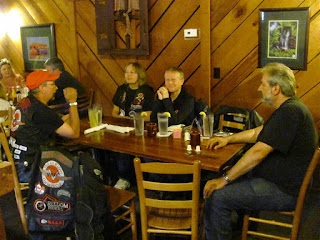 After lunch, we stopped at a Staples store to look for a mass storage device for Al.  Not finding what we wanted, I realized we could make do with what I had back at the RV. When we went outside, we found raindrops on the bikes.  We were lucky to get the shower during the ten minutes we were inside.  We then stopped for ice cream in Maggie Valley where I tried a Turtle sundae.  Again, no pictures.  Sorry about that. 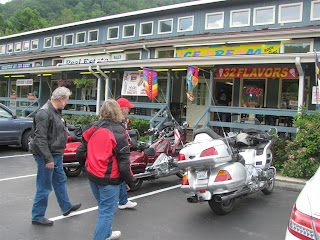 Ice cream stop - but not at this shop

Back at the Applecover, we gathered for the raffle draws.  Many great prizes donated by Kawasaki or the members were given out.  Sandy got a black and white Kawasaki shirt but traded it to Kudzu for a Betty Boop tote bag.  Six Pack won the 50/50 draw which saw over $400 donated to the Haywood County D.A.R.E. program represented, as usual, by Deputy Heidi.  Wompus won the coveted Bedpan Award due to his persevering through medical issues after a driver mistook his car for an unoccupied space.

The raffle was followed by a spaghetti dinner arranged by Derek and the Applecover.  The spread, served by Wonka and Carlene, was very tasty and filling.  I maneuvered to be at the head of the line but ended up taking the meal tickets and ate almost last. No problem because there was more than enough food. 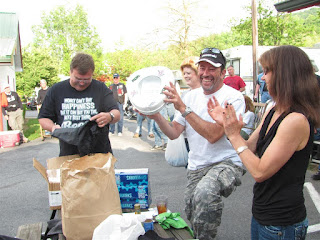 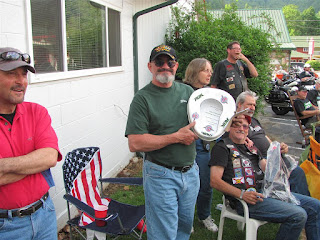 Wompus - the proud and deserving winner 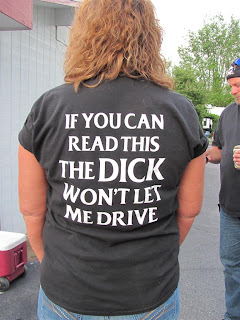 As usual, the mood was subdued on the last night of the gathering.  OK, mostly subdued.  We had a phone call from Sherm who is attending the Utah VROC event in Kanab.  Sandy went to bed fairly early but I stayed up until after midnight with a few hardcore people around the fire.  Kudzu's chair broke and he scuffed his elbow but got even by burning the chair. 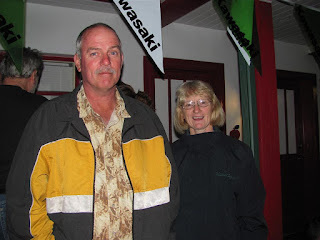 Butch and Teresa from Kentucky 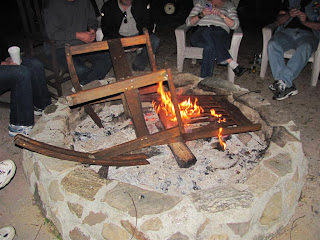 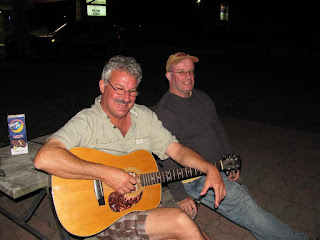 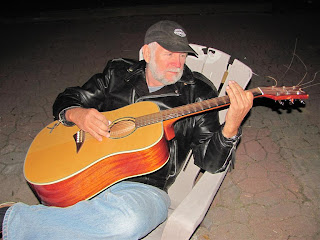 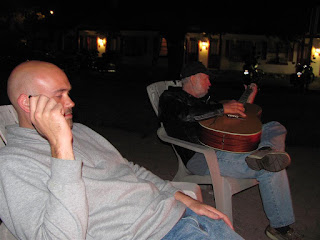 Flip nearing the end of the night 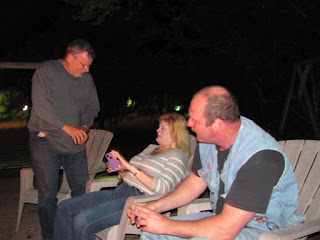 Finally, I called it quits and wandered off to bed leaving a small contingent still up.
Posted by Jim "Skid" Robinson on 5/19/2012