Back from breakfast and with camping bills paid, I disconnected the water, power and cable TV and stowed the hoses and cables.  Then I walked around the unit twice to be sure I hadn't forgotten anything because this was the first disconnection since last year.  It all looked good.  I managed to get out without clipping either the large tree stump to the right or the Class A to the left and we were rolling before 10:00 AM.

The final decision on route was made as I reached the US 19/US 276 intersection and kept rolling towards I-40 East.  Near Canton, I decided to stop for fuel at a Travel Center Of America where I found the exit despite trees covering the signs.  They really need to do some trimming.  When we got to the station, the BP across the street looked much more convenient so we stopped there instead. 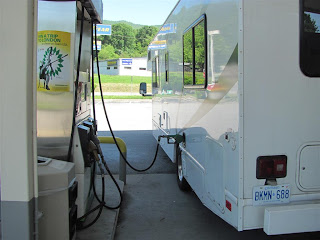 The least favourite part of owning a motorhome

Back on the road, we proceeded to Asheville where we took I-26 North over the mountains to the Tennessee line.  Climbing the North Carolina side, we were moving at  45 MPH and I passed some trucks that were doing about 15.  Down the other side, I had the cruise set at 50 MPH with the engine slowing us and the same trucks almost ran over us.  I am careful on the downgrades and look at the runaway truck ramps a whole other way now:-)

One thing I made a point to mention yesterday and forgot was the Vixen motorhome. I had never heard of one but Tom Miller mentioned it and Willie Wonka said he had seen one.  Imagine an RV that was 6' tall overall but had a roof that lifted so a 6'2" man could stand comfortably.  Imagine it had a turbo diesel and a manual transmission, allowing it to average 30 MPG but also exceed 100 MPH.  Imagine it was designed by  an engineer who had been instrumental in the development of the GTO, Grand Am and Delorean.  Imagine they made 578 pf them between 1986 and 1989, many of which are still in service, and then went out of business.  All I can conclude is that someone really screwed up. 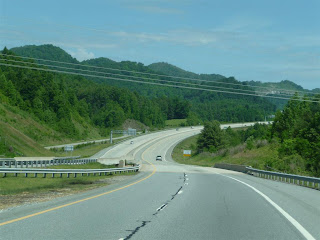 Rolling hills on I-26 in NC 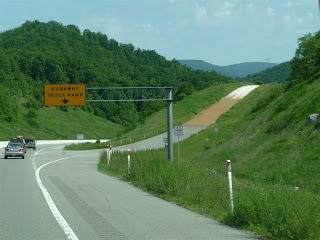 These are more important to me lately

In Johnson City, we stayed on I-26 all the way to I-81.  This was the most convenient route but it sure wasn't the shortest.  Next time, I will travel the hypotenuse.  We were slowed a bit in Marion, Virginia, where an overpass is down to one lane for repairs that will take all summer. When we got to Wytheville, I opted to top up with cheap Virginny gas which had been $3.51 per gallon on the way down.  We were pleasantly surprised to see it was now $3.37.

Leaving Virginia, we decided to head all the way to Erie, which would give us a short 400 mile hop to Sudbury tomorrow and get us home one day early.  This is why the motorhome has to go.  I like to drive a whole lot more than I can afford.  Still, driving it is fun and I am really going to miss it.  The GPS says Erie by 8:35 which, since we are the slowest thing on the Interstate Highway System, probably means 11:00. 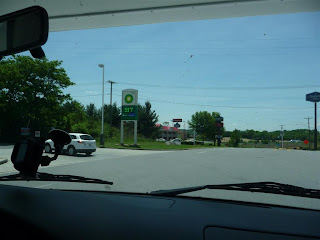 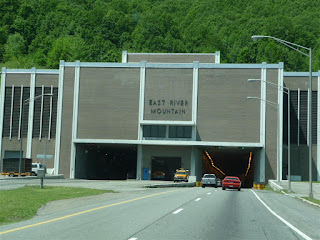 Gateway to West (By God) Virginia 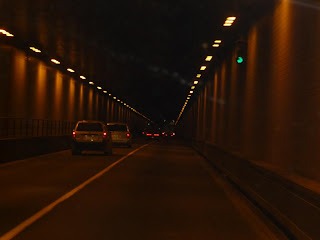 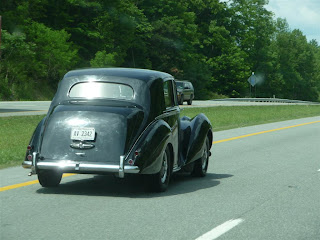 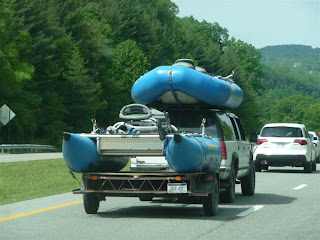 Rafting and kayaking are popular on the New River 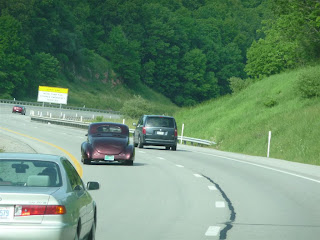 Hot rod on the winding hills of I-79 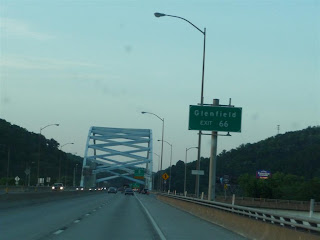 Bridge over the Ohio River near Pittsburgh Pa 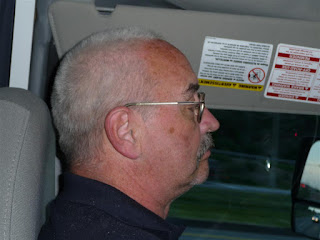 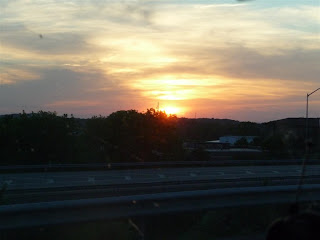 Sunset over the Alleghenies

Sandy made supper as we drove and, without incident, we rolled into the familiar Walmart lot in Erie just before 11:00 PM.  We had survived nasty construction south of Washington Pa and still gotten in before my estimated ETA.  We didn't stop for the Sheep and Fiber Festival near Waynesburg even though curiosity almost got the better of me.  Parked in the most level spot we could find, we took a walk around the store and then turned in for the night.
Posted by Jim "Skid" Robinson on 5/20/2012