There were no big trucks idling overnight so it was a peaceful sleep.  This morning was quite cool but I put on my shorts again anyway.  It had rained quite heavily overnight but there was no evidence of water in the trailer so maybe I got something right when I sealed the roof.  The water pump was still lagging but the TV antenna didn't clunk and, after cereal and coffee, were on the road by 7:20.  The first stretch always amuses me where we drive a few miles along I-81 North/I-77 South. We passed a Flying J with gas at $3.49/ lb just before the split where we followed 77 south.  Gotta love Virginia gas taxes, all right. 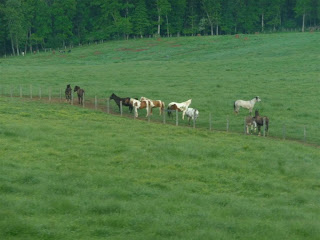 We passed Fancy Gap, where I-77 crosses the Blue Ridge Parkway.  Back in 1983, we exited the BRP here to take I-77 north to Roanoke with Sandy and the two year old twins all in the sidecar.  As we passed the little gas station on the access road, we saw a bus but thought nothing of it.  Later on, the bus caught up to us.  It was Alabama's tour coach on their way to play a concert.  We talked a bit on the CB radio and they were interested in how I had three people stuffed in the chair.  If we had stopped at the gas station, we could have met them but we had to settle for a photo of the bus.

I thought about following the Parkway to Maggie Valley but decided that a) the detour on US 221 would be nasty and b) we are headed for a Camping World in Statesville.  We started to seven mile downgrade to the North Carolina line while Sandy got a photo of a unique looking mountain sticking up out of the flat lands to the east. As long as I start the downgrade with the cruise set for 55 MPH or less and Tow/Haul mode engaged, the transmission will hold the speed by going all the way down to second gear with no brakes.  Still,  I look at the runaway truck ramps differently these days.  The weigh scales at the bottom of the hill had a sign that said "Truckers Check Brakes Before Entering Weigh Station".  I guess they don't like surprises like Scranton, Pa got:-)) 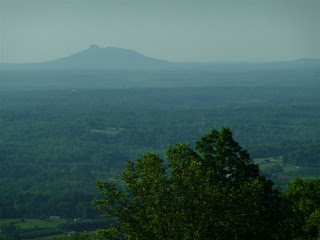 Any idea what this knob is called? 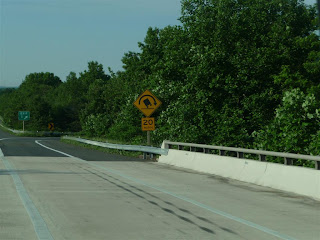 I pay close attention to these type of signs 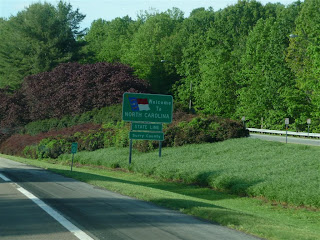 It flattens out at the state line 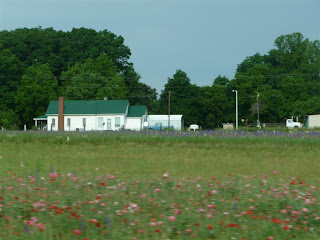 We continued down I-77 to Statesville where the Camping World was located at the on a dead end road with no signage at the main street.  Still, it was hopping.  This is the one we stopped at the November before last on our first trip with the RV when Leo and Diane were traveling with us.  I went in to the service desk and we talked about the pump.  They detailed Tim to check it out.  While  he had it in the shop, we went looking for other things. 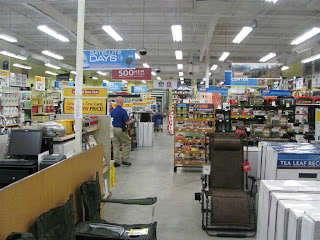 I bought tire pressure sensors to replace the one lost last year when the trailer tire disintegrated and the one that started reading strangely.  I also bought two more for spares and a battery powered signal booster for the monitoring system.  We also got another non-kink hose but were unable to find the cabinet latches we were looking for, the kind with two spring loaded nylon rollers and a tongue that locks between them. I decided maybe it was time to switch to magnets and got one to try out.  Then we adjourned to the waiting room until Tim came to tell us he had replaced the pump. Tim rides a Yamaha and we talked bikes a bit as he helped me reconnect the trailer. 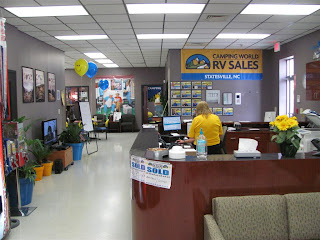 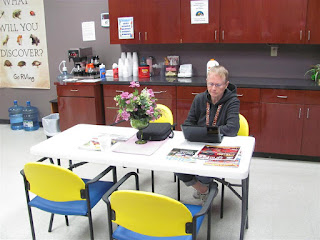 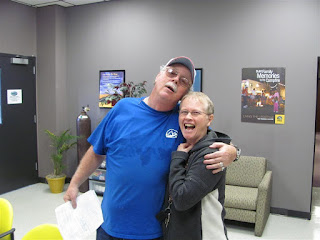 Leaving Camping World, we took US 70 diagonally across Statesville to I-40 West.  It occurred to me that if I just stayed on this road, we would eventually arrive in Kingman, Arizona where I think we have friends. But  our exit was only a couple of hours ahead.  I-40 was choppy for a ways out of Statesville although there was eventually new asphalt in the fast lane.  We stopped at a rest area for a lunch of noodles and another turkey Swiss sandwich..  On our way out, a prisoner transfer bus pulled up and the driver went to the Rest Room. As we went by the stopped bus, the passengers were staring out the barred windows reminding me of our last visit to the zoo.  Back on the highway, the bus eventually passed us.  On the eastbound side, they were paving and the highway, down to one lane, was dead stopped and backed up for quite a few miles. 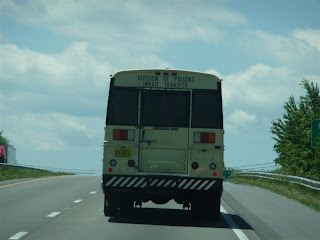 There is a bus line worse than Greyhound

Before Asheville, we made the long slow climb to the Eastern Continental Divide.  Although the summit is only just over 2,700 feet, this climb is as bad as anything I have seen on an Interstate out in the Rockies. In Asheville, we stopped at Walmart for some groceries.  This store is well hidden and doesn't allow overnight parking, according to the list Norm L. gave me (thanks, Norm). We hadn't planned to arrive in Maggie Valley until tomorrow but I called Derrick at the Applecover Inn and he said our space was empty so we kept going. 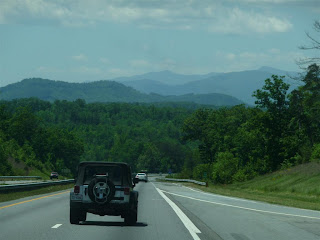 After maneuvering some narrow streets to get back on I-40, narrowly missing getting hit by a car driver who didn't grasp the meaning of a red light, we continued west to where we exited on US 74.  Then we followed US 19 right to The Applecover where Derrick was outside.  I was going to fuel up but the Maggie Valley gas prices were $3.79, just like everywhere except Virginia.  Maybe they will go down in the next ten days.  After getting aligned on the pad (Sandy is not very good at directing me), I hooked up.  Another word to the wise.  Don't leave your water pressure regulator in an unheated space for the winter when it has water in it.  The gauge wouldn't read but it did fill up with water.  Another casualty of "What was I thinking?". 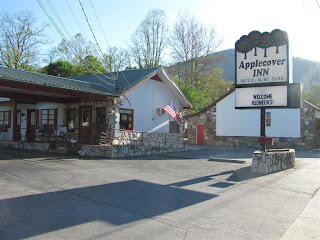 Were they expecting us? 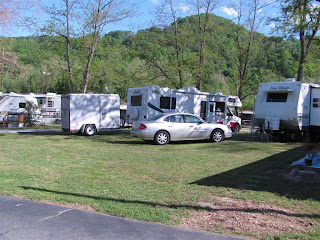 All set up at the Applecover

Supper time.  Blondy suggested on Facebook that we go across the street to Garlic Knots.  We had only been there once before.  It wasn't busy and we had meat lasagna.  It came with a garden salad and garlic bread and was more than enough to fill the void.  And it was tasty. 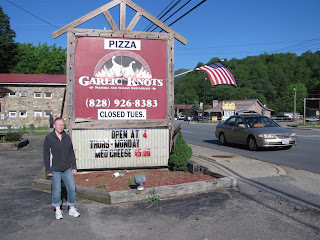 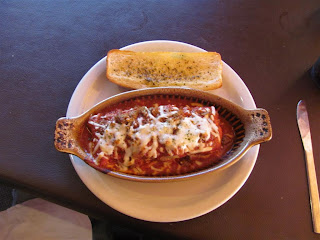 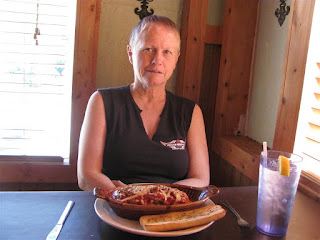 Sandy ready  to tuck in

After supper, we returned to the RV where I transcribed notes and downloaded photos for the blog while we waited for American Idol to come on.  As I expected, Hollie didn't make the cut but the little blonde English Texan girl did well enough, coming fourth out of thousands of people.  My money is on a final between Joshua and Jessica with no prediction as to who will win.

I would say that Sandy captured a picture of "Pilot Mountain" in North Carolina.