D Day.  Departure.  Finally.  I don't know why I was feeling so much inertia this spring but that is behind us now.

First thing, I went out and hooked the trailer up.  Lights worked.  Yahoo.  Then I loaded the bike, even remembering to put the antennae down first.  Gary L. dropped by with a Passport hard drive loaded with about 400 GB of music, movies and games.  I will be able to recover my lost MP3's and have other fun too.  Thank you Gary.  The last of my things didn't get organized.  Instead, I stuffed them in my carry bag with a promise to sort and store them on the road. 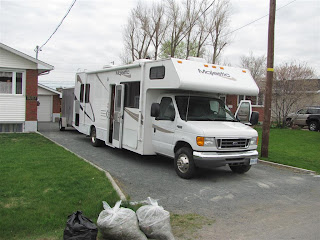 Ready to go at last


We were rolling by 8:30 under light overcast skies.  The rig was running nicely and I set the speed at 55 MPH to try to save fuel. Once we got to the two-lane, I started to collect a few vehicles behind us because one really doesn't want to do the speed limit on Highway 69.  I was looking forward to the southbound passing lane before the Killarney turnoff to let them by.  But there it was, gone.  They did this before the last stretch of four-lane opened.  Removed the passing lanes.  The only problem then was that the new road didn't open for months.  And  the new road here doesn't look near ready, either.  I wonder what is going on in the planners' heads?  If anything?

On the plus side, the hydro-seeded ground where they cleared the trees was looking very lush and park-like.  It made me think of parts of South Carolina except that we have a lot more rocks. 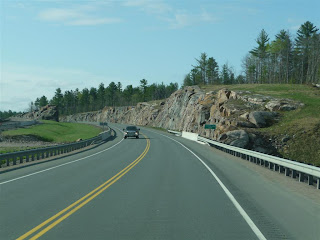 Near Harris Lake, we caught a Winnebago Class C from BC.  It was going slower than we were and, in this stretch, was down to 45 MPH.  That didn't stop it from wandering from centre line to rumble strip.  It was scary and I got by at the first opportunity. 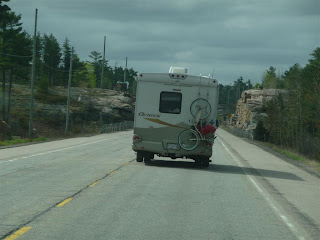 First, they went to the left 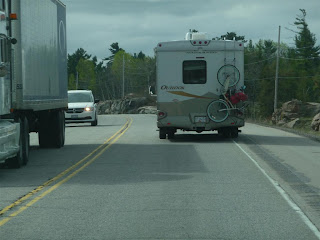 Then they went to the right

First, we stopped at the Tim Horton's at Horseshoe Lake Road south of Parry Sound where I picked up a sausage on a bun and hash brown potatoes along with a cappuccino to go.  Then, after cutting off Highway 400 at King Road, we stopped in a convoluted parking lot at the Rio Can Mall at Highways 27 and 7.  Finally, we followed 427 all the way to the start of the QEW.  It has been years  since I went this way.  Traffic was a little nuts but we got through OK.

We only saw a couple of police vehicles.  Too bad because I had absolutely no worries at the speed we were doing. 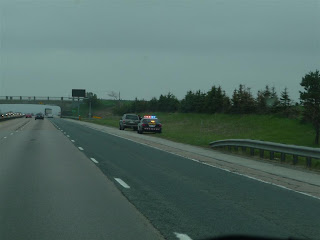 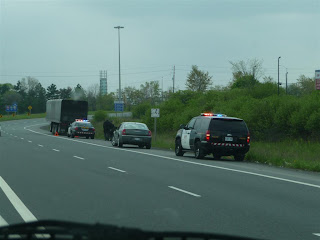 The border was backed up in the truck line but we sailed right through to the inspection booth.  Those of you who are new can read about the problems with both Homeland Security and a concrete abutment right here.  This year, there was no question about my identity.  The agent checked in the trailer and the motorhome and sent us on our way.  And I didn't hit anything. Contrary to popular opinion, I can learn from my mistakes.

We stopped at the Angola Service Center on the New York Thruway for a light bite to eat.  Then it was on to the Travel center of America on the eastern outskirts of Erie, where I ALMOST filled the tank with diesel.  Fortunately, the half wit I was operating on at the time noticed the pump didn't look right.  The slower speed helped because we got 9.4 MP(US)G, a good number for us.  We won't do this well tomorrow in the mountains of West (By God) Virginia.

Finally, we wheeled into the Walmart at the Peach Street exit in Erie.  I went to the far side of the lot where I managed to find a level space. We went in to get a few groceries and, when we came out, a trucker had managed to park right next to us.  Idling.  Damn.  New York has a law that a truck or bus can't idle for more then five minutes.  Pennsylvania and other states would do well to follow this example.

So Sandy prepared a light sandwich of turkey and Swiss on fresh ciabatta buns while I got the TV antenna up and located ABC (Dancing With The Stars).  Then I posted the bills from the day and worked on the blog because I don't want to be a day behind on the first day.  We managed to snag WiFi from the infamous Quaker Steak and Lube across the parking lot.

If tomorrow follows our normal pattern, we might be in Princeton WV tomorrow night.  Or not.  We'll see how it goes.  But it is good to finally be back on the road again.