Hills of Colour would be U-Turn's politically correct name for the Black Hills.

The Weather Channel showed rain in SW South Dakota over the roads we planned to travel. Pickstown didn’t have much to offer in the morning so we set out west on US 18. The first thing we had to do was cross the Fort Randall Dam. I hadn’t realized that this dam was built across the Missouri River but now I understand why the Missouri is so wide where I-90 crosses it up north at Chamberlain.

There was virtually no traffic as we moved along with the rising sun at our back. Deer alert was working but we only saw a couple out in the fields. In the small town of Burke (pop. 676), we stopped for gas at a small filling station/store. Since we hadn’t had our coffee yet, we poured some and sat down at on of two small tables they had. There was an older gentleman at the next table in a cowboy hat and plaid shirt and we got talking to him about weather, farming, the Black Hills and (of all things) Niagara Falls. This is one of the things I like about not rushing so much.

From Burke, we went on to Winner where they have an actual McDonalds. It was McGriddle time. I asked an older man at the next table if he knew how Winner got its name but he said he didn’t know. He was joined by another man and asked him. It seems there were two towns near each other. The railway picked one of them when it was laying out its route west and that one was called the Winner. The other one disappeared.

Outside Winner, I was flipping between two channels on the weather band radio. The station in South Dakota was saying how SD rainfall to-date was way below normal while the Nebraska station was reporting much higher than usual precipitation. On average, I guess they average out but that wasn’t helping the farmers.

There was going to be a detour west of Winner since they had closed US 18 for road work. We would be sent up US 183, across SD 44 and back down US 83. There was a decision to be made, however, based on the weather. Ahead to the southwest, the rain we saw on the morning Doppler appeared to still be falling. If we continued with the original plan of approaching Custer from the south, we could very well get wet. I hate wet. At the crossroads of Wite River, we changed the plan and stuck on SD 44 to the little town of Interior which is the south entrance to the Badlands National Park. 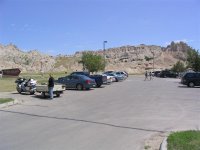 We entered the park using our National Parks Pass. After a quick stop at the Visitor’s Center to get the Passport book stamped, we set out up the 29 mile scenic road that twists and winds through the pretty colours of the eroded landscape. We stopped at several of the lookouts. At one, a ranger was going back to his truck with a snake stick. I asked what he had done with the snake and he said he had thrown it over the edge. Apparently, up to this year, there have only been four snake bites in the history of the park. This year, so far, there have been 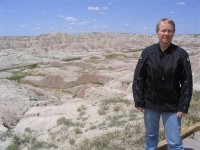 two so they are being careful. At another, we had a long talk with a gentleman from Colorado who, along with his wife, was taking his grandchildren on a vacation. We also spent some time talking to some riders returning to Illinois after a tour of Wyoming. They were very interested in the trailer.

It was very hot and dry in the Badlands. We finished the road and cut up to I-90 at Wall. Although the $0.05 coffee was tempting, we skipped the infamous Wall Drug and headed for Rapid City on I-90. The road was down to single lane for a ways as they are upgrading the pavement. Near Rapid City, we passed Ellsworth Airforce Base where two B-1 Lancer bombers were practicing touch and go. In the old days, we used to see B-52’s here but times have changed. They were elegant looking aircraft and watching the low level maneuvering was interesting.

We skipped downtown Rapid City by taking the Truck 16 route around town. As we connected with US 16 south of town, we could see a large black cloud hanging over the Black Hills. It looked to me like it might be right over Custer. We raced down 16 past the entrance to Mount Rushmore and on, through some road construction, to Hill City. Custer was only a few miles but the black cloud was right in front of us. I suggested rain gear but Sandy’s response was negative so, in a fit of stupidity, I didn’t stop. Just as we got far enough that we couldn’t pull over, it started. As I rode along in my mesh jacket with no gloves feeling the cold rain chill me, Sandy and I had a talk about life, the Universe and everything. Bottom line was that I would not take weather advice from here ever again.

Arriving in Custer, I wasn’t sure where the Rock Crest Lodge, center of activities and our home for the next three nights, was. I made a lucky guess at an intersection and we rode straight to it. Many VROCers had already arrived so hugs, greetings and introductions were exchanged as we got checked in. No WiFi, so we would be out of touch. We went across the road to the restaurant at the Dakota Cowboy Inn with Auggie and Sue, our good friends from Iowa, for supper. I saw a thing called a Buffalo Hongo on the menu. It was ½ pound of ground buffalo 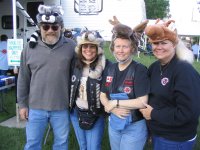 covered with brwn gravy and wine soaked mushrooms along with fries. Since I had never had anything like it, I gave it a try. Sandy stuck wth Chicken Parmesan.

People at the Rock Crest started kicking back and Piper, our resident vendor, put out the merchandise. New items included strange hats.

It was strange that our friend Sherm, convalescing at home from 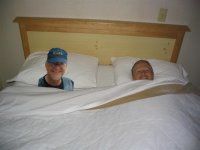 the recent accident, was not only there in spirit, but also seemed to keep appearing in photos. Based on these, I think he was having a lot of fun. John Hanneman, another VROC Winger, phoned him and a lot of people got to say Hi. Sherm’s absence was the only dark spot on an otherwise perfect evening.

Sandy turned in early while I stayed up a while to visit. Eventually, the days caught up with me and I toddled off as well.
Posted by Jim "Skid" Robinson on 6/22/2006