There wasn’t a cloud in the sky at the Brattleboro KOA this morning. That was a new experience given how the last few days have gone.

After tearing down, I asked a KOA person if the little road on the map that led over to Vermont 30 was passable. He said it was but to be sure to take the left fork when the road ended and watch out for the wooden decking on the covered bridge. It was a good thing I asked because the road, which resembled a paved goat path loaded with cars taking a shortcut to work, had no signs of any kind. It ended three times and I turned left ever time. Amazingly, that got us to 30.

We took 30 north to Jamaica where we turned on Vermont 100 north. This is billed as one of the top scenic highways in the US. The trees before Jamaica had an open and orderly air, but when we started up 100 they became closer and more intense. The whole feel was rustic in a very pretty way with old houses and farms, well appointed small businesses and stretches of trees as the road wound around up and down over the hills. It soon became apparent that most of the eating establishments, and there were some nice ones, only served lunch and/or dinner. We were getting hungry. 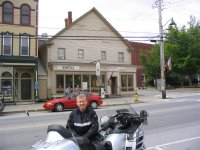 When we got to the little town of Ludlow, we found an open restaurant called The Hatchery on the main street. They served Sandy a huge mess of blueberry pancakes. This was their “short” stack. I had what appears to be a Vermont thing. Eggs and Polish sausage. There was more than enough.

After leaving, we noticed some wildly coloured llama sculptures in front of various buildings. The Ludlow Llamas. It seems people buy these things, paint them up and auction them off at the end of 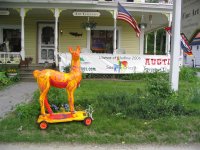 the year with the proceeds going to charity. They are on wheels and last week they had a llama parade. We would never have seen them except, in my GPS challenged manner, I accidentally headed through and out of town on 103 South. Just call me Wrong Way Robinson.

My sense of direction failed me again leaving town on the right road when I missed the 100 North turnoff and we ended up going into Rutland on 103. 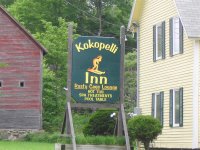 While in Rutland, we stopped at a Walgreens for a few supplies. Another Wing rider there asked us how we liked breakfast in Ludlow. Seems he saw our bike as he rode through town. A Ludlow local, I may have convinced him to forget Quebec and come sledding in Sudbury. Outside Killington, we found that Kokopelli has been seen in New England. Note the ski’s on his feet, Sherm:-) 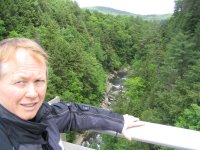 From Rutland, we headed east on US 4 and stopped to see the Queechee Gorge. We walked the road bridge over the gorge but it was hard to get Sandy close enough to the railing to get a good picture. Then we stopped at the Visitor Center and had a nice talk with a local lady working the counter. They will be having a hot air balloon festival here in a few weeks. That should be a sight.

I need to make a comment here on Vermont drivers. They were the most polite I have ever seen. Three different times, a driver stopped and motioned me to go ahead when I was pulling out of somewhere. I also saw three New York drivers and every on of them was totally without a clue. Go figure. 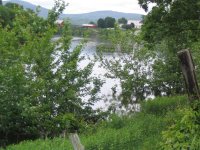 From Queechee, we went east and caught US 5 up the Vermont side of the Connecticut River. The river is overflowing its banks as you can see if you look at the picture carefully. There is also a lot of water standing in the fields so the ground must be totally saturated from the continued rain. Highway 5 is a fine road, very nice curves and great scenery. 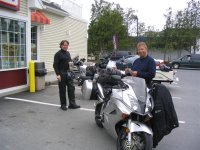 At Woodsville, we turned right on US 302 and crossed over into Vermont. We needed a break so we pulled in at a Dunkin Donuts. There were two Ontario bikes there. Both riders owned Independent Grocers, one in Huntsville and the other, of all places, in Espanola (about 40 miles from Sudbury). Small world. They were Laconia bound by a different route. In the DD, we were about to order when the power went off. This is a real problem in a place that depends on electricity for everything. Luckily, it came back on in time for us to get our coffee. 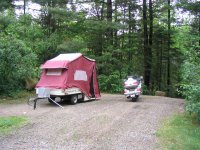 We continued twisting and winding along 302 until we reached Twin Mountain, where we looked up the KOA. We wrangled over sites and the staff were extremely accommodating. We finally got set up and met Bob and Cindy, from Dartmouth Nova Scotia. They are here for their first Laconia. We chatted a bit and then Sandy and I went down the road about seven miles to find supper. Clouds had been building all day and it was now spitting a bit of rain on us. 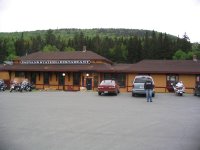 Fabyan’s is a restaurant made from a converted railway station. It is located on 302 at the turnoff to the Mt. Washington Cog Railway. Good food, better service. The many Harley riders there ignored us, so we returned the favour. Sandy has a sweet and sour chicken concoction and I had a bacon/turkey melt that was superb. We skipped dessert. 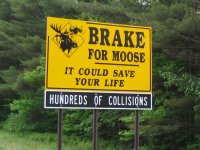 On the way back, we saw this sign. It made me ask myself just who in their right mind would not brake for a moose. Where I come from, this would be so obvious that I would think it went without saying, but in New Hampshire, they seem to need signs.

Back in the campground, we stopped and visited Mort and Elaine from Hershey, Pa. They have a home built cargo trailer made from aluminum diamond plate. It has a solar panel to charge a 12 volt battery in the trailer that runs an inverter for 110 power. When we came back to our site, I was surprised to see that all the clouds had suddenly cleared. Sandy went to take a shower and I gave a tour of the camper to yet another riding couple.

As the sun went down, I sat at the picnic table to update the blog. We called a friend, Jerry Gagnon, in Berlin and made arrangements to drop by his camp for a visit tomorrow morning. The heater is running in the camper and I expect we will have a comfortable night.
Posted by Jim "Skid" Robinson on 6/12/2006