Before I get to today, I should make mention of the supper and the company last night. The VROC crew grew some (or was that gruesome) and we had a fine time. It was especially nice to see Wild Rose and her other half since it has been a few years.

In addition Joe and Pat, a non-VROC father and son from the Hamilton/Burlington area of Ontario were staying at KSL. Joe is retired from Stelco and Pat and his wife (at home) both work in television. His wife actually has something to do with the production of Corner Gas.

Fred was some put out to find that a group of HD riders had gotten rocks from the creek and built their own fire pit on his grass. All this while only about fifty feet from the excellent fire pit and benches he had constructed, where everyone else was. It is hard to figure some people's children.

Sandy and I went to bed early. We awoke early too, but looked at the fog bank and went back to bed for a while. When we finally got up, tear-down was slow because we both spent a lot of time chatting with whoever came by. Coyote finally figured that I might never leave but we did pull out soon after. The departure was not as stylish as I would have liked because, as I was pulling out onto Highway 28, I had to dodge a large dead possum on the centreline right in front of the driveway.

After we got going, we cruised down the now very familiar Highway 74 to Waynesville where we just made Mickey's for breakfast. When I climbed on to leave, my right foot slipped in a patch of oil and I bashed my shin on the engine guard. It looks like I will have to rededicate myself to not using bad words since I fell of the wagon here for a bit:-) 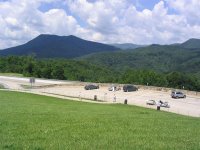 There was a quick shot across I-40 to Asheville and the north on I-26 to Tennessee. We stopped at a scenic lookout on the Tennessee side that we hadn't visited before. A group of mostly Harleys pulled in and one rider came over to us. His name was Sy Desloges and he was raised in Coniston (now part of Sudbury). We had some common friends, once again proving that it is a small world. Sy has been living in Asheville for 18 years and does not envisage ever moving back to the land of ice and snow. 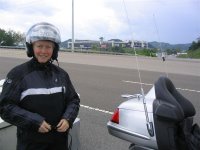 We left I-26 in Johnson City and took the road over to Bristol Motor Speedway. As we rode along,we watched the sky turn from cloudy to menacing. At BMS, it was time to put on the rain gear.You can see the Speedway over Sandy's shoulder in this shot.

The gear was a good idea. My last minute decision to skip the usual route because the rain looked centred over it was not. I elected to try a more direct route to I-81 right through Bristol. That took us to a detour and right into the second rain storm which had snuck up behind us. Soon we were wet but on I-81 heading northeast.

For some reason, we were both exceptionally tired despite having gone to bed early and not really having ridden anywhere. After a quick conference, we decided to live in the lap of luxury and get a motel room for the night. First attempt was in Marion Va, but it seems the town closes down on Sundays. We continued on to Wytheville with another ugly rain cloud threatening from the north. It only grazed us as we found a Ramada here with parking at the room and WiFi.

We had supper in the adjoining Country Kitchen which was empty except for us. Then we went back to our room where Sandy hit the hay while I caught up on the VROC newsgroup and downloaded the mail. When this Blog is posted, I will sack out too.

Tomorrow we will wander up through the Shenandoah Valley and see what we can see. Probably the Skyline Drive and Luray Caverns. Maybe a few other things if we have time.
Posted by Jim "Skid" Robinson on 6/04/2006