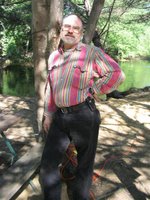 When I got up, I had the opportunity to meet the elusive Ferris Leets for the first time. Ferris’ real name is Lee Denman but he got his nickname when the computer he used to first post to VROC had Ferris Leets in the ‘From’ line. Once posted, he was forced to keep it. Lee has a fine green 1999 Nomad.

We had breakfast at the Circle again but this time opted for something less filling. I opted for fruit covered pancakes and Sandy had raisin toast and bacon.

We had 58 bikes for the poker run. Since the radios had proved so useful yesterday, we opted to use them again. Joe went first and I rode second with Jersey at the back. Jersey was in the rear but, unfortunately, he didn’t have a large antenna and his signal couldn’t reach the front of the group. Luckily, Mark was on a GL1500 in the middle of the group and relayed.

The ride went well. At each intersection, the bikes right behind us stopped and blocked traffic and then fell in at the back. The checkpoint in the middle of the run was in Rochester at a mall. It was so hot that the sidestand on Quicksilver sank into the asphalt. Luckily, some alert VROCers caught it and held it until I could be found. 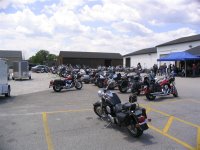 The run ended at Hooksett Kawasaki where demo rides and discounts were the order of the day. Sandy and I wandered around a bit and then rode back to Epsom with Ron from Vermont. We stopped at the McDonalds at the Epsom traffic circle to see if there was a WiFi signal. Unfortunately, I had left the computer at camp so we went up to Lazy River, got it and returned. No WiFi, so we had milkshakes and returned to camp.

Jersey Dave had bought a lightbar and was installing it. He looked done at one point but then I saw him taking it apart again. I asked why and he told me the headlight wouldn’t come on when he turned on the key. I ad to remind him that the Kaw is unusual in that the headlight will not come on until the bike is STARTED. Sure enough, the wiring was fine.

We took a few moments in the field to cut my hair using Dave’s power cord for the clippers. After two weeks, it was getting way too long. 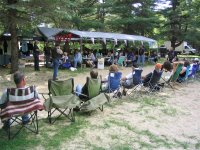 Joe runs a CLAP (Chrome, Leather & Performance) raffle every year. This year there was over $10,000 worth of prizes. We were only slightly lucky as Emily, Lost Bob’s daughter, pulled one of our tickets and Sandy won some expensive sunglasses. Two members with casts on their foot won everything in sight. Karma, I guess.

The catered supper consisted of pork, beans and salads. It was very good, as usual. 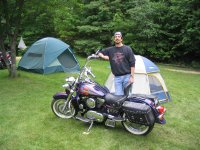 After supper, I spent some time talking to Jeff Hirsch VROC #100. Jeff was around at the beginning but now he only attends Laconia once in a while. I was brought him up to date on some of the things that have happened as we grew.
There were some burnouts but not much. Sandy went to bed about 9:00 while Ron Russell and I talked politics and work until midnight.
Posted by Jim "Skid" Robinson on 6/16/2006