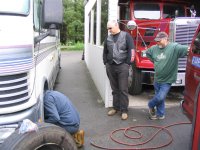 We awoke to the sound of rain on the roof. Fred came by and said they had delivered the ball joint to the wrong place but he was on a mission to go and pick it up. Before too long, he was back and the mechanic, under expert Freedom Rider supervision, was installing it and replacing the brake pads that had disintegrated when the pulled to assembly apart. In short order, we were mobile again and made our way back to Hearthstone Park.

After getting the RV situated, we fired up the bikes and rode to Warrensburg, just north of Lake George. Terry led, we were second, Ray Albert was 3rd, Gord & Shirley 4th and Barry (from Beeton Ont on a Cavalcade) brought up the rear. There were a number of vendors set up here. I picked up a replacement Butler Mug (a 20 oz mug that fits in a holder on the handlebars) to replace the one that had been leaking around the lid. I also got some Kuryakyn cruising pegs to replace the switchblade pegs on the Wing. One lady did have Tour King motorcycle covers in stock, which dismayed me a bit since I had finally broken down and ordered one just before I left Sudbury. We grabbed some pizza slices and then went for a scenic ride.

From Warrensburg, we took a side road back to the lake and Highway 9N. Most of the highways around here are variations on 9. I have never figured this out. The road was gravel for a ways in the middle, but we got back on pavement before too long. Just before we got to 9N, we descended a steep grade and could smell burning brakes. Soon we caught the culprit, a car towing a medium sized house trailer. I guess he didn’t know about using a lower gear. 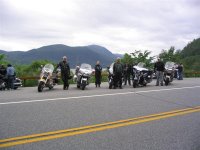 At 9N, we turned north and rode up through Bolton Landing at a leisurely pace since Terry was scuffing in a new rear tire. It was nice riding behind him since I can pretty well anticipate his every move from the years we traveled extensively together. We stopped at a scenic lookout and got the Freedom Riders official Americade photo. The Vulcans and a Sporty pulled in. They were part of the silent VROC majority, reading but not posting. There was Phil and his son Phil from Long Island and Tim (probably from the same place). I don’t recall the HD rider’s name. Their 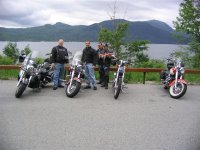 photo is the second one. [Since my memory is shot, Bill Grimes Sr. corrected me on the names. With him and Bill Jr. ar Tim on the Drifter (got that one right) and his son-in-law Bryan on the HD. Sorry about that, Bill.]
We continued along the lake until we came to the northern end and pulled into the lot at Fort Ticonderoga. Because we were short of time, we didn’t pay the $12 to tour the fort, but did grab a coffee in the restaurant and checked out the gift shop.

The return trip was down the east side of the lake on Highway 22. When we connected with Highway 4 at Whitehall (home of the US Navy) things became familiar since I use this route coming home from Laconia. At Fort Ann, we turned west on 143 and the threatening skies dumped a little rain on us.

Back at Highway 9, we turned north towards Lake George Village. There was a brief stop at Frontier Town where more vendors were set up but nothing caught our fancy. When we entered the village, right in front of our old home at Thompson’s Garage, there was a police checkpoint with six cars in the median and another half dozen in the HoJo’s parking lot. It seems that the operation to deal with loud pipes was well underway. They waved us right through.

Some friends of Gord and Shirley’s from Pennsylvania showed up when we got back to the campground. We sat and talked with them for quite a while. After they left, we cooked up some bratwurst, sausages and odds and ends for supper. After the late night at Fred’s, everyone turned in early.

Lucky Al and Tony The Kid, VROC from Jersey, are in town. I’ve talked to Al several times on the phone but we haven’t been able to connect yet.
Posted by Jim "Skid" Robinson on 6/08/2006