The weather was OK in the morning at Horseheads. Rather than take the Interstate, we turned on 417 at Corning and headed for Olean on the two-lane road. It was a pleasant ride until the rain started spitting so we put on the rain suits. There were no Mickey D’s so we stopped at a Dunkin Donuts in a little town and had their breakfast sandwiches. Sandy didn’t like it but I did. I guess I won’t be getting any more DD……

The rain started to get serious while we were inside. We met two older couples on Voyagers returning from Laconia. One was almost home but their partners were heading into Ohio. Called the bank and the fellow I spoke to said he would get things straightened out.

We headed on in the increasing rain to Olean where the skies opened up. A frog would have drowned in that rain. There was a WalMart so I stopped to ask about tires. They had the size but they were only two-ply. Darcia, the tire manager, called around and couldn’t find any so she sent us down the road to Jamestown to a trailer place.

The rain stopped by the time we got to Jamestown on the superslab. The trailer place didn’t have any either, but the called around town for us. This also came up empty so they suggested Erie. On we went on I-86 and then I-90. I stopped in town at a full service garage and asked them who would have tires. They sent us to Firestone downtown, who had none, but Josh the tire manager called and found a Firestone place on the outskirts had eight of them. I was impressed by the effort these people put out even when there was no way we would be buying from them. 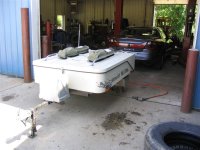 After arriving at Mark’s Tire Service on West Lake Drive, they got right on it and had both tires installed in no time flat. While we were waiting, I realized our day was going a lot slower than planned and that we would probably only get to Cleveland that night. I called Jan Hooks, who lives in Vermilion between Cleveland and Sandusky to see if they had room to put us up. She said to come on down and gave me directions.

With the tires on, we thanked all the 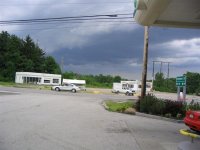 staff at Mark’s and got up on I-90 for the run to Vermilion. All was well until Painesville Ohio, where we were faced with another looming storm ahead of us. We got gas and put the suits on. Again. A short burst of heavy wind caused me to move the bike to the lee side of the station. After it looked like it had passed, we headed back out and, from the perspective of the road, saw the second storm looked worse. The clouds had a decidedly green tinge to them. As the rain started pouring down and lightning was crashing around us, we rode into a single lane construction zone. Luckily, we got through it in about 15 miles and the roads were drying by the time we got to Cleveland. 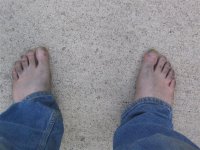 Cleveland at rush hour is only slightly better than Pittsburgh. We inched along through the S-bends, but things started picking up as we went past Jacobs Field. From there, it started flowing and we highballed it to Chez Hooks. I found after getting my boots off that the new socks weren’t quite colourfast.

We garaged the bike and trailer in Rob’s other garage. He has two of them. After a drink and some visiting, we sat down to a fine supper of chicken, corn on the cob and potato salad. We looked at 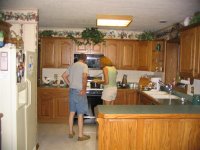 some pictures of their recent European cruise, had another drink and then called it a night.

Many thanks to Rob and Jan for the hospitality. It was good to see you again.
Posted by Jim "Skid" Robinson on 6/19/2006