Today started fairly cool but at least it wasn't raining. Terry had to head for home but he didn't start as early as he originally planned. After Terry was gone, we relocated the RV to our new location. This one would prove to be much more peaceful since it was away from the highway and the incessant loud pipes roaring by.
After we got situated, we decided to go for a ride. Gord and Shirley's Pennsylvania friends had given us a copy of the official Americade self guided tour map. We chose the run to Saratoga Springs and suited up. This was the point at which Gord realized that the cable provided with his new helmet with the embedded headset wouldn't fit the HD. The trip got deferred in favour of returning to the Tour Expo and solving the dilemma.
Downtown Lake George was a congested mess. Rather than try to find parking for two bikes at te Expo, I told Gord I'd wait for him at Fred Thompson's Garage. This took us out of the ratrace. Imagine my surprise when one of the guys at Fred's told me that the restaurant next door had WiFi. I couldn't hit it from the office, but using a flatbed trailer on that side of the lot and putting my jacket over both my head and the computer. It looked silly but I got a few Blog updates done.
Gord showed up while I was doing this and made fun of me. Imagine that. Anyway, he managed to get his cord problem fixed and we headed out on the self guided tour with me in the lead. We took Highway 9N south past the rally headquarters at Roaring Brook Ranch and on to Lake Luzerne where we had stayed back in 1983. Somewhere in there I missed a turn, but the wrong road ended up the same place as the right one so no harm done:-)
The road wound up and down, back and forth until we reached the outskirts of Saratoga Springs where we stopped at a little roadside diner for lunch. Talk about a difference from the high priced disappointment the night before. Sandwiches piled high with meat, fries with a unique flavour, fresh bread, tasty soup. They even brought Gord more fires because "they didn't give him enough the first time". 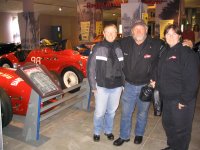 The next stop was the Saratoga Automobile Museum. They have a small but interesting display of classic and historical automobiles. Many belong to a man named Taylor of Taylor Made golf club fame. The current selection was mainly Jaguar with some Aston Martin and others. Upsatirs, cars from as far back as 1903 were on display. They also had one of Darryl Waltrip's 1985 stock cars.
From Saratoga, we wandered east on 29 and then north on 4 eventually getting on 9L which runs up and then comes south on the east shore of Lake George. We caught a few showers and the lake was very angry when we got to it. We wound our way back into town where we discovered major gridlock in the direction we wanted to go. Not to be deterred, we headed south, jumped on I-87 and went around the problem.
We picked up a pie and a few things at Ray's Deli and Shirley did wonders whipping up a fine supper out of leftover odds an ends. The woman is honestly a marvel.
After supper, we started a fire to burn what was left of Ray's crew's firewood. Down the hill I saw a Fibco camper trailer identical to the one I bought in 1988 and wrecked in 1997. I wandered down and met Wayne, the owner. He has been hauling it behind a GL-1500 for a decade but hasn't been able to find an awning or add-a-room for it since the company is long out of business. I gave an awning and a screen porch to a friend years ago. This friend no longer rides so I told Wayne I'd see if I could find out what happened to them.
After returning to our site, the crew all turned in early since tomorrow is pack up and leave day.
Posted by Jim "Skid" Robinson on 6/10/2006