We were up and packed early. We had coffee, courtesy of the ever-reliable Donk, and did a tour of the campground saying goodbye. Many will be at the Sudbury Inn in Bethel Maine in September so we’ll see them soon. The weather, barring the first day, was spectacular. Thanks to Ol' Phart Joe, U-Turn, Bobcat, Donk and all the rest of the NEVROC crew who made this athering possible.

We took Highway 9 through Concord and followed it over the mountains through Brattleboro and Bennington Vermont. It was another scorcher. We then followed NY 7 to Troy. We did not encounter one McDonalds before the 10:30 end of breakfast, so we settled for a Dunkin’ Donuts sandwich in Schenectady. The temperature was 33C. 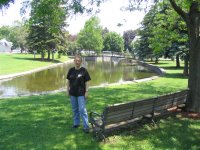 We jumped on I-88 to Binghampton but I was feeling very tired so we stopped in a park in the town of Cobleskill (pictured), a rest area and also in Apalachin for a drink and apple pie at McDonalds. At the McD’s, we saw all manner of classic cars leaving so I guess they have the equivalent of our cruise night back home. In Apalachin, I also recalled the ill-fated mob meeting in 1957 referred to as the Apalachin Conference.

We called it quits at a Knight’s Inn in Horseheads, NY. The town of Horseheads, part of Elmira, got its name when Revolutionary soldiers slaughtered their starving horses for food and left the heads for carrion. My uncle and his family lived in this rea before relocating to southern Pennsylvania.

We had a secure Internet connection so I checked my bank account for some money that I had arranged for. It wasn’t in the right place so I noted the info to call the bank in the morning. I also noted that the trailer tires were lacking in tread. I hadn’t been watching them, but I guess 25,000 miles is all they will do. I planned to update the Blog, but just vegged out instead.
Posted by Jim "Skid" Robinson on 6/18/2006