Two years ago, we took a ride with a group to the Nubble Lighthouse in York, Maine. It was a fine ride but, when we got there, the lighthouse was totally invisible due to fog. Today, we set out to try to repeat the experience, sans fog.

Joe led again, with blockers functioning. We had only one CB bike, but the group was smaller than the poker run so it wasn’t a concern. We took out turn blocking. Kudos go to Ron Russell, who blocked a traffic circle on Highway 1 with his LT. I thought it was a brave and suicidal move but, other than some horns blown, he survived intact. 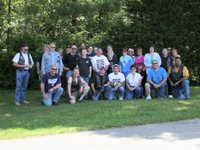 Our first stop was Fort McClary. We didn’t tour the fort but we did get a group photo courtesy of Ron. I think we were a fine looking group of people.

The ride to York involved a winding little coast road. Ron made the mistake two years ago of asking EZ and Scooter what they thought of the ‘twisties’. Compared to the southern roads these two run, this was a straight road, but it was fun. At York, the sun was out and bright so we got to see the beaches crowded with people enjoying the fine weather. 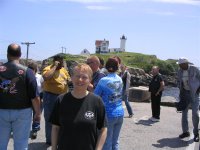 We found room in the lighthouse parking lot and there it was. The Lighthouse. After admiring it for a while, the group split up. Bobcat took some to a mall for shopping and food. Joe led the rest of us home. Unfortunately, he made a wrong turn and took us through downtown Portsmouth, NH. This is a quaint place and I’d like to visit again, but it was hot and crowded.

On the way out of town, we were in the left lane. Ahead, the right lane was blocked by a tow truck. When the light turned green, the car to our right started to move, without a signal, into my lane (while I was still in it). I leaned on my horn so she moved back, pulled up beside Joe, and did the same thing. Joe hit the horn but she didn’t back off. Then, after he gave way, she gave him the finger. Twice. Joe pulled up beside her at the next red light and they had words. She threatened to shoot him. The plates were Maine, but U-Turn figures she relocated from Boston. 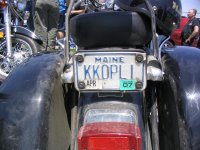 The rest of the way home was uneventful. We stopped at an ice cream shop at the Epsom Circle and Joe bought. It was fine stuff in the sweltering heat. I got a picture of Guppa’s Nomad plate. He spent some time in the SouthEast.

On the way back into the campground, it was just Joe and us. He slowed on a sharp right curve and I went wide so I came out on his left side. I could see him looking in his right mirror wondering where we were. I closed up silently and then hit my horn. I thought for a moment that he was going to jump out of his skin. 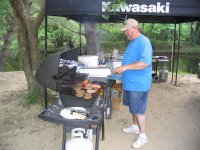 Supper at the campground consisted of leftovers from last night (there was lots) plus hot dogs and hamburgers cooked on the grill by Bobcat Pease. Everyone had their fill. One thing about NEVROC, you never go hungry.

I often wonder why many of the VROC people from other areas don’t attend this fine event. We always have a good time when we go and have developed a fondness for the New England crowd. 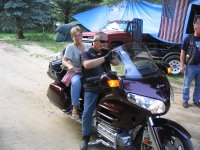 After supper, Dave Overton loaned his 2006 Wing to U-Turn and then let Joe and Karen take it for the ice cream run. Here’s Joe trying to obscure his identity so he won’t be mistaken for a Tupperware rider. Both seemed favourably impressed, so we may have some new converts out there.

It was an early night as I hit the sack shortly after Sandy in anticipation of hitting the road in the morning.
Posted by Jim "Skid" Robinson on 6/17/2006