Last night after I finished posting the Blog, I was laying in bed reading a book and munching on a chocolate bar when I felt another crunch. The tooth I had broken in Combermere, and had the sharp edges ground off as a short term measure in anticipation of a crown this fall, had broken again. This time, all but the outer wall sheared off at the gum line. No pain, but alarming all the same.

It was a clear day in Green Bay as we arose to make the final 500 mile day home. The Weather Channel showed rain up around the Soo moving out. We grabbed a coffee and talked to the Minnesota riders for a bit as we packed up.

US 41 was only moderately busy as we headed north. For some reason, when we crossed into Michigan, I forgot that SR 35 was the shortest way to Escanaba (the hypoteneuse, if you will) and I stayed on US 41. I noticed that things looked different but didn't realize my error until we reached Escanaba from an unexpected direction. Had we taken the short route, we would have avoided a fifteen minute delay at a construction zone on 41. I am becoming more navigationally challenged as time goes by and the GPS is getting to be a necessity rather than a luxury. We connected with US 2 without further confusion. 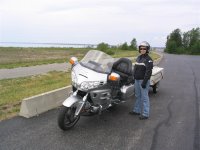 We stopped at a pretty scenic spot in Manistique across from a motel we have stayed at a few times. There is a lighthouse way in the background in the photo. From here, I phoned the dentist and made an appointment for an assessment on Thursday. I also made a doctor appointment for Sandy to get one of her prescriptions renewed.

Further along, we turned north on SR 117 through Engadine, where five of us got speeding tickets on our way to the Rider Rally in Cody Wyoming back in 1988. Nice cop, reduced the ticket from 79 in a 55 to 60. This road took us up to SR 28 in Newberry and a stop for lunch at McDonalds.

We met two westbound Harley riders at the Mickey D's. They were from the Sudbury area, Falconbridge employees, on their way to a HD gathering in Billings, Montana. They will be staying in Glendive, the town on I-94 where I spent four days on that '88 Cody trip waiting for driveshaft parts for my GL1100. I hope their experience there is better than mine. As a continuation of the Small World theme, they know Sandy's cousin Graham.

SR 28 in Michigan is a dull road, tree lined and a straight as anything in Saskatchewan. It was a relief to finally reach I-75 and make the short run to the border. We fueled up with our last chance for (relatively) cheap gas and headed over the International Bridge. The line-up to get into the US stretched to the middle of the bridge and I wonder how long the rebuilding of the US Border facilities will remain limited to two booths. The Canadian line was much shorter and we were into the booth and cleared without any problems after about ten minutes.

We stopped by Mom's house for coffee. It was a short visit but we'll be back on Friday for the Bawating Collegiate and Vocational School 45th Reunion.

As we headed east for the last 188 miles, a large cloud system was moving east with us. From Echo Bay, the road runs due south for about ten miles and it was a race to see if we could get to the point where it turned east before the rainclouds got over top of us. Dead heat as it started to sprinkle a few drops just before we turned. There were a number of systems and I told Sandy I usually got caught at Bruce Mines. Sure enough, as we got to the town limits, the road turned very wet and, over the next few miles, it rained on us. The good thing was that we missed what looked like some very substantial precipitation.

Coming out of Iron Bridge, we got behind a green GL1500. In one of the passing zones, I got ahead and led them through traffic. They stayed tucked in behind us until I stopped at a scenic rest area alongside the Serpent River. They stopped as well to let me know that my right tail light was out. I informed them that the bulb was in my fairing pocket and explained about sticking isolator relays. They were Norm and Shirley? from Mentor Ohio heading for the ferry from Manitoulin to the Bruce Peninsula on their way home from a run around Lake Superior. Three years ago, they were charged by a Buffalo in Custer State Park so we had something in common.

Norm said he would follow me until they reached Hwy 6 to Manitoulin. In the small town of Spanish, we encountered stopped traffic. The CB told me that two transports had collided head on and that there were fatalities. Lucky for us, it happened in the town so we were able to detour around the scene on back streets. I never knew Spanish had back streets. The townspeople were out in force directing traffic and getting us back on the highway.

At Espanola, Norm and Shirley waved and headed south while we continued on the forty miles to Sudbury. Once in town, I again cursed our mayor and council as we traversed what are consistently the worst paved streets we have encountered in our travels. At home, we unpacked and unhooked quickly and settled down.

We were on the road for 30 days, attended VROC at KSL, Americade, NEVROC Laconia and the Custer Reunion. I was wrong when I said it took us 7,000 miles to get to Custer. It was, after recalculating, only 6,300 miles. The total trip was 7,700 miles and we turned over 60K Km's on Quicksilver yesterday.

Now we have almost two weeks before we head out again for California and High Sierra VROC at Topaz Lake Lodge in Nevada. Lots of chores to get done before that happens.
Posted by Jim "Skid" Robinson on 6/27/2006