The early stop yesterday meant that we would not have all day to wander around the Shenandoah Valley. I know that we will need at least a week here to see things so we'll do that some other time.

We did leave Wytheville early and headed up I-81 until we got to Waynesboro where we got on the Skyline Drive. Since our annual National Parks Pass had expired, we bought another one at the gate for $50.00. Based on last year, we should make use of it. 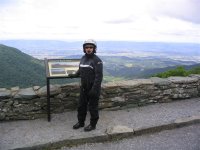 The Skyline Drive is 105 miles long and extends north from Waynesboro to Front Royal. The speed limit is only 35 MPH and the curves are plentiful but not extreme. We cruised at about 70 KPH and found it was a very relaxing ride. Traffic was scarce and we only saw one deer in the road. We stopped at several overlooks as well as the Visitor's Center at The Meadows. I recall the last time I was down here on a guy trip to Arkansas, we came through The Meadows at dusk and deer were so plentiful I lost count. This time, we saw two out in the field but that was it. 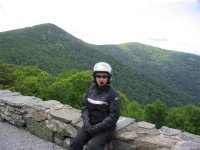 We talked to two Harley riders from Phoenix who were running the full length of the Parkway and Skyline on their way to Americade.

In the first picture, Sandy is standing at the Crescent Rock View overlooking the Shenandoah Valley. In the second, the peak on the left is Hawksbill Mountain which, at 4,050 feet, is the highest point in the Blue Ridge Mountains. 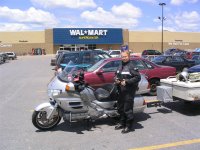 We left the Skyline at Highway 211 to Luray. We had seen the Luray Caverns before so we waved as we went by, but we did stop at the WalMart in Luray on a quest. I enclose the photo because I know that Sherm will be reading this:-) What we were after was an electric heater to replace the one that died. Given Sandy's love of a warm trailer, this was very important. It was strange because we found a 1500 watt ceramic unit that was smaller than what we had before. As we stood in the checkout line, two gentlemen behind us were buying the exact same thing. 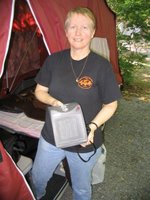 Here is Sandy holding her new pride and joy.

From Luray, we continued west to I-81 and went north. The highway passes through a small part of West Virginia (about 25 miles worth) before entering Maryland. Once across the border, we tracked down the KOA at Hagerstown. They have WiFi but the cafe here only serves food on the weekend. They gave us a menu for an Italian restaurant in town that delivers to the campground. One phone call and it was determined that they do not deliver anywhere on Sunday or Monday. This left us no choice but to go to town. At the intersection of I-81 and US-40, there is one of the largest malls I have ever seen. The name on the front was Hagerstown Center and there were a variety of restauarants around the perimeter. Not being fancy tonight, we chose IHOP and had a pleasant meal. 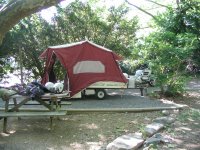 Back at the campground, we spent the evening visiting with our neighbors who were from rural Pennsylvania north of Philadelphia. They have an 1100 Honda Shadow that they haul in an enclosed trailer behind their van. When they take the bike out of the trailer, there are fold down beds, table and kitchen that convert it into a nifty little house trailer. This is a sharp idea I have seen done before but not to such a sophisticated degree.

It rained a bit while we were still up but the sky soon cleared and it was finally time to go to bed.

Tomorrow we will haul for Lake George NY and the Americade where we will look for Gord and Shirley Bailey, whose RV we will make home until the weekend. There will be several VROC people around and we will try to make contact early.
Posted by Jim "Skid" Robinson on 6/05/2006