Today was a mostly Interstate day. We left Hagerstown on I-81 early and rode up to Binghampton NY where we headed east on I-88. I will cast my vote for I-88 being the worst four-lane road I have encountered in the US. Rough and choppy, we spent most of the time in the passing lane since traffic was light and it was smoother.

When I got planning how to get from I-88 to I-87 in Schenectady, it became obvious that it was almost a case of not being able to get there from here so I stepped back and looked for an alternative. We headed north off 88 to Amsterdam on a pleasant secondary road and then caught another over to Ballston Spa. Once on I-87 north, the motorcycle density increased as riders from all over were converging on Lake George.

Just before my exit, I came upon a group of Kawasaki’s out on a demo ride. I felt a sense of kinship but they never knew it since I was riding Tupperware. 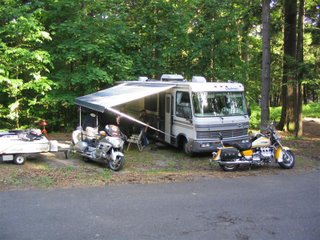 We found Hearthstone Park on Highway 9N and there, just inside the entrance, was the large RV with Gord, Shirley, Terry and Ray from Sudbury. Here’s our home for the next few days. Terry and I went into town and got some steaks to have with the fixin’s that Shirley had put together for supper. We spent the rest of the evening visiting.
Posted by Jim "Skid" Robinson on 6/06/2006

Nice pictures and stories. I enjoyed them very much. Hope to see you in Custer.