Yesterday, Friday, was a slow day around the Lodge. Chunk and I ran up Highway 28 to Deal’s Gap first thing in the morning to see if the shipment of Kochmann boots had arrived from Germany. No luck. We then cruised back down to Robbinsville so Chunk could fuel up. I managed to find some Wint-O-Green Lifesavers for Sandy while there.

Back at the lodge a few more VROCers rolled in as clouds built up and then the rains came. It started with a good lightning show and we spent the rest of the day under the awnings watching the liquid sunshine.

Fred cooked ribs and pork loin for supper along with the usual plethora of side dishes. Here’s a shot of the grill for Sherm. 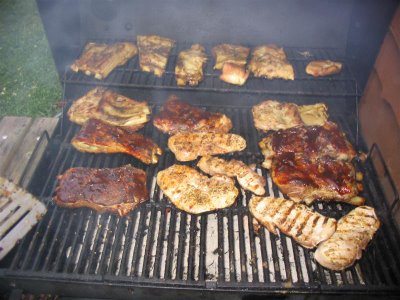 We eventually adjourned to the campfire and enjoyed the company until bedtime. Scooter and Jan made it over from Cleveland Tennessee and Highside and Julie had their first weekend away from their seven-month-old twins. It was a good evening except when we went to bed and found the electric tent heater wasn’t working. Examination showed a broken wire in the heating coil. It will have to be fixed or replaced since Sandy can’t get by without it.

Today dawned bright and clear. We put together a group to go for a ride. The first part of the trip took us to Robbinsville where we took a wrong turn in search of the Cherohala Skyway. Tom Sigler relinquished the lead after this and Coyote, armed with his GPS, took the point. The Cherohala is a scenic sweeping road that runs over to Tellico Plains Tennessee. 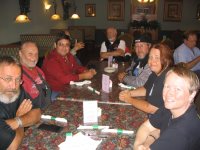 In Tellico, we stopped for food. Here is the rogue’s gallery at lunch. From the left, we have Jim Ayers, obey, Coyote, Tom Sigler, Slammer, Steam, Freebirds and Sandy. It was a good group to ride with, and we took our time on the Skyway.

After lunch, we fueled and then headed back with a side trip to Bald River Falls.

Coming out from the falls, Coyote 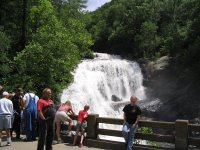 took a right on a little road heading up the mountain. There were some questions about just where he thought he was going, but he had the GPS so we followed him. Amazingly, after getting very narrow, it did return to the Skyway and saved us about eight miles.

Apparently I wasn’t paying attention soon after this because I was the only one in the group who did not see the two rattlesnakes on the road. Jim Ayers said one of them struck at Steam’s leg but Jim ran over it immediately after that. I did see one large one as we came down the North Carolina side. 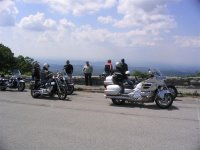 There were several stops at scenic lookouts both ways. Here is one of them on the North Carolina side. Near the eastern end, I took the lead and we rode a twisty rough road through the Joyce Kilmer Forest to Highway 129. From there we headed up to Deal’s Gap. There were myriad sport bikes preparing to run the Dragon so we headed back towards KSL on 28. Some of the group stopped at the Fontana Dam.

I wasn’t in the groove today. My riding wasn’t smooth and that took away from the experience but any ride is better than no ride.

When we got back, Sandy and I took down the awning and stowed some of the gear to enable us to get an early start in the morning. We are now sitting around and waiting for supper. Tomorrow we try for the Shenandoah.
Posted by Jim "Skid" Robinson on 6/03/2006