We arose to overcast skies. After Shirley served breakfast, Gord unlimbered the motor home to take it to a garage in the village to get a seized ball joint replaced. We went with them while Terry took his Valkyrie to the Tour Expo trade show to have a new rear tire installed. We arrived at Thompson’s Garage and left the RV with assurances that it would be done in a couple of hours.

The Tour Expo was spread over two locations. The first was a community centre type building a couple of blocks from where we left the RV. We each paid the $10.00 entrance fee and started wandering through the displays. I got a subscription to Motorcycle Consumer News, and some technical socks. Marc Souliere (who authored the Hollywood Challenge at Combermere) and his friend Peter from Ottawa were there as well as Kenny Rowe from Rochester. I met Lewis, proprietor of Electrical Connection. I knew his family knows Sherm but found they hadn’t heard about the wreck so I filled them in. Lewis also showed me a new interface that he has developed to link a GPS into the GoldWing sound system. It looks like we will be doing business. 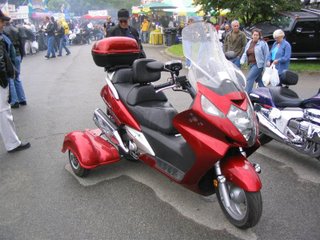 fter finishing that building, we caught the shuttle bus to the main venue at the Million Dollar Beach. Everything you could ever imagine for a touring motorcycle was here. Sandy and I bought headskins, cloth liners that go on your head before you put on the helmet to absorb sweat and stop itching. Then we got two sheepskin pads to go on the bike seat. Sandy got a small bag of kettle corn. We saw terry’s bike at the Dunlop booth waiting for a tire and met Rich from Rochester who was having tires put on his Wing. Unfortunately, it started raining about noon. It was a slow steady rain that would keep on for the rest of the day. On the way out, I saw this SilverWing with training wheels and had to get a picture for Slammer.

We caught the shuttle bus back and returned to the garage where the RV was still jacked up. This was not a good sign. Fred explained that they had ordered the two probable GM ball joints but that neither fit. It seems the RV was built on a step van chassis and the correct part would not be in until the morning. We decided we would camp out in the garage parking lot and Fred loaned us his very nice loaded Ford truck to go back to the campground to pick up what we needed. We left Terry a note, stopped at the liquor and grocery stores, and returned to the garage. 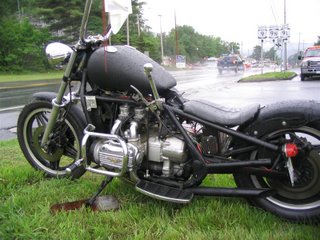 I have to mention this motorcycle that was for sale in front of the garage. It started out as a 1981 GoldWing but I direct your attention to the conventional gas tank, hand shift and clutch, rigid frame and ape hangers. This wonder of originality can be yours for only $2,500 US.
As the rain fell, Gord and I sat under the awning and watched wet motorcycles travel up and down Canada Street. Terry arrived after a while and Ray pulled in to visit. The six of us walked over to the Howard Johnson’s buffet where we tried to put a dent in their food inventory. We returned to the RV and Ray headed back for the campground. The rest of us watched movies on the DVD player ate munchies and a few drank some beer. It took several attempts to get everyone settled. It took several more to get everyone to go to sleep. It looks like we finally sacked out, after bouts of hilarity, about 3:30 AM.
Posted by Jim "Skid" Robinson on 6/07/2006

Hi Skid. It was a pleasure meeting with you on Wednesday, June 7 at the scenic pull off over looking Lake george. Thanks for taking the photo of my sons and I. The only comment is that our names are Bill Sr., Bill Jr., Tim and the "Harley guy" is my son-in-law Bryan.
Travel safe.
Bill Grimes, Long Island, NY