The rain had started up again by the time we got up, but it ended just before we set out for the Circle Restaurant for Breakfast. The Deluxe Breakfast included scrambled eggs with sausage and ham mixed in, bacon, toast, home fires and coffee for the whopping sum of $4.50. This was a good deal.

After breakfast, we returned to the campground and formed a small group (about eight bikes) for a ride to the base of Mount Washington. Joe led us up I-93 and got off at Lincoln so we could ride the scenic Kancamagus Highway. On 93, we saw a Border Patrol checkpoint on the southbound side. Near as I could figure, they were looking for wetback Canucks trying to infiltrate the US of A. 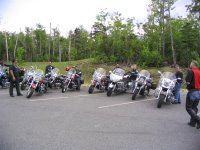 The Kancamagus was a nice 32 mile ride. Not as challenging as North Carolina, but pleasant. We stopped at a lookout and I saw an older couple who had been in the same gas station in Lincoln. I started talking to them and found they were from Israel on a two-week visit to the US. Week one was Miami and week two was touring the North East. The lady wondered why all the bikes were around so I told her about the Laconia Classic. Later, they were pulled over on the side of the road while she waited to take our picture as we rode by. Just before the road reached Highway 16, the troopers had a speed check using laser freehand. Back home they use tripods. Luckily, we had been warned before we got there.

We by-passed Conway on West Side Road in an attempt to avoid the construction, but slipped up at the end and got into North Conway right where the dirt started.

Mount Washington had a horde of bikes at the base, but not many were going up due to high winds and cold temperatures. We took a break and some went for food while I accosted a couple with a 2002 Nomad who had never heard of VROC. I gave them the website. 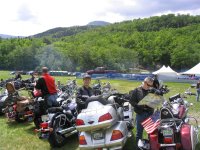 Here’s a picture of Sandy with the peak of Mount Washington just visible in the background.

We headed back with some local knowledge and by-passed Conway on the east side. This time we missed all the construction. In Wolfeboro, Yolanda’s clutch started acting up after a brutal wait for a stop sign on an uphill grade. Did I mention it was hot again? Luckily, with Jersey Dave at the back with a CB, we were able to hold the group with a minimum of trouble until they got going. At Alton we stopped for gas and a fellow on a Harley with a Diablo patch hit Joe up for a metric allen key. There was some good-natured ribbing over this.

At the campground, more people had arrived including Ron Russell who was sporting a new Vulcan. He still had his BMW LT, but was back in the cruiser fold. A group of us headed into Concord for the traditional dinner at the Longhorn Steakhouse. I had Prime Rib and Sandy had baby back ribs. Service and food were excellent.

On the way back, Sandy and I were able to spot a glove that we saw fall from one of the bikes on the way to the restaurant so we picked it up and returned it to the rightful owner at the campground.
At the bonfire, Ron Russell, Steve Cifra, RiderMike and I sat around talking movie and TV trivia and about hot actresses who are below the radar. It seems we have similar tastes. Eventually Ron went to bed and, about midnight, Steve, Mike and I managed to get the fire put out before we turned in.
Posted by Jim "Skid" Robinson on 6/15/2006