More rain this morning. Nothing new about that. There are a series of shuttle buses that look like trolley cars. One turns around right in front of the campground and goes downtown. Gord, Shirley and Terry hopped on and went to town while Sandy and I stayed behind.

I sorted and posted all the bills I had since the beginning of the trip. Then we reorganized our gear and repacked the trailer and saddlebags. Finally, it was time for a nap.

Gord went up to tell the park office that we wanted to stay until Sunday, as they had told him to do. To our surprise, we were informed that our site had been rented to someone else for Saturday night and we would have to move. Fortunately, Ray’s crew had paid until Sunday and all except Ray were pulling out tomorrow. The 31 foot coach would fit. 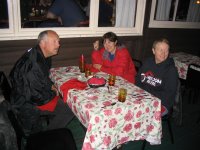 The day took a turn for the worse when both campsites joined forces and walked across the road to the Raintree Restaurant. The prices were substantial so we expected service to match, That didn’t turn out to be the case. Our server took a long time to bring menus and our food took over and hour to arrive. She took Sandy’s food, coconut shrimp, to the wrong table and, by the time we discovered it, they were cold. Things went downhill from there and the server and I had an exchange of opinions. I won’t be on her Christmas list and she got a $0.01 tip. Unfortunately, I had no Canadian pennies. I had a few words with the owner as well. I can’t recommend this place. 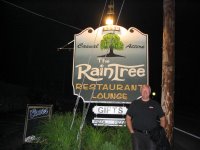 Here's Terry standing by the sign of the restaurant that will have no fear of us ever crossing their threshold again.

We wandered back to the campground via Ray’s Hellova Deli where Sandy and I bought ice cream bars. We then sat up for a while discussing life, the universe and everything before going to bed with hopes that tomorrow would bring better weather.
Posted by Jim "Skid" Robinson on 6/09/2006