It rained overnight. To be really appreciated, rain must be heard while trying to sleep upstairs in a camp with a tin roof. Luckily, the sky was clear by morning when we loaded up and bid Jerry good-bye.

We stopped at a Mickey D’s in Gorham NH to have our usual breakfast and found a WiFi connection. It gave me a chance to post the Blog for the day before and get the mail. This would prove to be the last connection we got for several days.

As we came out of the restaurant, it started to spit rain. Heading out of town, it picked up in intensity and then rained off and on all the way to Conway. It was clear when we passed the entrance to the Mount Washington Auto Road but it will be the twelfth of never before I take a bike the eight miles (last two dirt) up to the top of the mountain. The sheer drops would do both Sandy and I in. Call us chicken if you want.

We got to the tourist town of North Conway to find the road torn up. As we were sitting waiting for a flagman to let us go, he indicated we were to wait while a loader came out on the road ahead of us. The loader operator called the flagman over and he came back and told us to go first since the operator didn’t want to get our bike dirty. Once rolling in the dirt, I saw a water truck coming towards us wetting down the dust. He was spraying from two nozzles on the front bumper but, as I hunkered down for the worst, he shut off the one on our side. I think I will put these guys on the Christmas card listJ 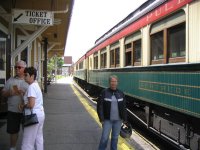 The temperature had risen and the sun came out as we rode through North Conway. I saw a train station posted as the Conway Scenic Railway. We pulled in and found the train tour to Bartlett was leaving in twenty minutes. Why not? We bought tickets and climbed aboard the First Class car. The ride eleven miles to Bartlett was slow and most of the scenery consisted of trees with scenic glimpses of the mountains and occasional rivers. We had a good time talking to a lady from Washington DC and her 82 year old mother. At Bartlett, the engine ran around the train 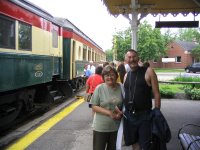 to be at the head end for the return trip. The return trip was marred by a hysterical screaming child of about three years old. I feel comfortable in saying that, by the time we got to North Conway, this was the most hated child in New Hampshire.

When we debarked, who did we find in line to climb aboard but Bob and Cindy, the couple from Nova Scotia we had met a couple of days before in the KOA at Twin Mountain. They had been to Laconia and were now sightseeing. The rain had caught up to us while we were on the train so we suited up again and set out. 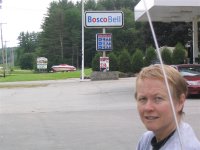 We rode on down Highway 16 and caught Highway 28 towards the campground. Near the end, we saw a gas station named BoscoBell. Since Boscobel is the town in Wisconsin where the other VROC gathering is taking place this weekend, we figured we would get a picture to prove that we CAN be in two places at once.

We got into the Lazy River Campground about 4:30. There weren’t too many there, but Jersey Dave had his camper up. We set up and then ran down to the Circle Restaurant for supper. This is our usual breakfast hangout. I had the special 16 oz. T-bone for $11.95. You wouldn’t think it would be very good at this price but I was pleasantly surprised. 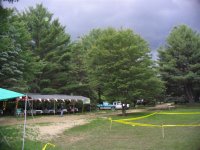 Back at the campground, the black clouds built and then the rains came. A few others arrived including Cheyenne Dave (from Cheyenne Wyoming) on a Drifter and his son Matt from Rockford Illinois on a new Harley. We helped them set their tent up between rain squalls. The rest of the time was spent under the NEVROC awnings catching up and swapping tall tales until bedtime. By midnight, the rain had stopped.
Posted by Jim "Skid" Robinson on 6/14/2006